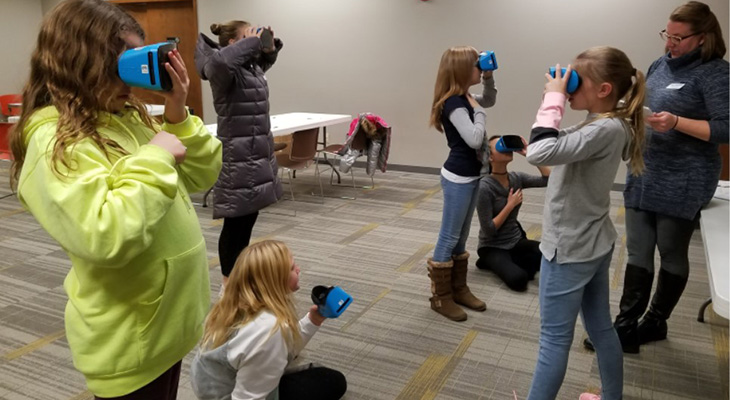 We need as many people as possible using their skills and ideas to improve the world in which we live. Girls are being introduced and encouraged to consider careers in the fields of science, technology, engineering, and math (STEM) including computer sciences by University of Illinois Extension’s 4-H programs in Fulton, Mason, Peoria, & Tazewell counties.

In Spring of 2018, Microsoft released a new study entitled “Closing the STEM Gap” in which it states, “Despite the high priority placed on science, technology, engineering and math (STEM) and computer science education across the United States, the fact remains that only a fraction of girls and women are likely to pursue STEM degrees and careers. The U.S. Bureau of Labor Statistics predicts that technology professionals will experience the highest-growth in job numbers between now and 2030. Failing to bring the minds and perspectives of half the population to STEM and computer science fields stifles innovation and makes it less likely that we can solve today’s social challenges at scale.” The 4-H youth development program seeks to solve this problem by engaging young women in STEM pursuits and exposing them to technological careers.

In a recent example of this effort, 4-H Youth Development Educators Judy Schmidt and Emily Schoenfelder facilitated a session of GEMS (Girls Excelling in Math and Science) focused on computer science. GEMS is an extra-curricular, STEM group offered by the Morton Branch of AAUW (American Association of University Women) and supported by the Morton Public Library.

Meanwhile, Schoenfelder helped the girls explore ocean depths, the human lung, and other worlds through virtual reality goggles and a Google app called “Expedition.” Additionally, they discussed current and future uses of virtual reality, paying special attention to the types of careers that might use this technology. Most of the participants had never before experienced virtual reality and were impressed and excited by the opportunity.

After the session, 25% of the participants indicated a greater interest in pursuing a computer science career than prior to the session. Moreover, 50% revealed increased confidence in their ability to learn more on their own, while 83% showed a more comprehensive understanding of computer science and virtual reality overall. With the help of 4-H, these young women will blaze trails through the technological world.