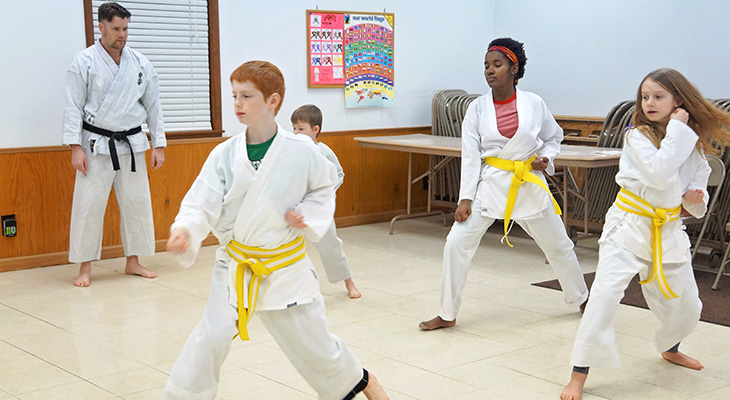 For the past 12 years, youth participating in the 4-H Shotokan Karate Special Interest (SPIN) Club have gained self-esteem, self-defense skills, fitness and health benefits, confidence, and mental focus. The Peoria County based club has attracted new youth to the 4-H program as well as provided leadership development and longevity in the program for teens.

Since the start of the club, over 400 youth have been introduced to the 4-H program and the traditional Japanese Martial Art of Shotokan Karate. Over 2/3  of these youth were new to the 4-H program with several of them participating in at least one other 4-H program, activity or club. Positive youth development is the cornerstone of the 4-H program and providing programs with experiences that influence or produce those positive outcomes is the goal.

Eleven-year-old Shephrah Foster described her karate experience, “I’ve wanted to do karate for years, ever since my brother started Kuk Sool Won. Before I started, I always used to look down on myself and feel unable to do much. But after I started this I gained confidence and started to believe in myself. I never thought I’d ever be a yellow belt.”

Karate instruction in the club is conducted in a safe, formal manner just as is found in Japan, with an atmosphere of courtesy and mutual respect that is an important characteristic of a traditional karate class. Members in the 4-H Karate club work both individually and with other members on partner drills to learn and refine their karate techniques. Working with and helping partners builds character and promotes the concept of generosity.

“My son, has been participating in the 4-H Shotokan Karate program for over a year now,” explained 4-H dad Jason Bain. “I have seen great development in his character, coordination, and confidence. Thanks to the program, he has grown in his ability to focus and organize goals, along with his patience at home. I have great pride in seeing my shy, introverted son gain enough confidence to be able to complete a 4-H karate presentation in front of a panel of judges. Even though he is only beginning his karate journey, his strength and balance have increased greatly.”

Many 4-H Karate club members remain active for several years and advance in rank. “We have had a few youths that started with the first meeting in 2007 at ages 9 and 10,” mentioned Peoria 4-H Program Coordinator Cathy Ludolph, “and continued until they aged out of 4-H. They reached the Brown Belt level, just one rank under Black Belt. They have continued their karate training as young adults (when college classes allow) at one of the other Shotokan Karate Dojos in the local organization with the goal of becoming a Black Belt.”

The club also offers opportunities for intermediate and advanced members to develop leadership skills by leading the group with warm-up exercises and assisting the instructors with beginner students. All members have the opportunity to increase their public speaking skills by participating in the annual 4-H Karate public presentations contest. “The Black Belts that judge this event always mention how impressed they are with the kids’ public speaking skills and level of knowledge they have about the karate topic they have chosen to research and present,” mentioned Cathy.