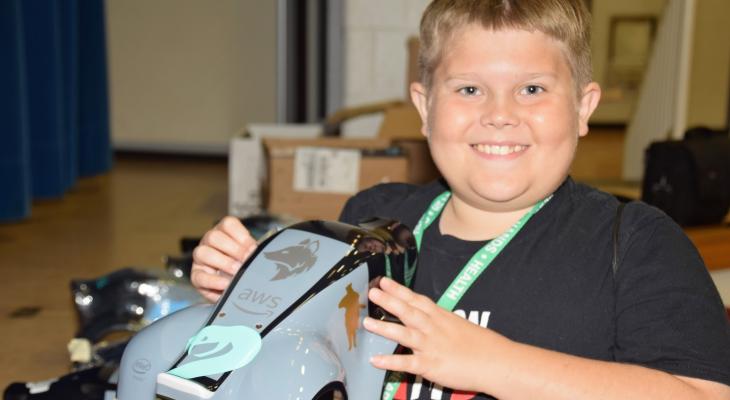 How do cars learn to drive themselves?  That is exactly what twenty-five middle school students learned as part of the fourth annual STEM Academy put on by University of Illinois Extension Fulton-Mason-Peoria-Tazewell Unit, Pearl Technology, Richwoods Township, Caterpillar, Tri-County Regional Planning, and Amazon Web Services earlier this summer.

This year, participants were able to learn about, train and race 1/18 scale autonomous vehicles, while learning about artificial intelligence, reinforcement learning and computer coding. A unique aspect of this camp is the amount of one-on-one time participants get with local Caterpillar engineers and programmers.  One participant highlighted his interaction with the volunteers as his favorite part of the Academy, “I learned so much from him– he was very patient and taught me a lot about coding I didn’t know.”

The U.S. Department of Labor statistics stated that in 2015, there were nearly 8.6 million Science, Technology, Engineering and Math (STEM) jobs, with 45% of those being computer occupations. The demand for workers skilled in computer science is projected to continually increase (Bureau of Labor Statistics). The need for more youth to be able to see themselves in local STEM careers is one of the reasons that STEM Academy began four years ago.  Each year participants work on a week-long project with local STEM industry volunteers. They also hear from local STEM employers about career pathways and important steps to take while they are in school.

Academy planners are excited about the outcomes of the camp because when asked what words they would use to describe themselves throughout the week of STEM Academy, participants said words like: innovators, engineers, and problem-solvers. Ninety two percent of participants also said that STEM Academy made them more excited to take STEM classes in school.

Because the autonomous cars they taught to drive were not even available to the general public at the time of the camp, the group will reconvene in the fall when the cars are released so each participant can race their own vehicle, which they will get to keep thanks to additional financial support provided by Pearl Technology and Richwoods Township.

Past STEM Academy projects included using an Arduino to create a secret-lock box, using a Raspberry Pi to create a mirror that could display the local weather, learning about amateur radio and making a live call to the International Space Station.  STEM activities such as this are an integral part of the 4-H youth development program through University of Illinois Extension.