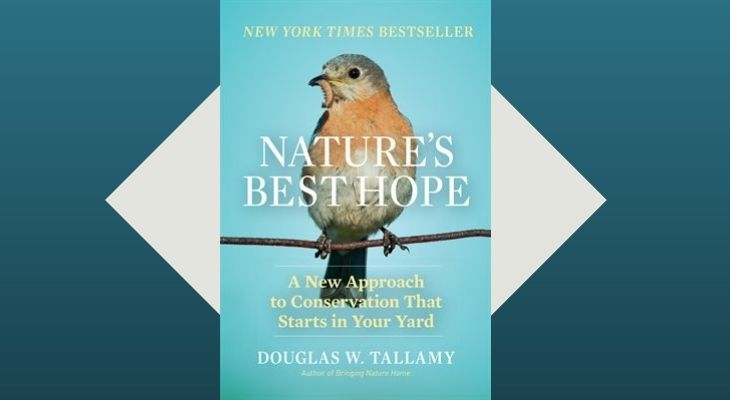 One of the less mentioned benefits of being an Extension Master Gardener or Master Naturalist is the time you get to spend with other volunteers learning together and from each other. While shelter-in-place and social distancing protocols are being followed, University of Illinois Extension staff created virtual book study groups for our master volunteers that began in late March with the book Nature’s Best Hope and have continued to a second book.

“We read the book on our own and then use Google Groups and Zoom to discuss the book virtually,” explained Nicole Flowers-Kimmerle, horticulture educator. “There were about 10 participants in each group and we each read the newly released book, Nature’s Best Hope by Douglas Tallamy.”

While both groups read the same book, there were interesting differences in the perspective of the various participants. However, both groups concluded that working to make positive changes for the environment was a matter of importance.

In the book, Tallamy discusses ways to bring conservation to our home landscapes. He discusses the importance of native plants to create areas that provide ecological benefits and ways a homeowner can make small changes that have a huge impact on the environment.

“The study group participants were invited to complete a survey about their experience and what they learned,” Nicole stated. “The completed surveys showed they increased their knowledge of native plants, biodiversity, and supporting food webs from low to high or very high.

“I am thinking of planting a redbud and dogwood as understory trees and adding a different oak to our yard,” said Extension Master Gardener Janine Donahue.  Others in the groups noted plans to add native plants to their yards also.  All participants surveyed reported that they are very likely to plant native plants in their yard to support ecological food webs and biodiversity after participating in the book study.

Both groups are planning ways that they can use what they have learned from Nature’s Best Hope to create educational programs that can be shared with others to help inspire them to make changes in their yards also.

The participants noted that leading by example and making changes to their yards is a way of showing the importance of using private land to support conservation efforts. Extension Master Gardener Ellen Denler stated, “When neighbors see that we are doing things differently, they will adjust and maybe try some other way too.”

Both groups have moved on to their second book and welcomed new study group participants. “Our book studies have been a good way to offer continuing education in an alternative form to more traditional in-person meetings that still gives our volunteers a way to connect and learn from each other,” concluded Nicole.

Nicole Flowers-Kimmerle is a Agriculture and Natural Resources (Horticulture) Educator for Fulton, Mason, Peoria and Tazewell counties.  She completed a bachelors of science degree in crop science at the University of Illinois, and a master’s of science degree in agronomy with an emphasis in weed science at the University of Wisconsin-Madison.  She has also worked at Montana State University as a research associate where she worked on weed control in sugar beets and barley.  She taught high school chemistry and other science classes where she was able to teach students in both the school garden and greenhouse.  She works with both the Extension Master Gardeners and Extension Master Naturalists.