Hover Flies may Look Like Bees but are Beneficial Flies 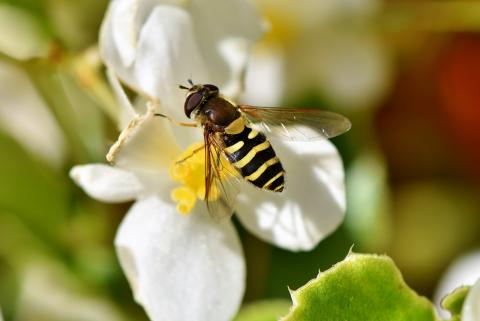 What's black and yellow and feared all over? It's a bee. It's a wasp. No, it's a hover fly? We, along with most other creatures, are programed to fear anything with black and yellow coloration. Some creatures such as hover flies take advantage of our learned response by mimicking the feared stinging creatures.

Although there are numerous species of flies in this group most hover flies are about a quarter inch long with black and yellow bands. Their convincing appearance may illicit a shriek from us, but hover flies are true flies so they cannot sting. You may know hover flies by other names such as sweat bees or flower flies depending on their habits and habitats. They belong in the fly family Syrphidae so bug geeks also refer to them as syrphid flies.

I realize it's tough to focus when fear clouds our vision, but if you look closely you will see hover flies like all flies have one pair of wings while bees and wasps have two pairs. Count the wings. Two wings fun; four wings run.

Hover flies are much better at hovering than bees and wasps. With wing beat alone they effortlessly hang out over flowers until the right moment to descend to feed on flower nectar or pollen. They are true foodies as they meticulously enjoy each morsel. Their slowness makes for great photographs. In dry years these same insects may land on us to gather a drink of sweat (also known as insect Gatorade™); hence, their sweat bee name.

Insect stings are no fun and for some people can be life threatening. In Illinois several wasps and bees are capable of stinging. However, since their goals in life are feeding and reproducing (we help with neither of those goals) bees and wasps prefer not to sting. There are smaller, darker bees called sweat bees that can also hang around us and these can sting if you accidently squish them.

Hover flies are the gentle gents in the garden. They are significant pollinators and their larvae are essential predators of garden pests. Hover fly larvae are legless with a pointed head and broad tail end. The larvae love a good meal of aphids. Hover fly larva suck out the aphid juices and toss the exoskeleton. According to Cornell University each larva can consume 400 aphids before they become an adult fly. Next time you see a bunch of aphids on your plants be sure to look closely. You may see a very happy maggot in the mix.

Next time you see black and yellow, take a deep breath and observe. You might just see an unexpected show.