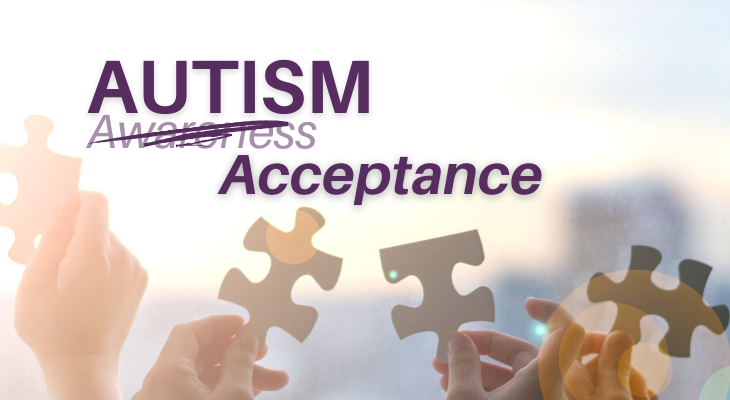 Greetings from the Autism Program at University of Illinois. Our friends call us TAP.

April is Autism Awareness Month. This year, there seems to be a change in the wind. Many are replacing awareness with acceptance. According to the Centers for Disease Control and Prevention, 1 in 54 children are diagnosed with autism, and this number is on the rise. I find that, often, families have at least one member who is neurodiverse, or who has a “brain that works differently.” And, if this condition is present in most families, we are all at the very least aware of autism. How do we actually get to acceptance?

In reality, there is an elemental lack of understanding of autism. Surprisingly, this occurs at every level, from parents of children with autism to pediatricians to teachers to autistic individuals themselves. Let’s take some time here to debunk some myths and set out the facts.

Autism is a neurodevelopmental difference that effects the brain’s ability to process social information and causes a primary need for sameness. This manifests itself in communication deficits that range from a lack of verbal (or spoken) language to difficulty reading social cues and following social norms such as engaging in small talk.

If you think about it, when did you learn to look up when your name is called, or stand in the “circle” when you want to be included in a group? Who taught you, beyond “please” and “thank you,” the social niceties that make one seem friendly, approachable, and someone you want to include in a group? For a person with autism, many of these social nuances need to be explicitly taught. Therefore, they can appear awkward, odd, or aloof.

The myth that arises from this difference in brain function is that people with autism prefer to be alone and have no desire for relationships with others. Their often blatantly truthful or abrupt interactions can be interpreted as intentional, and therefore the autistic person is avoided, left out, or even bullied.

The autistic brain’s need for sameness manifests itself in what diagnosticians call restricted repetitive behaviors. In essence, the autistic brain requires external input to regulate itself. This can include repetitive motor movements, strings of memorized language, or intense focus on one specific topic or part of an object. People with autism often have trouble with transitions or unexpected change. They also may have aversions to sensory input, such as seams in clothing, lighting or sound, or taste, smell and texture of certain foods.

While  there are the things that are difficult for the autistic brain, when supported there is much to be celebrated! Autistic individuals are prone to having areas of high interest, based on their need for sameness. This often results in their brain’s ability to focus, remember, and learn at an intensely deep level about a specific topic or skill.

People with autism are known to be exceptionally reliable employees, honest critics, and loyal friends. They are often able to recognize patterns which make them valuable assets in jobs requiring detection of errors in large quantities of data. Because social norms may not be on the autistic radar, people with autism are often very accepting of others’ differences.

And yet, autistic individuals experience high rates of discrimination. Largely due to the social interview and job review process, over 80% of autistic adults are either under- or unemployed. Loneliness, social isolation, and bullying can contribute to mental health challenges, including anxiety and depression. People on the autism spectrum are five times more likely to be victims of suicide than their neurotypical peers.

A primary force that is moving the world from mere awareness to full acceptance is the neurodiversity paradigm which embraces autism as a difference rather than a disorder. And while this perspective focuses on a “different, not less” attitude, proponents of the paradigm recognize that autism comes with several disabilities that require different supports and interventions at different times throughout the lifespan.

So, how can teachers, employers, family and peers create a more inclusive, accepting environment for people with autism? Here are some tips:

MEET THE AUTHOR
Jeanne Kramer holds a doctorate in speech-language pathology and mom of four grown children, one of whom is on the autism spectrum. While the first 20 years of her career focused on brain injury and stroke, motherhood was the training ground for her present role at TAP. She is now committed to building capacity for autism services, training current and future professionals, and delivering resources and support to children, families, and university students in the autism community.