The big wasps of summer 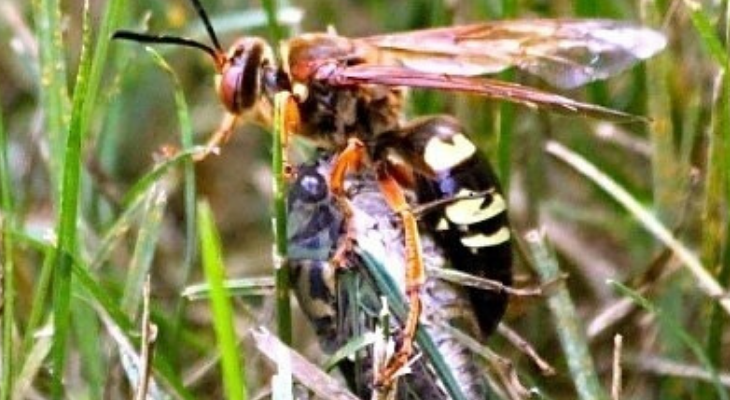 Cicada Killers and the Great black wasp may have already started menacing gardener. However menacing they are in their façade, they are just simply trying to get some nectar from the flowers. About this time of year, inquiries from the public start to flood Master Gardener ran help desks because they start emerging from their winter homes that are nests underground.

Cicada killers are solitary wasps that look like big black hornets with yellow banding on their abdomens. These insects are considered beneficial because they exert a form of biological control on the annual cicada population. Cicada killers are non-aggressive despite the male's behavior of approaching intruders to the garden to rule out that you are not another male cicada killer. The males are unable to sting. The females can sting but only when handled or disturbed because they lack the instinct to guard their nest like the honeybee.

The singing of the annual cicadas causes the adult, cicada killers, to come above ground and out of hibernation. On their search for annual cicadas, they will stop and drink nectar and water from your garden. Once the female cicada killer has found and paralyzed an annual cicada, she will carry it back to her underground burrow. The female places her prize in a nest cell, lay her eggs on it and seals up the cell. The larvae hatch in a few days and begin to feed upon the annual cicada before they form a cocoon to pupate for the winter and early spring. Adults then emerge from their burrows, the following year, after leaving and unsightly mound of dirt in areas of bare ground or sparse vegetation.

The great black wasp is large smoky black with a blue iridescence that is also a beneficial insect because the adults pollinate flowers and the mated female lays eggs on paralyzed grasshoppers or katydid. She gives each egg 2-6 paralyzed victims in her underground nest. Her tunnel consists of multiple egg chambers before she closes the tunnel. When the eggs hatch, the carnivorous larvae will have nutrition before they pupate in the ground throughout most of fall, winter and spring. This wasp has also demonstrated the ability to use tools by using materials around the nest to pat down the tunnel opening after she has filled it with soil. A female wants her young to be protected from the winter and predators. She is calm like most solitary wasps. As with the cicada killer, great black wasp male cannot sting and spend most his time running off other males.

University of Illinois Extension suggests to planting ground covers and grass to avoid bare spots, put down mulch and use irrigation to deter nesting around your home. It is highly discouraged to kill this beneficial insect unless safety of children and pets are an issue.