Eight-Legged Jumper Not Such a Threat 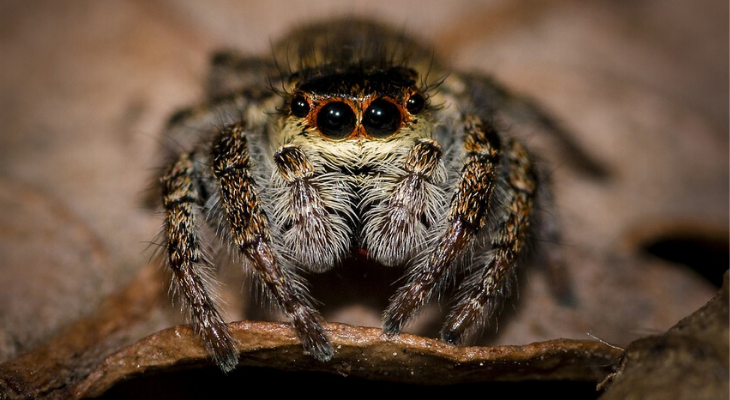 It’s the time of year that people adorn their homes with horror-movie-sized black spiders and webs in hopes of prompting the public’s arachnophobia — their fear of spiders. In contrast to most people, I suffer from arachnophilia — a love of spiders. This is due to my background working with beneficial insects to help lower the populations of unwanted pests in the garden.

People tend to notice the spider population in the fall because they have had all spring and summer to grow and build large webs. The majority of our spiders in Illinois are incapable of biting humans and injecting venom. Even if they did give you a bite, it would typically be comparable to the bite of a more dangerous arthropod, the mosquito. If we were to adorn our doors with the truly scary and dangerous, we would have giant replicas of mosquitoes perched on inflatable pools of standing water.

I have been bitten by one of our most common black spiders: a cute little jumping spider, less than ½ inch in length. When I picked it up, it defended itself. Not being able to produce enough venom to hurt me, it felt like a pin prick. After I let it back down, it looked at me, then quickly scurried away. Jumping spiders have great eyesight, hiding at night in in a silken retreat woven into crevices and cracks, pouncing on their prey, sometimes much larger than themselves.

Jumping spiders do not have specialized legs. They instead use an internal hydraulic system that changes their body fluid pressure, extending their legs, and letting them jump up to 50 times their body length. They use a line of silk to act as a drag line in case they need to stop mid-jump. Another fact to make these little guys less threatening and more interesting: the males sing and dance to attract mates. It’s worth looking up a video online!

People often blame spiders for skin conditions that they cannot explain. However, unless you are sleeping on the basement floor, the likelihood of a spider getting in bed with you is virtually nil. Even if a spider would get onto your bed, a bite is unlikely to occur. Spiders have no incentive to bite humans. They are not bloodsuckers, and most likely are not even aware of our existence.

Spiders, in fact, provide humans with great services like eating mosquitoes, flies, and cockroaches. Without spiders, our crops and home gardens would be overrun by pests: Spiders are touted as the most effective predators in a landscape. Scientists are also studying spiders’ silk production, which has a higher strength-to-density ratio than steel, and their venom as an alternative pain reliever.

Next time you encounter an eight-legged horror, consider their services to your home before you act. Maybe set him free to scare up a mosquito meal that you would rather not encounter.