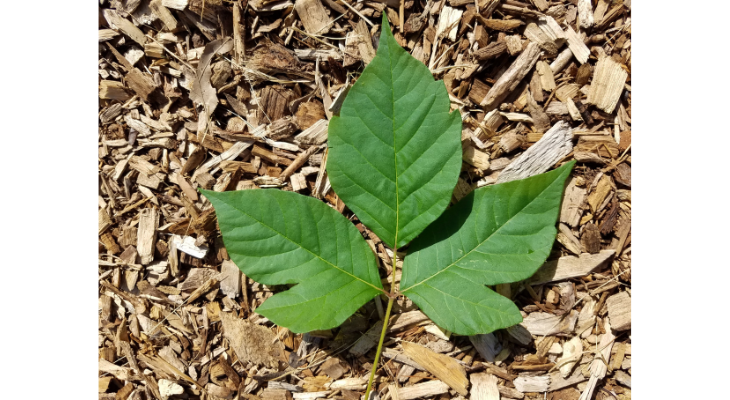 Among the plants that grow in the Illinois landscape, poison ivy (Toxicodendron radicans) is perhaps the most notorious.  This plant is certainly well known by name among most gardeners, nature goers and outdoor folks, but many are unable to identify it correctly in the field.  The result of misidentification and subsequent exposure to the resinous oil, called urushiol, produced by this plant can cause anything from an itchy rash to a severe allergic reaction.

For many that have severe reactions to poison ivy, the identification of this plant has been forced upon them for fear of another emergency room visit.  For me, this is one of the first plants I can remember identifying down to species.  As early as cub scouts, I remember learning the mantra, “Leaves of three, let it be.”  It took some time before I could relate the handy phrase to the plant physiology it refers too, but it is most definitely a useful mnemonic, although a bit inaccurate.

Poison ivy grows in a variety of forms from a small shrub of varying heights up to 3 or 4 feet to a climbing vine.  It readily spreads by roots and typically exists as a patch in partly shaded woodlands and woodland edges.  It is also quite prevalent as a vine, but leaves remain one of the best identification features as they are consistently the same on either growth habit.

Poison ivy doesn’t technically have “leaves of three” as the phrase implies.  Instead each poison ivy leaf is a compound leaf containing 3 leaflets.  This may seem like an arbitrary point to some, but to a true botanist it is a very important detail.   The key identification feature of this plant is the grouping of 3 leaflets per leaf.

The leaf margins of poison ivy are mostly entire, meaning they lack any kind of toothed or jagged edge.  Poison ivy will develop an irregular toothed pattern along the leaf margin, but they are broad, blunt teeth which do not have sharp points like other species.  This can be another very key identification feature and many refer to poison ivy leaves with a single tooth to one side as a “mitten” shape.

Although every poison ivy plant does not have the mitten-shape leaves, you can always find several in a patch that do.  This identification feature is what really stuck out to me over the years.  By looking for it over and over again, I became much more familiar with poison ivy leaves, leading me to be able to identify the leaves by color (often a lighter green) and shape because I spent so much time looking for the “mittens”.

Twigs are a distinctive reddish to orangish-brown that differs from much of our other native vegetation.  Winter identification can be tricky in the absence of leaves, relying entirely on twigs and buds, but I’ve become quite proficient at picking out the orangish-brown twigs from other vegetation through repeated observation.  Practice does make perfect!

There are a number of plants that can very easily be confused for poison ivy.  Among them, seedlings of the box elder (Acer nugundo) tree bear a striking resemblance to small sprigs of poison ivy, causing me to look twice sometimes.  In seedling form, this plant is the easiest species to confuse with poison ivy.  The main difference between box elder and poison ivy is that box elder has an opposite leaf arrangement (meaning leaves are arranged on the stem directly across from each other) while poison ivy has an alternate leaf arrangement (leaves that do not connect to the stem across from each other).

Poison ivy is technically not an ivy or poisonous, but rather a member of the cashew family (Anacardiaceae) making it a close relative to sumac species native to Illinois. Consequently, our native fragrant sumac (Rhus aromatic) bears a striking resemblance.  However this plant is largely absent in central Illinois, confined to northern, western and southern portions of the state.  There are a number of herbaceous plants that have some kind of “3-leafed” arrangement but can easily be differentiated from poison ivy by their lack of a woody stem.

Our native blackberry, the common blackberry (Rhus allegheniensis), is only second to box elder in its similarity to poison ivy.  Common blackberry has thorns which are a key differentiation, although its alternate leaves are another clue.  These compound leaves do consist of three leaflets, but the leaf veins are more deeply incised into leaves than poison ivy and the leaf margin is jaggedly toothed.

If you have mysteriously developed the itchy rash associate with urushiol in the past, it may be worth practicing your field identification to better avoid poison ivy.  However, the sage advice to avoid anything that resembles “leaves of 3” may be easiest to adhere for the cautious outdoor goer.