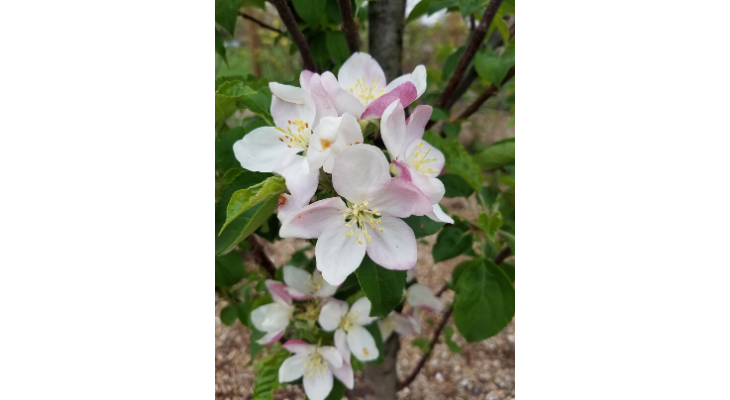 Winter injury is a common problem among fruit trees grown in our area and this year’s up and down spring temperatures resulted in damage to flower buds across central Illinois.  Cold weather in some years can bring damage to many ornamental tree species as well, impacting much anticipated spring blooms.  In fact, injury from cold weather is likely the most important limiting factor in plant species distribution around the globe, which is why most gardeners pay careful attention to cold hardiness maps.

If you paid a visit to the University of Illinois Arboretum this spring to view cherry blossoms in the Sen Cherry Tree Alle, near the Japan House, then you witnessed the effect of winter injury.  Sadly, the cherry blossoms were almost entirely absent this year.  I was only able to find a few isolated flowers that survived some of our late winter or early spring cold.  However, this is a bit of an odd year and the cherry blossoms should be back in full force next year.  It really is awe-inspiring display that I encourage everyone to visit next spring.  It’s certainly on my “must see” list each spring!

Many of the other ornamental species in our area, such as magnolias, crabapples, redbuds and dogwoods were not affected by cold weather, hosting their typical spring display.  Crabapples are probably in their peak display this week showing little sign of any impact from cold weather.  Redbuds and dogwoods also had an excellent display, possibly already peaking for the year as of this week.  Magnolia trees, which flower a bit earlier that the species mentioned above, did well this spring and have already peaked.  However, some magnolias in rural or more exposed areas did show signs of injury as flowers emerged.

Peach trees in our area were hit pretty hard this year, with some local growers reporting a complete loss.  I’ve observed similar effects in several backyard peach orchards as well, without a single flower present.  However, many apples trees suffered less damage, with many looking unaffected.  I have observed some with few or no flowers, so there was an impact, but it appears to be specific to certain varieties of apple or more exposed areas.

So, what is it that makes some species’ flower buds more or less susceptible to the cold? We can find some explanation in the timing of their flowering each spring.  Peach trees flower earlier than apples trees, indicating they come out of dormancy sooner than apples.  As trees break dormancy, their susceptibility to damage from cold temperatures increases.  So, the answer really lies in how and when individual tree species break dormancy each spring.

There is interesting data as to where the limits of susceptibility lies at various stages of spring development among fruit trees based on Extension Bulletins from Washington and Michigan State.  For example, swollen peach buds, or buds that have just broken dormancy and began development, can be damaged if temperatures dip below 23⁰F, with 90% killed by the time temperatures drop to 0⁰F.

The emerging flower buds on apples can endure lower temperatures, down to around 16⁰F before damage begins and 90% are killed around 2⁰F.  When combined with the fact that apples flower later in the season and break dormancy later, there is much less chance of 16⁰F weather later in the season, making apple crops much more dependable in our area.

Once flowers fully emerge and are considered in ‘full bloom’ cold susceptibility is a much closer range, although peach flowers able to handle slightly lower temps at this stage.  In apple trees, a fully developed flower can be damaged if temperatures reach a low of just 29⁰F (90% killed at 25⁰F), whereas peach flowers can endure a low of 27⁰F (90% killed at 24⁰F).

The weather this spring during March and April has been interesting.  In early March we had 4 days in row with lows in the single digits, whereas last March had none.  In April we only saw a few overnight lows approach freezing, whereas last April had a dozen.

If you are one of the unlucky plant owners that has experienced no flowers this spring, don’t lose heart.  Every spring is different and hopefully next spring will cooperate with appropriately timed temperatures for tree flower development.  To look at the positive side, trees that didn’t flower won’t have to support energy-intensive fruit development this year and can reallocate that energy to other life processes, such as disease resistance and shoot or root growth.