It's hard to beat a good beet 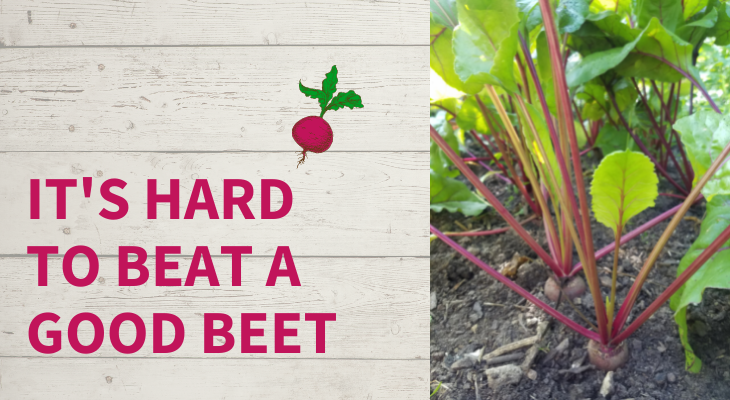 Mentioning the ripe beets coming out of the ground this time of year doesn't get much excitement out of my kids, but they are certainly a favorite of mine. I have such fond memories of fresh beets from my grandmother's garden. She served them pretty regularly as a side, fresh when possible, and canned the rest of the year, and I actually enjoyed them quite a bit when I was a kid. The hearty root crops are edible top to bottom, relatively easy to cultivate, and quite productive for the garden space they occupy.

Beets can be planted any time: One very common misconception about beets relates to their heat tolerance, with many folks believing they can only be grown in the cooler part of the growing season, such as early spring and late fall. However, beets can be planted throughout the growing season in Illinois. They are quite cold hardy though, which may be the root of this misconception.

Beets are one of the first things I plant in the garden each spring, starting them from seeds about a month before our last frost. Their hardy tops can take quite a bit of cold before showing signs of reduced vigor, giving them excellent resistance to a few late frosts.

When contemplating our fall gardens together a few seasons ago, I realized that I had fallen into this mistaken belief that beets are more of a cool-season crop when a fellow Extension Horticulture Educator suggested I plant more of them in my garden. Why didn't I think of that? The bed is already set up for beets, making succession planting quite easy.

Succession planting beets: This spring, my wife did a succession planting of beets, meaning she planted them in small sections over a few weeks so the mature plants would be spaced out over the same interval at harvest. That way, we had a batch ready for harvest each week as opposed to one large harvest if we had planted them all the same day.

Planting beet seeds: The beet "seed" is actually a cluster of seeds in a dried fruit, giving them an odd lumpy appearance, but making them easier to handle than the smaller seeds of many common garden crops. Beet seeds grow best when planted about ½ inch deep and one inch apart in rows that are spaced 12-18 inches apart. Since the seeds are clumped together, several seedlings will likely germinate from each fruit making more hand thinning a must later on in the growth cycle.

Thining: For me, thinning is always a difficult task. I have no problem pulling a weed, but pulling out a plant that I have sown just never feels right. However, thinning is always a necessity in the beet patch because beet plants are highly sensitive to competition. In addition, seed germination and emergence of seedlings often occurs over a relatively long period, creating a harvest of beets with somewhat varying age and sizes.

I typically thin beets to about 3-inch spacing a few weeks after they germinate. If you plan it right, the plants you thin out can be used as greens, which helps me justify pulling something that I planted. Still, it does become a bit of a balancing act between letting the beet plants get large enough to make a worthwhile harvest and not creating too much competition for the developing beets that will remain.

Weeding: I maintain the space between rows with shallow cultivation and hand-pulling of weeds. One of the most common mistakes, resulting in undersized beets at harvest, is allowing weed competition or competition from inadequate thinning. Beets have very shallow roots and are weak competitors, especially when they're young. I have found that it's critical to keep them free of competition in the first few weeks of growth or they will be set back significantly.

For most beet varieties, the optimal size for harvest is about 1 ½ inches in diameter with many reaching maturity in about 50 to 60 days. At about 1 inch of diameter, beets really tend to take off growing. In no time at all, your beets may be approaching 3 inches in diameter, which is about the largest size I care to harvest.

It's tempting to wait too long before harvest because the tops look so lush and healthy, but harvesting at optimal size will avoid the toughness beets develop as they approach the 3-inch size. Nothing turns a kid off more than tough, chewy beets at dinner time!

This article was originally published in the News Gazette on July 6, 2019.