Why do some trees retain leaves over winter? 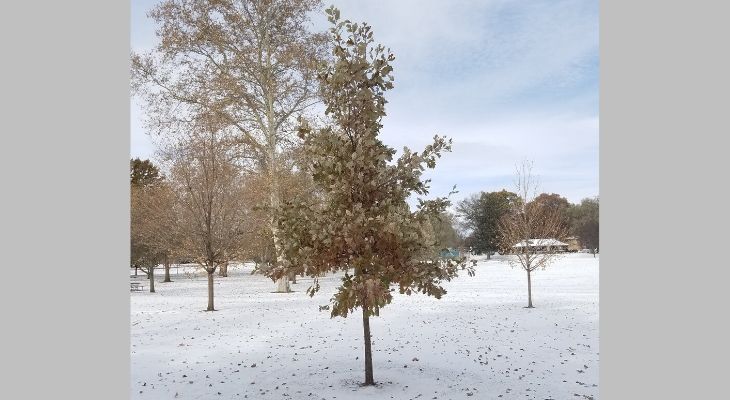 Not all trees shed their leaves in coordination during fall. You may have noticed that some trees are still holding their leaves this week, and many of those will likely hold them until spring.

Each winter, I get a number of questions on this topic as folks ponder the “not-so-deciduous” deciduous tree in their landscape. Are these trees considered deciduous or evergreen, or somewhere in the middle?

A discussion of evergreen vs. deciduous trees isn’t complete without first looking at where these two groups of plants flourish on Earth. What kind of pattern emerges if we look at where plants with the two opposing leaf-bearing strategies dominate ecosystems around the globe?

Areas on our plant that have seasonal droughts tend to favor deciduous foliage. By shedding leaves, deciduous plants are able to save energy during an otherwise-unproductive, drought-like time of year. The energy costs of retaining leaves in a drought are too high for the minimal returns from ongoing photosynthesis.

You may be scratching your head when you hear me talk about drought and coinciding leaf drop in the context of the seasons in Illinois. We typically think of mid- to late summer as the driest time of year, and that’s certainly not when all the leaves fall, unless your plant is already stressed enough that summer drought induces it. Most healthy deciduous plants are in full canopy at that time of year.

To plants, winter is actually a time of drought, although it may seem contrary. In this case, drought is caused by freezing temperatures, which tie up available water. So a plant that is able to drop leaves prior to winter can save the energy expense of retaining those structures during a time of low moisture availability. In addition, we know that photosynthesis is far less efficient at temperatures below about 50°F, further making a case for the high energy expense and relatively low gain associated with winter foliage.

Globally, ecosystems with poor or infertile soils tend to favor evergreen foliage. In these nutrient-limited ecosystems, the costs of nutrient acquisition are high, lending an advantage to plants with less complex and nutrient-demanding foliage. Evergreens have a lower annual nutrient demand since they don’t require the nutrient-intensive development of an entire canopy of leaves each year at spring leaf out.

As with most instances in nature, there are always exceptions to the rules, such as the boreal forest of North America. In this case, evergreen foliage dominates an ecosystem with a very long winter drought. Another example on our continent lies in nutrient-poor wetlands dominated by the deciduous-yet-needle-bearing larch (Larix) tree, also known as tamarack.

Deciduous trees holding leaves through winter is another one of those exceptions to some of the rules of the natural world. Botanists and ecologists have carefully studied this phenomenon, referring to it as “marcescence.” Many trees in our area exhibit marcescence, such as oak (Quercus) and beech (Fagus) species.

In both cases, young trees are more likely to display foliage marcescence than mature plants. American beech (Fagus grandifolia) is a prime example. During wintertime, you can see an entire forest understory of young beech trees full of leaves under a bare canopy of mature beech above. Oaks are similar, although some species, such as shingle oak (Quercus imbricaria) or pin oak (Quercus palustris), retain winter canopies in maturity as well as youth.

Several theories have emerged on the advantages of foliage marcescence. Winter foliage may deter browsing by herbivorous fauna by making it more difficult to consume stems, lending an advantage to a young understory tree that would otherwise be a prime target. As the tree gets taller, growing above the browsing height, there is less advantage, which may be why some trees lose their ability to retain winter leaves in maturity.

Another theory explores how marcescence can help deciduous trees compete with their evergreen counterparts in nutrient-poor environments. In these situations, where we know evergreens tend to dominate, it is advantageous for a deciduous tree to hold its leaves over winter and release them in spring. The leaves add some needed organic matter to soils in spring — think of it as compost.

During this time of high nutrient demand for spring leaf out, the tree self-fertilizes the soil beneath. There is also evidence that suggests photo degradation of leaves held over winter begins to break them down, or pre-composts them a bit.

Next spring, before you badmouth a pin oak for holding out for one more round of leaf raking, consider the unique and amazing feat of marcescence. That pin oak is just showing its savvy and trying to outcompete all the other deciduous trees that frivolously tossed out their leaves back in fall.