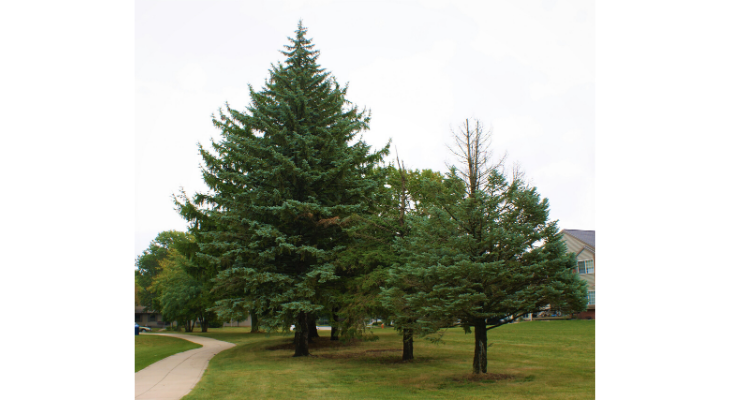 Spring is a great time for planting new trees in the landscape. There is ample rainfall to support your newly planted specimen and the warming temperatures and mild weather motivate many of us to get out in the garden and plant things. However, there are some commonly sold trees that fall onto my “do not plant” list. Many such plants make my list for their invasive habit, but some are on there for insect or disease issues or just generally poor performance as urban trees.

Colorado blue spruce (Picea pungens) tops my list of trees not to plant. As its name implies, this tree is native to the Rocky Mountains of Colorado and several surrounding western states.  It is adapted to the cool, dry climate of the Rockies, as well as the more sandy and very well-drained soils. When you plant this tree in Illinois, in our humid climate with poorly drained soils, it simply cannot thrive in these conditions.

I will be the first to argue that the beautiful, blue-green foliage of blue spruce is something to admire in any landscape. And many times these trees look wonderful at planting time and for a short period thereafter. However, unless this tree is planted in near-optimal conditions for Illinois, the stresses of our climate and soils add up over time to reduce plant health and vigor. As these trees mature, it is a sure bet they will suffer from a variety of common disease issues. For more information on spruce diseases, see this Plant Clinic Report.

While there are treatments available to slow the symptoms of these diseases, there really is not a cure, other than a change in climate and soils.  In my experience, treatments are costly and most often ineffective as a long-term solution, making this species a relatively short-lived landscape plant when compared to others.

Callery pear (Pyrus calleryana) is widely planted for its ornamental value, with more than 20 cultivars available at my last count. ‘Bradford’ is one of the most common cultivars leading to the more frequently known common name of “Bradford pear”.  The plant certainly has ornamental appeal, with nearly a month or more of flower display in the spring, beautiful dark green foliage, and a nice pyramidal habit.

Being a native of East Asia, Callery pear has relatively few disease or insect issues here in the US.  However, it is highly susceptible to storm damage.  Its compact and pyramidal habit can be attributed to a propensity for narrow branch angles and weak branch attachment.  In the words of a veteran arborist I worked with in the past, the ultimate fate for many of these trees is to “peel apart like a banana” in a wind or ice storm, leaving an irregular and unattractive canopy.

On a more serious note, this species has shown invasive character over the past few decades.  While most cultivars are sterile, cross-pollination between the many commonly planted varieties has created fertile fruits.  In open, sunny and unmowed areas the fruits, being spread by birds, pop up all over the place. From fence rows to highway right of ways, to edges of our yards, to local natural areas, you can see Callery pear on nearly any drive around central Illinois when it is in flower. It is one of the only species to have white, abundant flowers during its bloom time, making it stick out like a sore thumb.

Callery pear is yet another plant that I would argue has great ornamental value, such as the blue spruce. However, vulnerability to storm damage can limit its longevity in the landscape and when you combine that with the threat to natural areas it poses as an invasive species, it’s just a tree that we all need to stop planting.

In the past several decades it has been widely overplanted. I recall one college professor in the late 1990s predicting it may be the next monoculture, simply due to overplanting. That was before we really understood its invasive character. Combine invasiveness with continued overplanting and our future urban forest may well become a monoculture of sorts.

I always hate to pick on certain trees species, because as I have noted herein, there is beauty to found in all of them. However, in my career, I have seen these two species disappoint homeowners too many times to ever recommend planting either. My next blog, Recommended Replacements for Problem Trees, explores a more positive spin on tree planting by looking at some of my favorite and most recommended tree species.