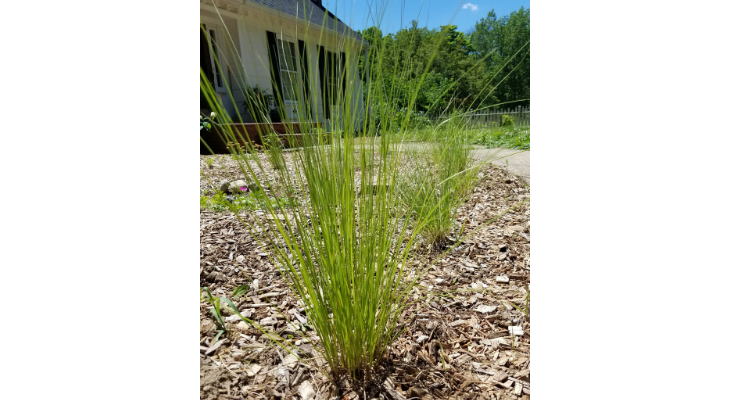 Nothing beats the light and airy look of tall, distinctive grasses in a landscape arrangement. The fluffy seedheads and slender, and attractive stems practically dance in the wind on breezy days, adding texture as well as a structural element to any landscape bed.

For many years, there was a trend toward more ornamental and non-native grasses. Recently, there has been a growing interest in incorporating our native prairie grasses, given their inherent adaptability to our climate and their exceptional ecological value.

Since Illinois is, in fact, the “Prairie State” it makes sense to design landscaping that might better represent the dominant historical plant cover in this region of our state.  However, many gardeners are not familiar with the characteristics of native grasses, making it sometimes tricky to place them appropriately.

Perhaps the biggest draw in adding grasses to landscaping is the tall and narrow vertical element they can add to any planting. Big bluestem, switchgrass and Indian grass are all lofty native grass options.

Big Bluestem (Andropogon gerardii) is one of my favorites for its wonderful height, sometimes reaching up to 8 feet including the seedheads. It’s known for attractive foliage and steams, with a nice seasonal variability in color and appearance of both.

In early spring, stems and leaves emerge with a darker blue-green color that lightens to a brighter green with red tinges replacing blue during the growing season.  Interesting and attractive seedheads develop later in the growing season for an additional bit of interest and height.  In fall, it’s known for the beautiful bronze to reddish leaf display that gently fades to tannish colored winter stems which typically remain upright to retain a vertical element throughout winter.

Big bluestem works well in the rear of a border planting or as a backdrop for other, shorter natives. It also works well in mass plantings or as a visual screen when planted in groups.

It can be maintained as somewhat of a specimen when mixed into native plantings, although it does tend to slowly spread by rhizomes over time. Spread can be limited by other competing prairie plants or by periodic removal of spreading shoots, which make some wonderful starts to share or add to new areas.

Switchgrass (Panicum virgatum) is another very tall native grass used for both its ornamental appeal and its tough adaptability to a wide range of soil conditions.  However, one issue with switchgrass is its innate ability to spread and take over, either from rhizomes or by seed.  For this reason, it’s probably better used in mass plantings or as a solid border to create visual screening. It works well in problem areas such as wet spots, areas with erosion, or locations with some partial shade.

While switchgrass can have a really nice fall color, I think its seedheads provide the most interest. As seedheads mature and expand late in the growing season, they created a cloud-like effect from their open and airy form across the top of plants.

Indian grass (Sorghastrum nutans) is another very tall native that offers a wonderful display of fall color each year which it typically carries into the colder months creating winter interest.  Seedheads tend to persist into winter as well, adding some additional texture and interest to the tall vertical stems.  During the growing season, its foliage has some of the blue-green coloring of bluestem but not quite as distinctive. This plant works well mixed into other native plant arrangements and tends to behave better than switchgrass, spreading much more slowly.

Little bluestem (Schizachyrium scoparium), as its name implies, is smaller in stature than its fellow native of similar naming.  However, this plant packs a ton of beauty into shorter stems and more fluffy seedheads.  Like big bluestem, foliage and stems emerge with a deep blue-green color that matures to lighter green with reddish accents at stem nodes. In late summer, flowers begin to emerge as beautiful purplish red structures that mature into fluffy tufts that add some additional texture.  Perhaps the plant's greatest beauty lies in the wonderful fall color of foliage and stems which turn a spectacular reddish-purple color.  Winter interest is provided by the remaining fall color that gradually fades to tan.

Little bluestem works well as a more vertical component that is not overly tall at only 2-4 feet by the season’s end. In my opinion, it is one of the most beautiful and colorful of our native grasses, and it behaves well as it is slow to spread retaining a clump-like habit. It works well in a great variety of garden uses, from mass plantings to small pollinator pockets but tends to thrive in dry, full sun locations.

Prairie dropseed (Sporobolus heterolepis) is another smaller native grass that works quite well in the landscape. While it does have interesting seed heads and nice fall color, I value this plant most for its fine textured foliage during the growing season and much smaller size at around 2 feet of height. This is one of my favorite plants to add along a sidewalk or at the front edge of a native garden. It creates a welcoming and inviting view with its fine-textured, hair-like light green foliage that wonderfully frames the planting.  I believe it’s a highly underused landscape plant that deserves more attention given its overall low maintenance requirements and well-behaved habit.

Northern sea-oats (Chasmanthium latifolium) is another smaller native grass that works well in a wide range of light and soil conditions. It has a neat and interesting seed structure, similar to oats, that matures into a beautiful purplish color by late summer. Seeds persist well into winter adding nice additional texture to its somewhat flatter and wider leaves.  This plant certainly spreads aggressively and must be placed accordingly in the landscape. However, it works really well in problem areas since it tolerates very wet soils and part sun.  Add this plant to borders or mass plantings that need to be filled in as it will aggressively outcompete weeds. It adds a wonderful texture, nearly year-round, to most landscapes with its more course leaves and interesting seed structures.