Early History of Pollinators and Plants 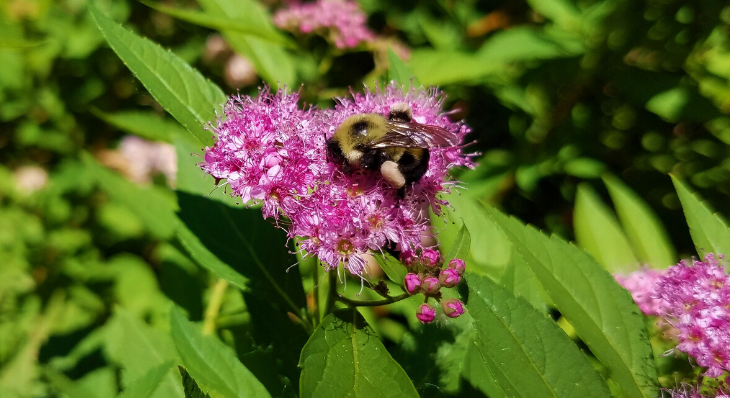 This past week was National Pollinator Week, a time set aside to celebrate the amazing and monumental task that pollinators perform each and every growing season.  Worldwide, animals pollinate about seventy-five percent of all plant species, and about ninety percent of all flowering plants.  And we all know that it takes a pollinated flower to produce so many of the fruits we depend on in our human diets, with animal pollination being responsible for about one of every three bites we take each day.

So, animal pollination is absolutely vital to life on this planet as we know it.  However, life on earth was not always like we see it today.  I have always been fascinated by the amazing story of how the intricate diversity of interdependent life on our planet developed over the geologic time scale, which is billions of years long.  The story of how plant and pollinator relationships coevolved over the millennia is one we often take for granted in the flower-filled world of today.  There was actually a time on earth when flowers didn’t exist, and neither did pollinators as we know them.

Recent research has updated the insect tree of life to indicate that insects evolved from ocean-dwelling crustaceans around 480 million years ago.  Around the same time, relatively speaking (just about 450 million years ago), plants first colonized land, coming out of the oceans) as well.

However, neither early plants nor insects were like what we know today.  For the first 300 million years, the plant kingdom was dominated by non-flowering plants, such as ferns, conifers, and cycads.  I think the ginko, an interesting deciduous conifer, is one of the most commonly referred to ancient plants that we see today.  However the ginko and its early relation, relied entirely on wind pollination to complete their life processes, insects were not part of the equation.

Early Insects were actually flight-less until about 400 million years ago.  However, they do get credit as the first life on earth to develop the ability to fly.  Over the ages this special adaptation of flight has served them well, granting them bragging rights for the most species-rich family tree on earth.

Somewhere around 150 million years ago, flowering plants (called angiosperms) abruptly emerged on the scene and there was an explosion of angiosperms over a relatively short period of time by evolutionary standards.  Insects can be credited as fueling this explosion of species.

Early flowering plants did produce pollen, but insect-attracting nectar we commonly associate with the plant and pollinator relationship today was not part of the equation yet.  It was all about the pollen.  The angiosperms produced abundant pollen, which is high in nutrition, and insects began to notice.

As insect species started using pollen for food, there was suddenly a perfect avenue for plant pollination to occur on a grand scale.  The feeding insects would spread pollen from plant to plant vastly improving the plant kingdom’s ability to disperse genetic information across the landscape.

Flowering plants that were pollinated by insects had a distinctive advantage over the archaic wind-pollinated species and their numbers exploded across the globe.  Competition between plants for attraction of pollinating insects lead to the development of many different size, shapes, colors and fragrances of flowers we see today.  Eventually this competition also lead to the addition of nectar as a sweet reward to insect visitors, which further diversified the flower structures.

Nowadays, there is somewhere around 300,000 to 500,000 species of flowering plants, making up about 9 out of 10 plants on earth.  The efficiency of insect pollination has proven to be a mainstay of our natural world and vastly influenced the evolution and proliferation of flowering plants around the planet.

Today, insects still stand as the most species-rich group of animals worldwide.  It is really shocking to me that a single species, Homo sapiens, has impacted global ecosystems so significantly that we are seeing sharp declines in pollinator populations.  If this trend continues we can expect worldwide crises as the plant world struggles to maintain vitality in both native plant populations and agricultural systems.

However, it’s not all doom and gloom and there are things you can do to be part of the solution.  Take some time during Pollinator Week to learn about and identify pollinators in your neighborhood so you can better understand how to support them.  Consider reducing your home pesticide use since pesticides are a major part of the problem.  Or, best of all, plant some pollinator habitat on your property to provide valuable resources for these invaluable members of our global ecosystem.

If you are interested in planting pollinator habitat, check out all the information on our Pollinator Pockets webpage.