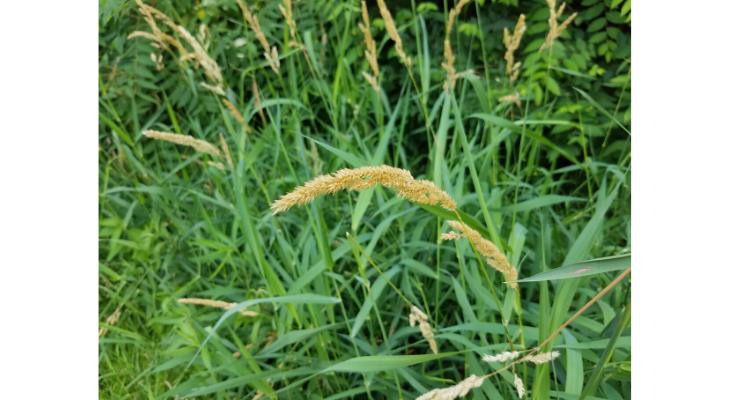 There are so many plants in nature that tend to reveal themselves during some kind of phenological event, such as flowering or fruit set, and then scream for attention.   For example, consider Joe-pye weed (Eutrochium purpureum), which one of my favorite native wildflowers, frequenting the partial shade of woodland openings and edges on drier sites.

Throughout the growing season it appears as a tall, green plant with slender leaves, seemingly unnoticed among a typical stand of native vegetation along a woodland edge. By late summer, it has reached considerable height, often taller than I am, and the tips of this plant explode into a profusion of airy purple flowers in one, or often more, panicles per stem.  You just cannot miss it and I often get questions about this mysteriously tall wildflower during the fall.

Other species from our collection of introduced nonnatives tend to draw attention when their phenology is a little out of sync with native ecosystems.  A great example of that happens each spring as the non-native, and highly invasive, bush honeysuckle (Lonicera spp.) leafs out.  It typically greens up several weeks earlier than any native species, making it really stick out.

The same can be said for late fall since this invasive is especially conspicuous when it becomes the only thing green in the understory once again.  All native forest plants lose their leaves or begin to enter dormancy well before honeysuckle, revealing an often abundant green shrub that can sometimes be depressing to observe across both urban and rural habitats.   This ability to leaf out early and retain leaves later into the season is one of the advantages it brings as a non-native.  While this trait is something that naturally occurred in Asian ecosystems, our native plant communities function differently.

Right now, there is an invasive species common in more open, sunny areas that I always notice as its distinctive seed heads mature. Reed canary grass (Phalaris arundiancea) is native to Eurasian and parts of North America but has become a problem across the Midwest and other areas.  As seed heads mature this time of year, I always start to notice its widespread abundance.  While this plant is rarely a garden or landscape weed, it can really take over natural areas, especially those associated with water resources.

There is no doubt on the invasiveness of Reed canary grass, but its native status is somewhat foggy.  The species is noted to occur across Europe, Asia and the US.  While some believe it to be native to parts of Illinois, research from the 1980’s suggests it may not be native south of Lake Superior.  Regardless, it has spread around the globe, now known to occur on all land masses except Antarctica and Greenland.

The term ecotype refers to a specific form of a species that occupies a set geographic region or habitat.  In the case of Reed canary grass, it is the Eurasian ecotype that is responsible for its invasive status.  While ecotypes are still technically classified as the same species, they differ somewhat in the observable characteristics, or traits expressed by their genes.  Environmental factors drive this difference in gene expression resulting in differing ecotypes from different regions.

Research has compared populations of Reed canary grass and determined that the introduced ecotype, from Eurasia, is what we see taking over and becoming invasive in Illinois.  To me this is such a stark example of the delicate balance in nature.  Our more native ecotype of Reed canary grass, from North American, can function with other plants in the natural world, while a slight difference in gene expression can create an ecosystem dominating monster.

Across the state, this plant is a major problem for land mangers focused on wetland or stream restoration.  I have seen it literally take over entire wetland restorations in the southern part of the state, shading out and outcompeting nearly all native plants. In central Illinois, it is also a problem, frequenting floodplains, forest edges and poorly-drained disturbed areas, such as road ditches.   In some cases, it does invade urban areas near the rural interface, popping up in wetter, unmowed areas.

On almost any drive this time of year, I can easily pick out golden, tufted seed heads bobbing above the green foliage of reed canary grass in roadside ditches, along field edges and around bridges. Due to its nondescript appearance for most of the year, this plant is often unrecognized until it is a problem.

While cultivation as a forage crop is likely to blame for most of this plants invasiveness on our content over the past century, some Eurasian genes from this plant were introduced as an ornamental, known as ribbon grass.  As gardeners, we need to be aware of the plants we add to the landscape and always do some homework before bringing a new species home.  There is no telling where the next invasive, or simply the genes to make it happen, may come from.