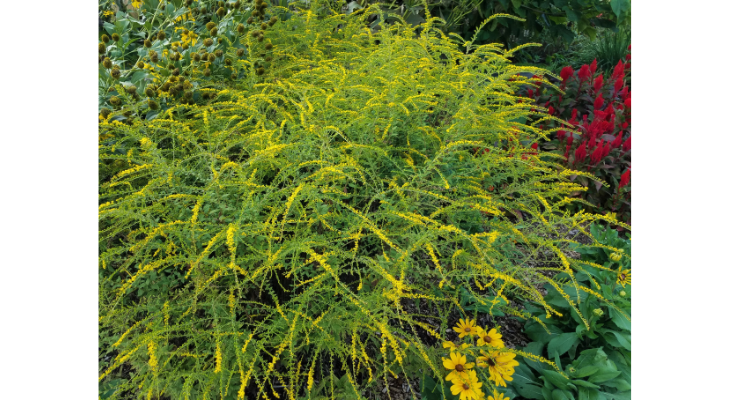 For many gardeners, an entire season of continuously blooming plants is a primary goal.  Not only do these fantastic flowers deliver ornate beauty throughout the year, but they are also greatly beneficial to pollinators by providing a continuous food source of pollen and nectar.  Since many plants have a limited flower display, sometimes only spanning a few weeks, it is often difficult to find the right arrangement of plants for an entire growing season of continuous blooms.

Right now, many of our landscape plants have already reached their peak and flowers have faded away.  However, plants in the genus Solidago and Oligoneuron, commonly referred to as goldenrods, are the stars of the show in fall, adorning roadsides, woodlands, prairies and home gardens alike with a wonderful display of autumn inflorescences.  Most goldenrod species bloom very late into the season, providing a canopy of yellow flowers that attract pollinators far and wide while adding a complementary color scheme to the changing leaves of fall.

Our native goldenrods have certainly received a bad rap in the past, causing many to overlook Solidago species in their landscape design.  Historically, the genus has been incorrectly pegged as being solely responsible for hay fever, whereas the blame actually falls on an array of pollen producing species with our native ragweeds (Ambrosia spp.) actually taking the brunt of responsibility.

In natural areas, some goldenrod species are known to dominate native plantings if left unchecked which can lower overall diversity.  Canada goldenrod (Solidago canadensis) is one such species, commonly forming dense colonies in that natural world.  It is adapted to full or partial sun and a wide range of soil conditions allowing it to out compete many other natives.

As a genus, goldenrod species span a wide range of conditions in nature with a goldenrod persisting in nearly any natural habitat in Illinois.  Due to this wide range of adaptability, goldenrod species are a great choice for more compacted or degraded soils and many have excellent drought tolerance as well.  While this makes them exceptional and well-adapted landscape plants, it can sometimes lead to a more aggressive habit that can dominate smaller plantings.  Plants in this genus grow from either think, clump-forming crowns or spreading rhizomes.  Species that spread by rhizomes, like Canada goldenrod, are the troublemakers making the clump-forming species a more reliable choice for landscaping.

Across the board, Solidago species are of huge value to wildlife.  While some of this value comes from the late season floral resources they provide to pollinating insects, many specie are favorites of leaf feeding insects, stem borers, leaf beetles, and caterpillars of various moth species.  They support many species of beneficial, or predatory insects that are active in control of other insect pest species.  In addition, seeds and foliage provide food for some birds and mammals.

When selecting a goldenrod for the home garden, clump-forming species are commonly recommended for planting in combinations with other landscape plants. While it is generally accepted that the native, straight-species are best for wildlife, a number of cultivars and hybrids have been produced over the years and sometimes these plants are more suited to a landscape setting, providing the best of both worlds.

In the 1990’s, the Chicago Botanic Garden’s Plant Evaluation Program conducted a trail of both native, straight-species and common cultivars or hybrids available at the time. Although any newer cultivars are not covered, this trial provides the best comparison of both native goldenrods and cultivars or hybrids that I have found.  Among the top winners in this report are the native stiff goldenrod (Oligoneuron rigidum) and a nativar of wrinkle-leaved goldenrod (Solidago rugosa), called ‘Fireworks’.

If you are interested in learning more about goldenrod species well-suited to Midwest gardens, the full Plant Evaluation Report (see Issue #15) is available on the Chicago Botanic Garden website.