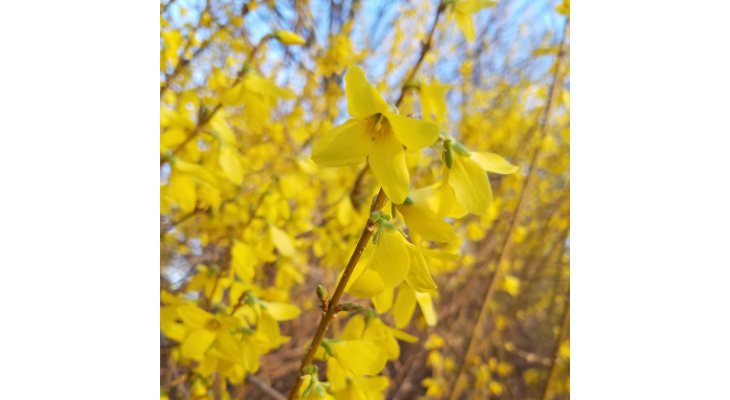 Every spring, the awakening plant world has those hard-to-miss harbingers which alert us that winter is over and help to welcome spring.  In native plant communities, I think of spring ephemeral wildflowers as the primary signal and watch intently for their blooms each year.  However, in the built environment, there are other, nonnative plants that signal spring with their unmistakable displays.  While tulips and daffodils are probably a few of the most recognized ornamental plants in the early spring landscape, there is one shrub that has always been the beacon of the growing season for me.

Forsythia is the common name, which is also the genus name, for a group of non-native shrubs that have become one of the most popular landscape plants of early spring. They boast cascades of bright yellow flowers that are hard to miss this time of year.  Since flowers emerge prior to full leaf out, their mostly bare stems become a floral sensation almost overnight as warming spring temperatures spur their flower display.

Perhaps the most popular of the forsythias, or at least the most prevalent in garden centers, is the hybrid border forsythia (Forsythia x intermedia).  Border forsythia is a cross between weeping forsythia (F. suspense) and greenstem forsythia (F. viridissima), with the designation of “x intermedia” being a nod to characteristics of both parents that are nicely expressed in this hybrid plant.  It combines the habit of both parent plants to create a beautifully arching branch character that hosts a more yellow and denser flower display than either of the straight species.

While a forsythia shrub in full bloom is truly an unmistakably lovely sight this time of year, it may be the only season of ornamental value from this plant, which is probably the biggest downside to planting a forsythia.  Its summer foliage is quite unremarkable and fades to a yellowish-green in fall. Some individual plants do develop a purplish leaf color in fall, but its a short lived display.  So, this shrub is commonly considered a “one-season wonder” that fades into the landscaping around until the following spring’s explosion of flowers.

Since border forsythia is only hardy to Zone 5, we are near its northern extend.  As a result, colder winter temperatures (typically below -5 to -10⁰F) can lead to loss of flower buds and poor spring blooms. I have already observed some plants this year with winter damage in exposed rural locations, indicated by sparse flowers on what should be spiky cascades of bright yellow flowers.

These days, quite a few cold hardy varieties have been developed, so it’s worth doing a little homework prior to planting a new forsythia shrub in a more exposed location.  A few of the more common cold hardy varieties I’ve seen around include ‘Meadowlark’ and ‘Northern Sun’, which are both hardy down to around -30⁰F, but there are certainly quite a few others.

Forsythia works nicely in a landscape setting as a hedge or mass planting and requires full sun to ensure a good flowering display.  It puts on incredibly vigorous growth once established, which may require regular pruning to maintain size.  Newer varieties are less spreading, but this plant is known to form large colonies via root suckers if unchecked.

On the positive side, forsythia does quite well in most urban settings and is tolerant of wide range of soils.  This versatility, combined with its vigorous growth allows for some flexibility in pruning practices.  While the best recommendation is to remove 1/3 of the oldest stems at ground level every few years, it can also be cut entire to ground in a renewal pruning, which is nice alternative for a plant that has become out of control.

Since this is a spring flowering shrub, plan your pruning application for immediacy after flowering to allow enough time this year for flower buds to develop over the rest of the growing season.  It’s those buds that will create torrents of flowers next spring.

While forsythia is a non-native and may not support much of our native fauna, it does provide a much needed early floral resource for pollinators.  When you combine that benefit with the ornamental beauty it creates for humans, it is a plant worth considering if you have the space to accommodate its size.