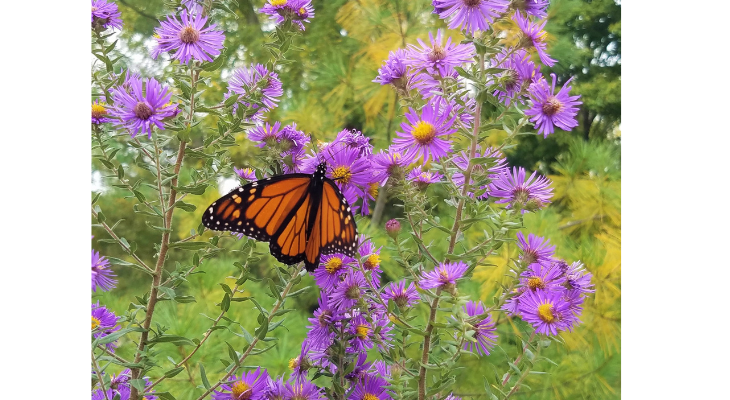 Fall flowers are some of the best of the year since they take a whole season of waiting to finally display their splendor.  Beyond their beauty, they provide a valuable food source for pollinators late in the growing, which can be especially important for migrating species such as the monarch butterfly.

Asters are the stars of fall in the natural world.  They prettify prairies, woodland edges, roadsides and a variety of locations across the landscape with cascades of daisy-like blossoms.  The species in their family (Asteraceae) are diverse and numerous, with over 250 plants referred to as “asters” around the globe.

Starting in the 1990’s botanists were able to take a closer look at asters with aid of DNA testing. New and interesting genetic differences emerged that resulted in the reclassification of many species, changing botanical names and removing the 180 species native to North America from the genus Aster.

This was a hard shift for many since Aster had been the genus name associated with so many species for so long.  The majority of north American asters were moved to the genus Symphyotrichum, which certainly doesn’t roll off the tongue like Aster.  Although research decades ago provided the bases for new classification, it has been very slow to catch on among plant nurseries and others, resulting in some confusion over which plants are and are not “asters” and complicating matters for gardeners.

While this kind of confusion is typical with many plant name reclassifications, it seems like the changes among asters have been one of the slowest accepted and most talked about that I have experienced in my botanical career.  It wasn’t until 2015 that the Royal Horticulture Society officially adopted the new names and I still see old botanical names in use today.

However, there is some consistency in naming if we simply stick to the common name, aster.  In Greek aster means star, which is emblematic of the aster flower structure.  Aster flowers consist of a bright yellow to orange center packed with tiny disk flowers, sometimes numbering in the hundreds.  This cluster of disk flowers is surrounded by ray flowers that each have one long petal-like structure, called a ligule, that extends outward creating a neatly star-shaped flower.  These ligules range in color from white to pink, blue or purple and act as petals do on many other flowers, attracting pollinators and focusing attention on the food-rich disk flowers in the center of the structure.

Flowering asters are always a wonderful harbinger of fall color to come, with a number of tiny-flowered wild species, such as heath aster (Symphyotrichum ericoides), bursting with autumnal inflorescences in field edges, along roadways and other open areas in the landscape.  At a time in the growing season when so many other species are done blooming, the asters provide an invaluable floral resource for pollinators.

In cultivation, asters deliver a needed boost in aesthetics this time of year, with many producing a constantly massive flower display.  New England Aster (S. novae-angliae) is a garden favorite of mine, with its towering stems of purple to pink flowers throughout fall.  It prefers full sun and well drained, fertile soils.  Height can be an issue with this plant since it can easily reach eye-level and tends to flop over without support.  Pinching back stems a few times or shearing during the season works well to reduce height and promote bushiness, although dense foliage can create powdery mildew issues.  I recommend dividing this perennial every other year to reinvigorate plants and keep stem density down, providing better air circulation.

Another favorite of mine that is somewhat shorter in stature is aromatic aster (S. oblongifolium). It has similar purple flowers that bloom slightly later than New England aster in my garden.  It does well in a wider range of soils and prefers full sun.  With its lower height (2-3 ft) and aggressive, spreading habit, it works wonderfully as a taller groundcover that easily occupies available space, filling in nicely around other taller, established plants.

For locations with some shade, I really enjoy smooth blue aster (S. leave).  It typically reaches heights somewhere in between the two aforementioned asters with light purple flowers that occur in late September into October.

Asters are certainly not care-free perennials if picture perfect appearance is your goal.  All of them benefit from regular division and tend to spread by seed.  Spread can be limited by clipping flowerheads in fall time, although their opportunistic habitat can really help outcompete weeds in gardens with enough space.  For me, the reward of late season blooms has always outweighed any other factors and the pollinators in my garden show their buzzing approval as they engulf these plants during autumn.