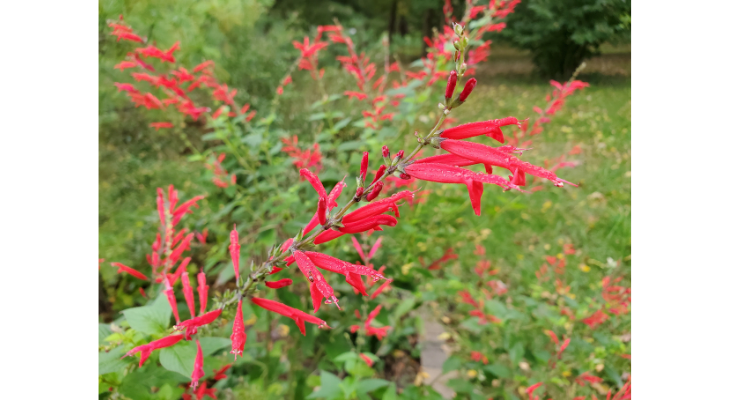 Earlier this week, I was visiting a neighbor and noticed an eye-catching plant in rare form for this time of year.  It was filled with abundant red blooms that almost glowed against the backdrop of green leaves behind it.  Whorls of the tiny flowers filled the spiky stalks that jutted out in all directions, creating a display that no human or pollinator could miss.

After asking, I learned this plant was pineapple sage (Salvia elegans), named for its aromatic foliage with a scent very close to pineapple when crushed.   For me, it was an “ah-ha” moment.  I have always read about pineapple sage as a pollinator plant, which caused me to take note when I ran across it at a Missouri Botanical Garden a few years ago.

That was in early summer, when foliage abounds, but flowers are absent.  I spent a few minutes examining the fine textured leaves and experiencing their pineapple scent but didn’t think much of it at the time.  So, it was neat for me to see this plant in bloom and connect the wonderful, aromatic leaves with its awesome inflorescences to realize its true value in the landscape.

Pineapple sage is not native, hailing from the much warmer climates of Mexico and Guatemala.  As such, it is only hardy to Zone 8, making it an annual plant here in central Illinois (Zone 5b).  In its native range it commonly occurs as clumps or large groups in sunny woodland edges across the Sierra Madre mountains at elevations above 6,000 feet.  In the landscape, it prefers a similar setting with full sun and well-drained soils.

The plants I observed this week were about 3 feet tall and were planted in early summer.  So, this fast-growing annual can reach significant heights in a single growing season, with a similar spread.  Its fine-textured foliage and more open habit give it a lighter and less dense appearance than other landscape plants that support a similar number of blooms.

Pineapple sage works well as large and quick growing annual intermixed in perennial beds or herb gardens.  It can be added as a specimen plant or in small groups to amplify its effect.  A number of cultivars exist that may have more attractive or interesting foliage, which adds to summer interest.  Its light green foliage, with some cultivars trending toward almost highlighter yellow leaves, can work as nice contrast when adjacent to plants with darker foliage.

At Missouri Botanical Garden, I observed this plant in various containers, coupled with other species that provide summer blooms for interest as pineapple sage builds toward its fall display.  So, it works well in containers although it does require consistent moisture to remain healthy and provide a full flower display later in the year.

The explosion of late season, nectar-filled blooms this plant provides are attractive to bees, butterflies and hummingbirds.  In its native range, it is noted as a hummingbird favorite, with the typical tubular-shaped flower that hummingbirds tend to prefer.  Since it blooms so late in the season, it can help support migrating hummingbirds and provide a late season floral resource to other pollinators that are prepping for winter here in Illinois.

Beyond pollinator use, both foliage and flowers of this plant are edible to humans. The flowers can be colorful garnish or nice addition to fresh salads.  Leaves can be added to salads as well or used to make interesting hot or iced teas.

As you are contemplating next spring’s garden plans, consider adding this interesting annual for its unparalleled fall flowering display.  While it adds great pollinator value and can also be a food source for humans, it also provides a neat addition with an interesting pineapple scent.