How to identify common holiday evergreens 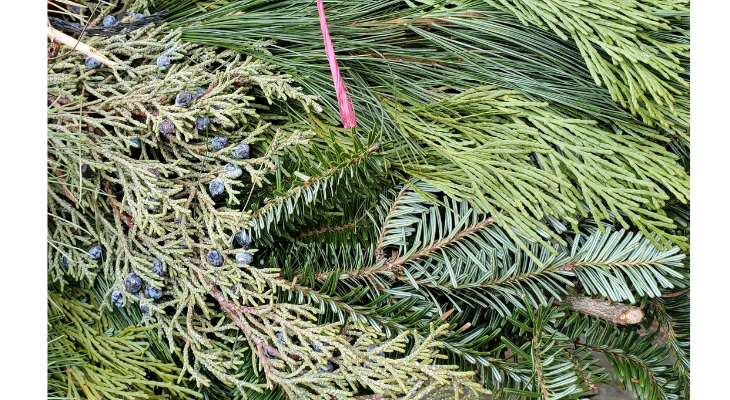 Evergreen foliage has long been a traditional holiday decoration since it encapsulates the green of the growing season well beyond the first frosts.  The holiday season is an excellent time to practice your evergreen tree identification on the many non-natives that are so plentiful at retail locations.

With some simple study, you can pretty easily identify the primary species that are in circulation this time of year and impress family and friends throughout the holiday season with your new identification skills.  In addition, these new skills can also help identify evergreens in the landscape, since many evergreen trees and shrubs, both native and non-native, are popular landscape plants as well.

Conifers are the primary type of evergreen we see during the holidays. They are characterized by their fruits, which are cones, and either spray-like or needle-like leaves.  Although most don’t think of needles as leaves, they actually occurred earlier on the evolutionary scale then broadleaves and, in many ways, are considered a more efficient form of foliage.

Pine trees, or members of the genus Pinus, are perhaps the most common conifer we see in the landscape.  While their needles come in a variety of shapes and sizes, pines can always be characterized by having needles in bundles.  This means that the needles occur in small bundles, or groups, along the twig.  The number of needles per bundle is one of the best identification features for pines.

Some of the most typical pines we see as holiday décor are scotch pine (P. sylvestris) and white pine (P. strobus), with the latter being one of our few Illinois-native conifers.  White pine is easily identified because it is one of very few pine species with five needles per bundle and they are fairly long, around 3 to 5 inches.

Scotch pine is more commonly sold as a Christmas tree than white pine.  It is one of many pine species with 2 needles per bundle.  Compared to white pine’s relatively soft, bendable needles it has shorter (3 inch or less) needles that are stiffer.  While I think of white pine needles as the true color green, scotch pine is more of a cloudy, gray-green in comparison.

Spruce (Picea spp.) are another category of conifer, and although they are less commonly used as holiday decoration, they are quite common in the landscape. Their needles are typically shorter and stouter than pine trees and are arranged radially, meaning they point outward in all directions around the twig.  Spruce needles occur individually on the twigs, as opposed to being in bundles like pines.  They are almost always sharp to the touch, which anyone who has ever decorated a blue spruce (P. pungens) can attest too.  So, short needles that are sharp to the touch is perhaps the best single identification feature for spruce.  The primary species used for the holidays are blue spruce, which has a very blue-colored needle and Norway spruce (P. abies) which has a dark green needle.

Frasier fir (Abies fraseri) is the most popular species for Christmas trees, wreaths and other greenery.  Balsam fir (A. balsamea) and grand fir (A. grandis) are also quite common holiday species.  Many firs work well as ornamentation for close human contact since their needles are not sharp, occur individually on the stem and are usually relatively short and stout.

Frasier fir can be identified by its smaller needles, typically less than one inch, which have a turpentine-like scent.  While the flat needle arrangement on the stem can be distinguished, some needles seem to come out of the top of the stem or sharply curve upward.  Balsam fir also has shorter needles (1-2 inches), but a more pleasant scent than Frasier fir.  Whereas grand fir has longer needles (1-3”) which seem to alternate between longer and shorter needles along stem.  In addition, the needles have a very pleasant, citrus-like scent, similar to oranges.

For additional photography showing differences in needles and other information, Oregon State University has a really great database of plants with much more detail on both balsam fir and grand fir, among others.

One of the ways confers are classified is by their foliage, including needle-like leaves (as we talked about above) and spray-like leaves.  So, what are spray-like leaves of evergreens?  You’ve probably seen this type of leaf arrangement on the many juniper species (Juniperus spp.) that are planted in landscape.  Additionally, the one native conifer to central Illinois is eastern red cedar (Juniperus virginiana), which is in the.  Many non-native junipers are planted for their ornamental attributes and come in a variety of shapes and sizes.  One incredibly interested aspect of these plants is their fruit structure, which is classified as a cone but greatly resembles a berry.  Cuttings from junipers are included in wreaths and other arrangements for their interesting, spray-like vegetation, as well as their dark colored berries.

Spray-like vegetation is a form of evergreen leaf structure that is arranged in overlapping sprays that together give twigs a feathery appearance.  Its is often considered needle-like, but typically lacks points with narrow, but more rounded tips to each leaf.

When I picture this type of leaf structure, I think of arborvitae (Thuja spp.).  With its many cultivars that are widely planted its one of the most common evergreens in the landscape, from backyards to commercial plantings in parking lots and entryways, the many shapes and sizes of arborvitae are just all over the place.  Foliage is commonly used in wreaths and other evergreen displays for winter.

Eastern red cedar and many other junipers actually have two types of spray-like vegetation.  On the same plant, you can often find older foliage (3yrs and older) that is scale-shaped and younger foliage (1-3 yrs old) that is considered awl-shaped.  The awl-shaped leaves of eastern red cedar, named after the small pointed tool used to puncture holes in materials like leather, are very needle like, with sharp points typically arranged in opposite orientation.  Whereas the scale-shaped leaves are less pointy and more overlapping, typically arranged alternately along the twig.  For are more detailed discussion of awl-shaped vs scale-shaped vegetation, visit the IllinoisWildflowers.info page to read more.

There are quite a few plants which have evergreen vegetation that is not at all needle-like, but occurs in broad, flat leaves our many native deciduous trees, although these leaves remain for several years on the plant.  The most popular I have seen used in holiday vegetation are the hollies (Ilex spp.) and boxwoods (Buxus spp.).  I thin boxwoods are perhaps the most popular broad-leafed evergreen in used in landscaping and many of us easily recognize these plants outdoors, but its often deceiving when this interesting foliage is included in holiday greenery and many of us fail to recognize this super common plant in an uncommon setting.

With its contrasting red berries and glossy, evergreen foliage, holly is one of the quintessential plants for winter decoration.  Its leaves are shiny and pointy, and when combined with the bright red of plentiful berries, it cannot be mistaken since few other leave shaped have similar points and red berries.

Hollies are one of many plants that are dioecious, meaning male and female flowers occurs on separate plants, and have taught many a gardener this lesson in the sexes. They are notorious for not yielding berries in the absence of the other sex and leaving gardeners wondering why their holly has no red berries.  The best bet is to plant several hollies to be sure you have male and female plants, or some cultivars have been developed to reliably produce male and female plants, such as ‘blue boy’ and ‘blue girl’ (Ilex x meserveae ‘Blue Boy’ or ‘Blue Girl’), and alleviate this issue.