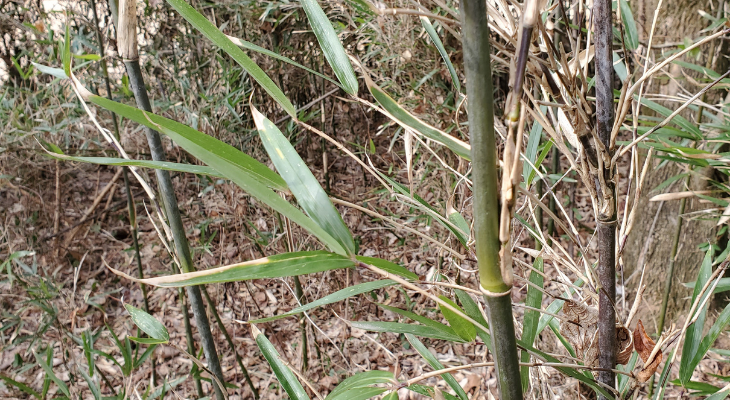 On a recent trip to southern Illinois I couldn’t help but notice an incredibly unique native plant whose evergreen foliage is reminiscent of something from the tropics, making it seem so out of place in the winter landscape of Illinois.

Giant cane (Arundinaria gigantea) is Illinois’ only native species of bamboo and one of only three native to our continent. This woody grass has the characteristic look of bamboo, with tall and spindly green stems that are neatly segmented and hollow. Its long, thin leaves occur in tufts near the top of each cane, while lower stems become bare with age to reveal bamboo-looking shoots.

Since it typically occurs in dense stands, called canebrakes, it is quite noticeable in winter along streambanks or in woodland edges or openings. These canebrakes once covered extensive acres of river bottom in southern Illinois and early land survey records noted large, unbroken stands of giant cane with towering stems and dense foliage.

As agricultural production expanded, the areas cane occupied became important and fertile farmland, pushing giant cane out to its current existence in small, usually isolated patches in the edge of farm fields, along streambanks, or in swampy areas.

What was once a dominant plant in many bottomland areas is now reduced to less than 2% of its native range in Illinois.

Like other bamboo species, giant cane rarely flowers and when it does, the above-ground stems die back to the ground. Many believe this reproductive strategy is meant to open up light for the germinating seeds as they contact soil. While the mature plant’s root system may resprout, new growth from seeds adds to the canebrake or floats off with floodwaters to potentially colonize new areas.

Since cane is wind-pollinated and currently exists as small isolated populations, when it does flower there is rarely enough genetic diversity in pollen floating around to produce viable seeds.  As a result, giant cane primarily spreads by rhizomes, or roots that send up shoots. So, many of the cane patches we see today may be one single plant that has gradually spread over time to form a colony with very little or no genetic diversity. Without the ability to spread viable seeds, cane populations have an incredibly difficult time colonizing new areas.

The unique look of a dense, evergreen cane patch may appeal to humans for its tropical wonder, but it also provides a valued and unique habitat structure that supports rare species in Illinois.  Perhaps the most noted native fauna cane-breaks support is the state-endangered bird species, the Swainson’s warbler (Limnothlypis swainsonii) which prefers canebrakes for nesting habitat.

Researchers at Southern Illinois University in Carbondale have studied cane extensively as a conservation species to understand its merits for bank stabilization and other beneficial functions in riparian areas. In 2008, they established the first giant cane nursery in the U.S. to study the best methods of propagation in the hopes that cane may become more available for conservation practices and habitat restoration.

Although giant cane has only been recorded as far north as Greene County, it is cold hardy to Zone 5, which includes all of central Illinois. While this plant has not proven to have the ability to extend its natural range to our area, its cold hardiness suggests it could flourish if planted. In southern Illinois, it seems to grow quite well among plantings I’ve observed in both natural and landscape-type locations, readily becoming established from transplanted rhizomes.

Given its unique look, perhaps giant cane can be our next rain garden plant or a new species for establishing more sharply vertical habitat in native gardens?  Hopefully, the work of SIU and others can pave the way for this plant to reach commercial markets and make its appearance as one of the most interesting native woody plants we’ve yet seen.