The American Robin: Living up to its superhero image

After an exceptionally mild winter, I noted my first robin sighting about three weeks ago, a sure sign of spring. Sipping on my coffee, I watched as wave after wave of robins hopped through the yard, stopping to cock their head, as if listening for worms in the soil below. Scratching and digging through my leaf mulch, these red-breasted thrushes, found a protein-rich feast. 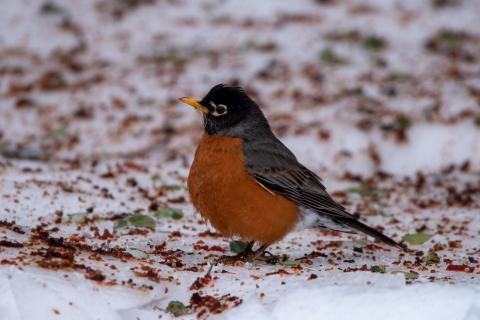 American robins are migratory birds, according to Douglas Stotz with the Chicago Field Museum. In fact, 15 years ago most American robins were flying south for the winter. However, with increasingly warmer winters, robins are now year-round Illinois residents. Cornell's Journey North map reveals that robins were sighted in Southern Canada on January 24.

The American Robin suffers from an unfortunate Latin/scientific name coincidence - Turdus migratorius. Thumbing through various literature, ornithologists with an impeccably matter-of-fact tone describe the origin of Turdus as Latin for "thrush."

The First to Nest

American robins are one of the first songbirds to nest in the spring. The male's song is what we often hear on these crisp mornings warding off competing males while drawing in mates. The female builds her nest and lays beautiful blue eggs, while the male watches over and provides food during the 14-day incubation and two-week fledgling stage.

American robin chicks are born completely featherless, blind and totally dependent on their mother and father to regulate their body temperature, food, and protection. Only about 25% of chicks survive the summer. Nest predators slither, walk, and fly and range from snakes to raccoons to jays and many others. Housecats have become a problematic non-native predator of songbirds.

With such a high mortality rate, it is remarkable how the American Robin has succeeded in establishing across the entire North American continent. Robins can rear two to three broods per season and adults live an average lifespan of two years.

Being so large in comparison to other songbirds, the American Robin can produce one of the loudest songs. Robins sing to attract mates but also to alert others to trouble.

When my son joined me at the breakfast table, I pointed out the birds were robins and his eye lit up. "Like Robin from the movie?" Referencing his growing Batman knowledge. "Yes," I explain, "they could be considered protectors in the bird world."

Biologists have found that robin songs are so pronounced, that other species of birds, squirrels, and deer respond to their alarm call. In a way, robins act as a scout. Foraging on the open ground leaves these birds are open to many predators, so they must be vigilant. Often when trouble arrives, robins are the first to sound the alarm signaling to other wildlife to be on the lookout and thwarting a stalking housecat or sneaky snake.

The American Robin, our backyard superhero.