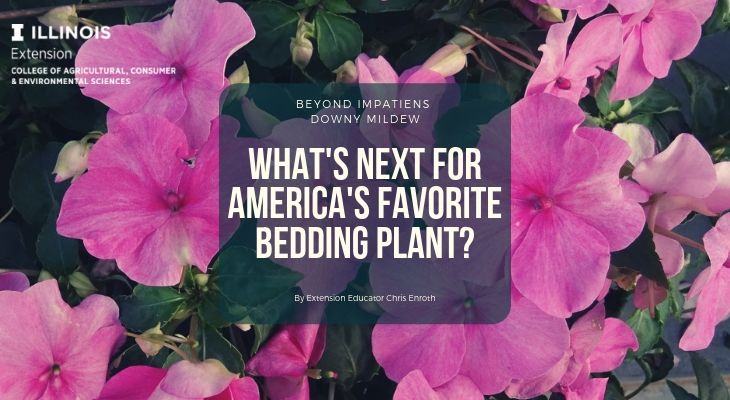 Impatiens (Impatiens walleriana) is one plant I had written off years ago. In my mind, I thought I had seen the last of one of the most popular bedding plants in the nursery trade. Impatiens were fast disappearing from garden centers because of an incredibly infectious disease – impatiens downy mildew.

Impatiens is a powerhouse annual and was the go-to bedding plant for those gardening in the shade. In fact even today, it is still readily available in many garden centers. So why the doom and gloom on America's favorite bedding plant?

I first wrote about impatiens downy mildew in 2013 as it had been appearing sporadically throughout the Midwest for several years and had been confirmed in most of the Eastern US including Texas and Oregon. The disease is fatal to infected impatiens and the pathogen remains in the soil.

Impatiens downy mildew may be a disease you've never seen before, or like me, be all too familiar with when it popped up in my garden. If this disease is news to you, here are some tips for spotting downy mildew on your impatiens.

Officially known to plant pathologists as Plasmopara obducens, Impatiens Downy Mildew is a fungus-like pathogen that causes symptoms starting with yellowish or pale-green foliage, progressing to downward curled leaves, leaf distortion, and white to light-gray fuzz on leaf undersides. As the plant battles this disease it replaces infected leaves with new ones, however, these new leaves are small and discolored. The flower buds fail and defoliation can occur. In other words, this disease will leave behind bare stems and no blooms. The perfect environment for impatiens downy mildew is rainy days coupled with cool night temperatures. But once infected, researchers have seen this disease progress in hot, dry weather.

Many garden centers pulled this popular plant from their shelves or spray it with a rigorous schedule of fungicides to keep the disease at bay. But who wants to spend money on plants doomed to die? Other shade-tolerant species have now taken the place of impatiens, like the New Guinea impatiens that are resistant to the disease. There is an unseen benefit here somewhere. Yay plant diversity!

Now after more than five years, there is a ray of hope for us shade-bound, impatiens lovers. Two companies, Syngenta and PanAmerican Seeds will be launching the first impatiens with downy mildew resistance to the US market. Syngenta will release their new line of impatiens called Imara XDR this year, 2019. The XDR stands for "extra disease resistance". To get the XDR title, breeders have to get their claims verified by independent third-party experts, So Syngenta turned to plant pathologists at Cornell, who confirmed the claims.

PanAmerican Seeds will be releasing their new "highly resistant" line of Beacon Impatiens to select nurseries in 2019, with a full US market launch in 2020.

So what does this mean for us shade gardeners? We might be able to plant impatiens without fear of them all dying! If you are picky about blooms, both Imara XDR and Beacon Impatiens will be available in a wide range of colors. Nevertheless, now the challenge will be finding a spot for impatiens among my new staple shade annuals of begonia, caladium, and coleus.