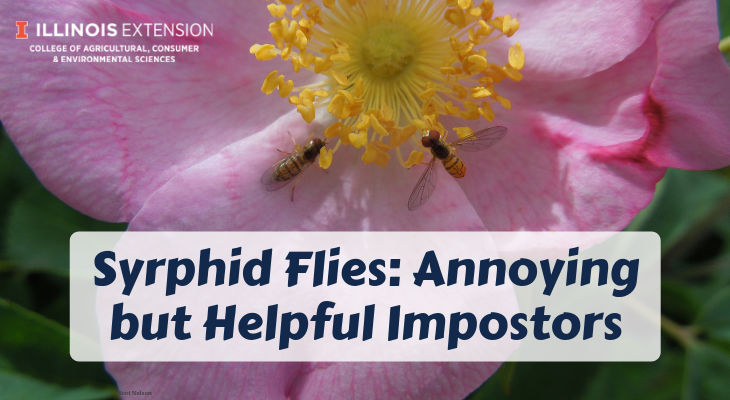 Is it a bee? Is it a wasp? No, it’s a syrphid fly, and they are rather abundant this year. We’ve had several questions come into our offices about them. While at a cookout with my family this weekend, we got to experience dozens of them flying around and occasionally landing on us.

Syrphid flies (aka hover flies, flower flies, corn flies, helicopter flies, and sweat bees, among other names) range in size from ¼ to ¾ of an inch long and resemble bees and wasps with yellow, orange and black markings. Despite their appearance, they are not bees or wasps but flies in the family Syrphidae (thus the name syrphid flies). Like bees and wasps, the adults are often seen around flowers. There are several different ways you can tell them apart from one another:

Despite their annoying habit of swarming and landing on us, presumably to get moisture and salt from our sweat, most syrphid flies are quite beneficial (there are a few species, such as the Narcissus bulb fly, that are considered pests). The adults are important pollinators and are often seen visiting flowers in gardens. Some popular flowers with these insects include Queen Anne’s lace, sweet alyssum, coriander, dill, and other small-flowered herbs.

Where syrphid flies really shine in the garden is when it comes to pest control. Females will lay their eggs on plants near or among aphid colonies. After about three days, the eggs will hatch. The maggots (gross I know, but that’s what fly larvae are called) are legless with a tapered body and range in color from creamy-white to green or brown. They will crawl around in search of food; once they find something, they will grab it with their hooked mouthparts. The larvae will feed on aphids and other small soft-bodied insects such as mealy bugs, scale, thrips, and eggs. A single larva can eat 20 to 30 aphids a day and up to 400 during its development! So, if you ever see an aphid infestation in your garden, make sure you check to see if there are any syrphid fly larvae around before getting too worried. The larvae will feed for seven to ten days before they pupate. After around ten days as a pupa, the adults will emerge to continue the cycle again.

Between the adults pollinating and the larvae feeding on pest insects, the occasional annoyance from syrphid flies is definitely worth it.

Good Growing Tip of the Week: Syrphid files have sponge-like mouthparts that they use to feed on nectar, pollen, and if they land on humans, sweat. Despite what many people think, they don’t bite or sting. If you do get stung by a small insect feeding on your sweat, it is most likely a ‘true’ sweat bee.