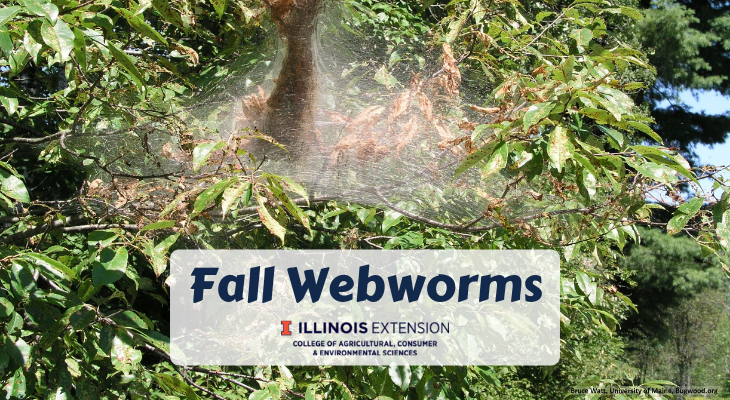 There are many ways we mark the end of summer. Some refer to the beginning of school or the closing of the pool, while others view Labor Day as the ‘unofficial end of summer’. Another way, if you’re more entomologically inclined, is the appearance of fall webworm.

Fall webworm (Hyphantria cunea) ‘nests’ often start becoming noticeable in our landscapes during the late summer and early fall. The caterpillars will spin their communal webs on the ends of branches on which they are feeding. They have been found on over 400 different species of trees and shrubs. In Illinois, they are most commonly found on crabapple, walnut, hickory, pecan, redbud, sweetgum, maple, and oak.

The adults are bright white moths (in the southern part of its range they may have dark spots on their wings) that will begin to emerge in the summer (there can be two generations per year in southern and parts of central Illinois). The females will lay egg masses that contain several hundred eggs on the undersides of leaves. About seven days later the larvae (caterpillars) will hatch.

The webbing created by fall webworm can act as a beacon, drawing your attention to the damage they cause. In most cases, only a branch here or there will be attacked. Occasionally though, entire branches, or trees in extreme cases, can be stripped of leaves if populations get high enough. As alarming as it may be, it’s unlikely to do any long-term damage to the tree. The damage they cause happens later in the year and the leaves they are feeding on have done most of the work that they need to for the year. They also only feed on the leaves, they leave the buds of next year’s leaves alone (the trees should leaf out just fine next year). Add this all up and management of fall webworm isn’t usually warranted.

The primary problem with fall webworm is aesthetics. If you just can’t stand the sight of them there are several things you can do. One common way of managing them is to prune the affected branches out of trees. Keep in mind that the webbing is only temporary, any pruning you do will be permanent and can potentially hurt the aesthetics of the plant. The water-resistant webbing fall webworms create makes it difficult to control them with pesticides. If pesticides are used make sure to use enough pressure to penetrate the webbing, or tear it open before spraying. Keep in mind any chemical used may have an impact on any predators and parasitoids that may attack fall webworm. At least 50 species of parasitoids and 36 species of predators have been found to attack them, which is why we don’t have nearly as many issues with them, compared to Europe and Asia where they have been accidentally introduced (we’re not the only ones who have invasive species, we send pest insects to other countries too).

Instead of worrying about their presence, think of fall webworms as a sign of what’s to come, cooler temperatures, changing leaf colors, and pumpkin spice everywhere.