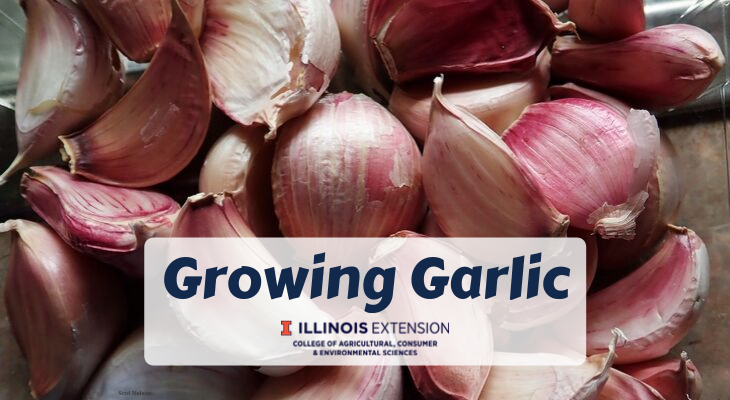 Want to get a head start on planting your vegetable garden for next year? Then garlic is the plant for you! Garlic (Allium sativum) has been grown for thousands of years as both food and for medicinal purposes. It has a long growing season which may seem daunting. Fortunately, it is relatively easy to grow and typically has relatively few pest problems.

In order to properly produce garlic requires a cold period, therefore it should be planted six to eight weeks before the ground is expected to freeze. For central Illinois, this is usually late September to early October. This will give the cloves time to produce roots and to begin growing shoots before the ground freezes, as well as providing them with their chilling requirement during the winter. Come spring, they will resume their growth.

Garlic can be planted in the spring; however, if this is done the cloves should be stored in a refrigerator for at least eight weeks prior to planting. This will ensure they have been properly chilled. While you can get good yields from spring-planted garlic they tend to not yield as reliably as fall-planted garlic.

There are two main types of garlic: softneck and hardneck. Hardneck garlic produces a hard flower stalk called a scape, which is where the name hardneck comes from. It is easy to peel and is more winter hardy, but it has a shorter storage life. On the other hand softneck garlic stores well, which is why we typically find it in grocery stores, but it does not peel as easily. Softneck garlic also rarely produces a flower stalk, thus the softneck name. A third type of “garlic”, elephant garlic, is not a true garlic but actually a leek. Elephant garlic has a milder flavor than true garlic.

Garlic should be planted in well-drained soil in full sun. Garlic does best in soils with an abundance of organic matter. Therefore, make sure to amend soils with compost or well-rotted organic matter. In addition to adding organic matter, apply two to three pounds of 10-10-10 fertilizer per 100 square feet before planting.

It is best to get your garlic from garden centers or catalogs. Garlic sold in grocery stores is usually treated to prevent it from sprouting, so it’s not a good choice for planting. Some hardneck varieties that do well in Illinois are Spanish Roja, Carpathian, Georgian Crystal, Music, Metechi, and Persian Star. Softneck varieties Inchelium Red and Idaho Silverskin do well in Illinois.

Once you have your garlic bulbs they should be broken apart into individual cloves, but don’t do it until right before planting. Choose the largest cloves for planting to get the best yields. Cloves that are diseased or soft should be discarded and small or damaged can be used in the kitchen. Once the soil has been prepared and you have selected you cloves, plant them one to two inches deep and four to five inches apart with 15 to 18 inches between rows. Make sure to plant the cloves with the pointed side facing up.

Garlic is related to onions and is susceptible to the same pests and diseases such as thrips, onion maggots, and bulb rots. Because of this try to avoid planting garlic in areas where you have recently grown onions. Garlic is also a poor competitor, making weed control important if you want to get good yields. A four to six-inch layer of weed-free straw or other organic mulch (such as all of those leaves you’re going to have to start raking soon, just make sure to shred them first) can be added to help control weeds as well as help moderate soil temperatures.

During the growing season try to keep the soil evenly moist, if the soil gets too dry it can result in small, irregularly shaped bulbs (they need about an inch of water a week). If you’re growing a hardneck variety remove the scapes (flower stalk) as they appear, this will allow the plant to commit its energy to developing the bulb instead of the flower (if you leave them yield can be reduced by 25 percent). Garlic should be harvested when half of the leaves have turned yellow (usually around late June/early July). Bulbs should be cured in a cool, dry, well-ventilated area for several weeks. Once your garlic is cured, the stems and roots can be cut off and bulbs cleaned by removing the outer most skin, just make sure not to expose the cloves. Finally, they should be stored in a cool, dry, dark place.

Good Growing Fact of the Week: Garlic has been used as a medicinal plant and food source for over 7000 years. Ancient Egyptians provided it to the laborers who built the great pyramids with the belief that it would increase their strength and stamina, as well as protect them from disease.