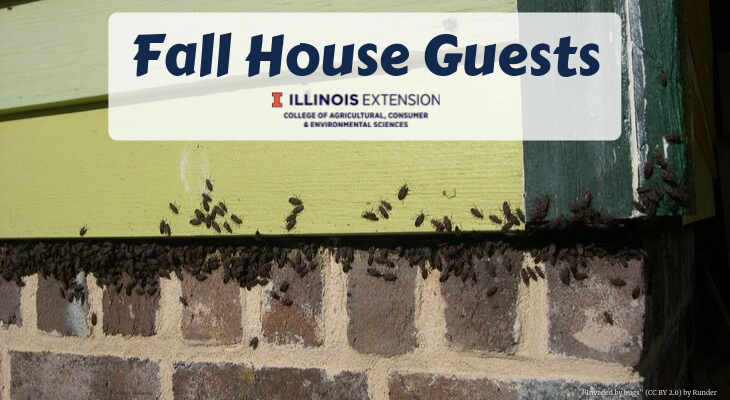 As the weather gets colder and the days get shorter uninvited house guests often start showing up in our homes. A variety of insects and other creepy crawlies will seek out shelter in our homes to pass the winter. Some of our most frequent guests are box elder bugs, multicolored Asian lady beetles and brown marmorated stink bugs.

Boxelder bugs (Boisea trivittata) are commonly found trying to enter houses, especially if you have a boxelder tree nearby. These insects are about ½” long and black with orange or red markings. During the spring and summer, the adults will feed on leaves and seeds of boxelder trees (and occasionally maple and ash trees). When temperatures begin to cool in the fall, they will start to seek out warmer areas. They are most often attracted to buildings with large southern or western exposures because they are warmer than the surrounding area. As they aggregate on buildings, they will find cracks and other spaces to squeeze into. They will occasionally make their way indoors often end up in walls and attics until warm weather returns.

Multicolored Asian lady beetles (Harmonia axyridis) are also commonly found attempting to make their way into homes. These lady beetles were first introduced to the U.S. from Asia as early as 1916 to help control pests but did not become established until 1988 in New Orleans. Since then, they have spread throughout the country. The beetles will vary in color from yellow to reddish-orange and have anywhere from 0 to 19 spots. They can often be distinguished from other lady beetles by the presence of an 'M’ pattern near their head (although it may not always be present/visible). In many places in their native range, they will overwinter on tall cliffs. Since we lack these in most parts of Illinois, the next best thing is your house (or other buildings).

Another home invader that we are starting to see more and more of in Illinois is the brown marmorated stink bug (Halyomorpha halys). This stink bug is native to Asia and was first discovered in the U.S. in the late 1990s in Pennsylvania. Since then, it has quickly spread throughout the United States. Brown marmorated stink bug (BMSB) will also congregate on buildings looking for somewhere to overwinter. Unlike boxelder bugs and multicolored Asian lady beetle, these insects are more than a nuisance. They will feed on a wide variety of tree fruits, vegetables, crops, and ornamentals and can cause a significant amount of damage. BMSB has the typical ‘shield’ looking body of stink bugs. As their name implies, they are marmorated (mottled) brown color. There are a few characteristics that can be used to differentiate them from our native stink bugs: the antennae have white bands on them, they have smooth ‘shoulders,’ and they have a black and white triangular pattern on their abdomens. There are several different types of insects that are commonly confused with BMSB. If you are unsure of what you have, contact your local extension office.

For all of these insects (and other fall guests like crickets, millipedes, and spiders to name a few) the best management strategy is to keep them out of your home in the first place (exclusion). Make sure windows and doors fit tight and make sure window screens don’t have any holes in them. Seal any openings, cracks, and crevices around the foundation, pipes, wires, and chimneys. Finally, make sure siding, eaves, and soffits are in good condition. Insecticides can be applied to the perimeter of buildings, but are often ineffective. Since these insects are rather mobile, it can be challenging to get adequate control of them. Once they enter your home, they can be vacuumed up and placed in soapy water and disposed of. Using insecticides to control these insects indoors is generally not recommended.

Good Growing Tip of the Week: Some of our insect guests like stink bugs and multicolored Asian lady beetles have unpleasant smelling defensive chemicals. When vacuuming them up, it may be a good idea to use a cheap vacuum instead of the one you'll regularly be using throughout your house.