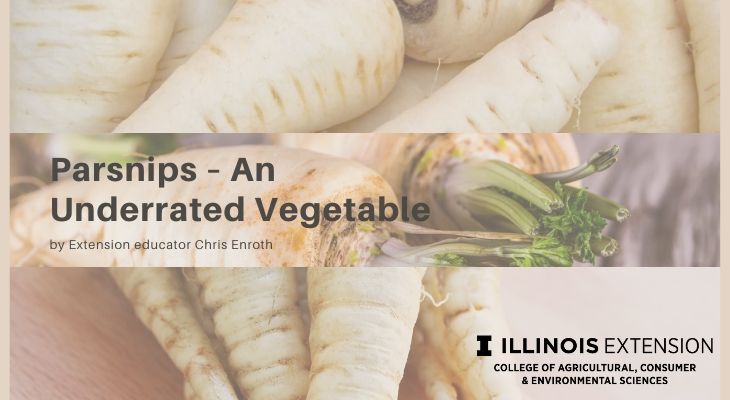 I love parsnips. But have you ever bought parsnips at a grocery store? Let me share my experience. At the checkout lane, the cashier always has a befuddled look when parsnips are up for scanning. A look that I know all too well.

“Oh, those are parsnips,” I tell the cashier.

Suddenly the horticulture educator within me comes out. “Actually, they are closely related. They are both in the carrot family. They even taste similar, but parsnips have more of a sweet, nutty flavor.” I continue on explaining how I prefer to substitute celery with parsnips and it is a completely underrated vegetable.

At some point I feel the eyes of everyone waiting behind, as I have broken grocery store rule number one - ‘don’t make checkout last longer than it should’. The cashier is being nice, but they are paid to be nice and probably don’t care that parsnips are better than celery. Which they obviously are, but I grab my groceries and leave the store.

In addition to being a great vegetable, parsnips are also incredibly easy to grow. It is basically like growing carrots, where the hardest part is soil preparation and seed germination.

Parsnips are typically grown from seed and can be considered a very long season crop. Part of this is due to the fact parsnips take a long time to germinate (over three weeks!) and if the soil is crusted over, the seedlings will not emerge.

You will need to sow parsnip seed in early spring when soil temperatures are ideally above 50 degrees. I have used low tunnels to warm the soil and get a jumpstart on the growing season. In the past, I’ve sowed parsnips as early as mid-March. Parsnips can germinate in cool soils, as low as 35 degrees Fahrenheit. However, your germination rate will not be very good.

My parsnips grow in ten-inch raised beds to give them deep soil for developing a large root. If you grow in a flat garden, you need deep well-drained soils. This may require amending the soil based on your specific garden conditions.

Like carrots, parsnips need even moisture to germinate. This means, light frequent irrigation. Not so much water that the ground is saturated, but enough to keep the top layer of soil moist that contains the seeds.

My garden has a drip irrigation system on a timer that takes a lot of guesswork out of watering and is something I credit for getting good germination of my parsnips. Keep the parsnips watered and fertilize if a soil test reveals you have a nutrient deficiency. There is not much insect pest pressure, and the plants form a dense enough canopy that weeds have been a rare issue in my garden.

Harvest once the roots reach one-inch in diameter. I prefer to wait until after the first fall frost as this will make the roots sweeter. Like carrots, you can mulch over the parsnips and hold them through the winter in the ground, digging them up when you need them on days above freezing. Harvest the last of the parsnips before any new growth resumes in the spring as they will turn fibrous and bitter. Kind of like celery!

So, if you are enjoying delicious, savory Thanksgiving stuffing only to bite into a stringy piece of celery, consider parsnips as a substitute. I know, I will be reaching for parsnips over celery when making my post-Thanksgiving turkey soup. Time to go to the grocery store.

Good Growing Tip of the Week: Parsnips are related to the wild parsnip, a plant that can cause blister-like sores when a person gets the sap on their skin on a sunny day. The cultivated parsnip does not cause such severe reactions, but some people do still get rashes when working with the plants. Wear long-sleeves and gloves to avoid skin irritation when working with parsnips.