What's the Difference Between Sweet Potatoes and Yams? 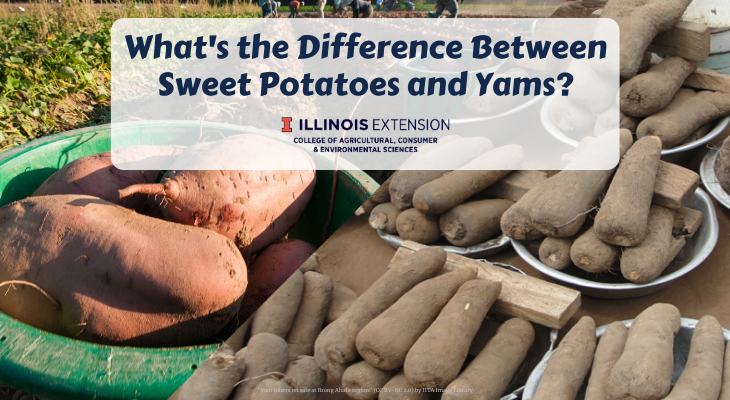 Pass the sweet potatoes. Or is it pass the yams? We often use these names interchangeably, but in reality, they are two very different plants. So, what is the difference between sweet potatoes and yams?

True yams are monocots (like grasses and lilies) in the family Dioscoreaceae that are native to Africa and Asia. Sweet potatoes are dicots that are native to Central and South America and are part of the morning glory family (Convolvulaceae). Additionally, sweet potatoes are not related to potatoes (also called Irish or white potatoes) either, which belong to the nightshade family (Solanaceae) along with tomatoes, peppers, and eggplants.

Yams belong to the genus Dioscorea, which contains over 600 species of plants, most of which are tropical. Several different species of yams are cultivated, with the most commonly grown being white yam (Dioscorea rotundata) from Africa and water yam (Dioscorea alata) from Asia. A majority of yam production takes place in Africa (95% of global production), with Nigeria being the largest producer. Yams that are available in the United States are typically grown in Caribbean countries.

Yams grow as a vine and produce an underground tuber, which vaguely resembles sweet potatoes, that are long and cylindrical. Yams can range in size from the size of a potato to extremely large, up to five feet long and weighing over 100 pounds! Their flesh can be white to bright yellow to purple or pink, and the tuber is covered in a tough, scaly skin that is difficult to remove. They are often boiled and mashed as well as fried, roasted, or baked (like baked potatoes). Yams are starchier and drier when compared to the sweet potato varieties most commonly grown in the United States.

Sweet potatoes (Ipomoea batatas) produce storage roots that have smooth thin skin that can range in color from white to yellow, red, purple, or brown. These roots are short and blocky and have tapered ends. The flesh also ranges in color from white to yellow, orange, or orange-red. Sweet potato varieties are classified as either ‘firm’ or ‘soft’. When cooked, ‘firm’ sweet potatoes remain firm and are dry and crumbly (like a ‘regular’ potato), while ‘soft’ varieties become soft, moist, and sweet. ‘Soft’ types typically have dark orange skin and orange flesh. In the United States, these are the sweet potatoes we usually refer to as yams (they are also the most commonly grown sweet potatoes).

Today the USDA requires that when the term ‘yam’ is used to describe sweet potatoes, it must also be labeled as a ‘sweet potato.’ Unless you specifically search for yams, which can often be found at ethnic markets, you are probably eating sweet potatoes.

Armed with this knowledge, you now have a great conversation starter for the Thanksgiving table. Or, if your family is anything like mine, they’ll roll their eyes and grumble here they go again.

Good Growing Fact of the Week: In addition to requiring warm moist conditions for growth, edible yams also have a very long time to harvest. Plants often require 6-12 months of growth before their tubers can be harvested. Sweet potatoes, on the other hand, typically take around 100 days to harvest.