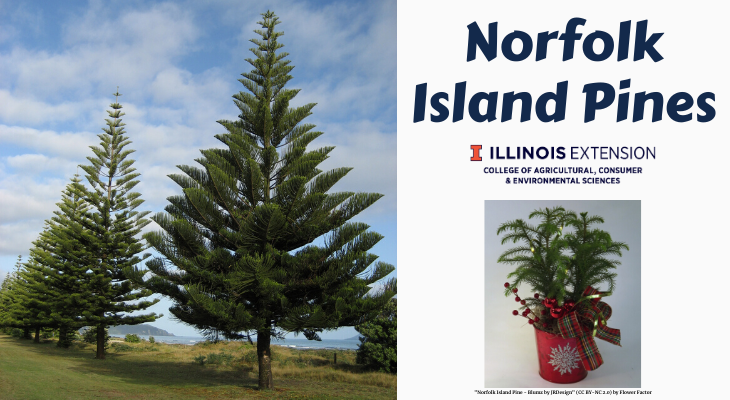 Norfolk Island pines (Araucaria heterophylla) are plants we commonly find during the holiday season. They are widely marketed as living Christmas trees and are commonly adorned with bells and bows. If you purchased or received one, they could become beautiful houseplants for many years if properly cared for.

Despite their name, these evergreens are not actually pine trees. Instead, they belong to an ancient plant family named Araucariaceae (pines are in the Pinaceae). This family of plants was widespread during the Jurassic and Cretaceous periods, but are now confined to the Southern Hemisphere. Norfolk Island pines are native to Norfolk Island (it is featured on their flag) as well as nearby Nepean and Phillip Islands, which are located in the South Pacific between Australia, New Zealand, and New Caledonia.

In their native habitat, these evergreens can reach heights of up to 200 feet and have trunks up to 10 feet in diameter. They have horizontal branches (or close to it) that are whorled around the trunk in tiers. The trees have a conical shape and straight vertical trunks, which is impressive considering they are exposed to constant onshore winds.

Norfolk Island was discovered by Europeans in 1774 by James Cook, who believed Norfolk Island pines could be used to produce ship masts due to their long, straight trunks (it turns out they aren’t suitable for ship masts). Since that time, Norfolk Island pines have been transported around the world. They can be found growing in coastal areas in many countries (that have suitable environments), including the United States (Southern California and Southern Florida). In addition to being used as an ornamental plant, their wood is used for construction, woodturning, and crafts.

As with most houseplants, in order to get the most out of your Norfolk Island pine, you want to mimic their native environment as closely as possible. They typically grow in coastal areas, which are humid. Our homes tend to be dry, especially in winter, so it is important to take steps to increase the humidity around your plant. One way to do this is to fill a saucer with rocks and water then place the plant on top of it. This will create a microclimate of high humidity around it. If you have quite a few houseplants, consider using a humidifier to increase humidity. One of the most common problems with Norfolk Island pines is needle drop. This often occurs because the plants have been exposed to dry air or dry soil.

When it comes to water, these plants like moist conditions, but not wet feet. Allow the soil to dry out some between waterings and make sure your pot has drainage holes. If the plant is overwatered, it can lead to the loss of branches. Like other houseplants, water until water begins to flow out of the pot’s drainage holes. After about 15 minutes, discard the water that has drained from the pot. A diluted liquid house plant fertilizer can be used every two weeks while they are growing (usually March – September). They often don’t grow much during the winter, so there is no need to fertilize then.

They can also be moved outdoors once the temperatures begin to warm up (lows consistently in the 50s and the chance of frost has passed). Make sure to slowly transition them to the outdoors so they aren't sunburned. It is generally recommended to place them in bright shade and to make sure they are protected from the afternoon sun. Once temperatures start to drop into the 50s in the fall, it will be time to bring them indoors again.

As houseplants Norfolk Island pines are slow-growing, often growing three to six inches per year, so don’t be alarmed if your tree isn’t growing quickly. They typically will reach heights of six to eight feet when grown as a houseplant (they can get larger though). With proper care, your tree will last for years to come.

Good Growing tip of the week: Norfolk Island pines are often painted green during the holidays. If this has been done to your plant, try to remove as much of the paint as possible because the paint will affect the plant's ability to absorb sunlight.