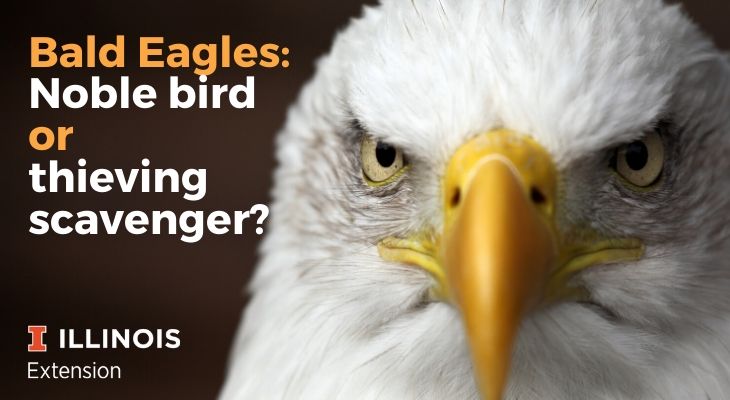 As a kid, I remember the bald eagle being rare and revered. At school and on TV we learned the bald eagle was an endangered species. The resounding theme when I was young was that bald eagles were noble hunters, flying skyward and swooping down to grasp fish from an icy lake. In movies bald eagles had a piercing call, it sounded like a mighty high-pitched screech. I’m not sure how to convey this sound through text, but hopefully, you remember the sound clip that played every time you saw an eagle onscreen in the 70s, 80s, and 90s.

Turns out the bald eagle call most of us know from TV and movies was a red-tailed hawk call. You see, an actual bald eagle call sounds more like a whinny seagull. Not quite the majestic sound you want to hear when John Wayne rides into town.

The other surprise many people have is when they’re driving around the countryside and see roadkill being fed on by bald eagles. Scavenging dead animals? That’s what vultures do, not America’s national bird! As it turns out, bald eagles are happy to scavenge morsels of roadkill or garbage. Even on the river in winter, you’ll find them trailing after tugboats that chop up hapless fish with their metal propellers. You can also witness bald eagles fight over animal remains. Plus, many bald eagles will let others do the hunting and then harass the victor to the point that they abandon their kill and the bald eagle steals the meal. Is this truly the animal we picked to symbolize the spirit of America?

This was a point of contention during our nation’s founding. If Benjamin Franklin were able to sway others, our national emblem would have been the wild turkey. Franklin wrote of the bald eagle, “He is a Bird of bad moral Character. He does not get his Living honestly. … Besides he is a rank Coward: The little King Bird not bigger than a Sparrow attacks him boldly and drives him out of the District.”

If you are doubting our nation’s symbol, keep in mind bald eagles are huge, powerful birds of prey (raptors) and skilled hunters despite their inclination to scavenge and steal. Bald eagles will even hunt in groups with one bird flushing out prey towards the other hunters. And you must admit, seeing a bald eagle on a perch is a foreboding sight.

Bald eagle identification is fairly easy to teach audiences. An adult bald eagle’s white head and dark brown body stands out in the line-up of North American birds. Juvenile bald eagles have mostly dark brown heads and tails with mottled brown and white wings. It takes an immature bird about five years to develop the telltale plumage of an adult bald eagle.

The bald eagle has quite a story to tell, and I’ve only scratched the surface on what there is to know about the bird that sits as our national emblem. The story of near extinction to recovery is a success story. However, there is more to be told and even more uncertainty for the future of all Illinois wildlife.

These facts and stories are fascinating and are just a sample of what you can learn during our Master Naturalist Volunteer training. Master Naturalists volunteer to help steward our remaining wild areas and teach others how to make our communities more sustainable. We will be hosting a Master Naturalist training in the West-Central Illinois region during the summer of 2020. If you are interested in learning more about our natural world and sharing that with others, get in touch with me at the McDonough County Extension office or contact your local Illinois Extension office.

Good Growing Tip of the Week: Winter is the best time to see bald eagles, as they tend to congregate at rivers, streams, and lakes. As we move to February, they will migrate toward their breeding grounds and begin to construct their massive nests that can be seen from quite a distance.