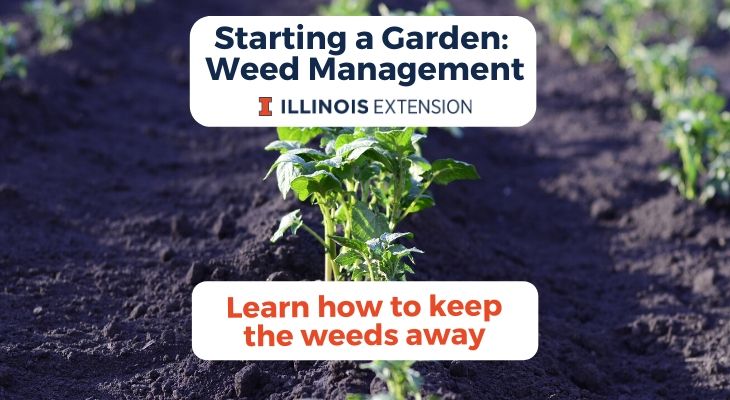 Weeds are everywhere. If we could add one more thing to life’s certainties I would argue “weeds” should be added to the list. Our soil is full of seeds, lying in a dormant state waiting for the right conditions to germinate. Each time we disturb our soils through tilling, planting, raking, even pulling existing weeds, we provide the opportunity for new weed seeds to sprout in those locations. So if you are just starting a garden, or are a green thumb backyard grower – what can you do to help manage the weeds that will undoubtedly pop up in your tomatoes and salad greens? Let’s examine some methods for weed management that could be used in your garden.

As was stated above, the soil is choked full of weed seeds (known as the “weed seed bank”). These seeds may be generations old, or blow in every year on the wind, or deposited by a bird or other animal. As an example, when a neighbor’s brush pile fire got out of control and burned my parent's cow pasture, this created quite a disturbance. Following that fire, we saw native plant species that likely haven’t grown in that pasture for decades.

Garden preparation for many involves tilling or killing off existing plants. These are major disturbances that can lead to weed woes throughout the growing season. Here are methods for garden preparation that can minimize weed problems:

Some gardeners need to break up heavy clay soils or add in a type of amendment (always amend based on a soil test) to improve their soil health. Often they will turn to running a tiller over the future garden bed and then raking the bed smooth. Some may even water the bare soil to encourage weed growth. After watering, they will cover the bed with a silage tarp or some type of black plastic that impedes light and water from reaching the soil. They newly disturbed and watered weed seeds will germinate, only to be met with an impermeable black membrane. The weed seedlings will starve from lack of photosynthesis and die. This creates a “stale seedbed". After three to four weeks the tarp is removed. Any straggler weed seedlings can be hit with shallow cultivation, flame weeder, or pulled by hand. Because of the time it takes for the tarp to remain on the soil, this takes some forethought and planning to make sure your tomatoes aren’t delayed in planting until July. Also, once the tarp is removed this technique relies on limiting soil disturbance afterward. Light cultivation with a long-handled hoe or hand-weeding minimizes soil disturbance. The last thing you want to do is till again before planting your crops.

Avoid the tiller altogether by laying down some type of suffocating mulch. My preferred mulch is arborist wood chips. These are often plentiful and depending on where you live, many tree-care and electric companies will deliver their wood chips for free. Apply a layer of arborist wood chips 4-6 inches deep early in spring. This height will settle over a few weeks. Pull back the wood chips where you plan to plant transplants and recover after planting, but leave a slight gap between the woodchips and the plant stem. If you are sowing seeds, pull the woodchips back in that spot or row and allow the seeds to germinate and get some growth before replacing the woodchips. Other weed suffocation options include – straw, black plastic tarps, shredded leaves. For walking paths between rows, some gardeners use cardboard, newspaper, even old carpet squares. I often leave my garden walking lanes wide enough for my mower and just keep the lawn (or weeds) mowed.

Installing raised beds is another way of weed management before you even plant your veggies. Raised beds allow you control of the soil that you will be growing your tasty tomatoes. A mixture of topsoil and compost works well in raised beds. Some gardeners will use manure-based composts, which is perfectly fine, but many manure-based composts can contain lots of weed seeds. Mulch your raised beds to help suppress any weeds you bring in with your soil and compost.

In my opinion, we should avoid the use of plastic in the yard and garden, but this is one exception to my rule. Black plastic mulch is commonly used by home and commercial growers. The plastic is laid out over the growing beds and holes are cut where the plants will be transplanted. It is often necessary to install drip irrigation under the plastic. I have also noted you will need to weed around the openings in the plastic. Make sure not to damage the crop when doing so. If possible, reuse your plastic. Some plastic mulches are touted to be biodegradable.

These are not just for big farmers. Cover crops are being used by more and more home gardeners. These are often divided into spring and fall cover crops. Spring cover crops grow early in the season and are then terminated with herbicide, a crimper, or tilled into the soil. I prefer fall cover crops that winter kill. I sow them under actively growing crops like tomatoes and peppers in late August (for Central Illinois). They will grow even after the first frosts kill your summer veggies. The winter kill crops will eventually succumb to a hard freeze, creating a fantastic, once-living mulch for spring.

The use of targeted (grasses or broadleaf) or a general-purpose herbicide can be used in killing off existing lawns or other weeds where a garden will be located. Make sure to follow label directions as there are only a few herbicides listed for use in vegetable gardens. If you are killing off a lawn, it may require two applications of a broad spectrum herbicide like glyphosate. Keep application two to three weeks apart according to label directions.

Weed management during the growing season

The strategies outlined above are your best bet to minimize weed pressure in your garden. However, keeping the weeds under control during the growing season is a task that should become a routine for your garden.

The act of cultivating is a fairly low-energy task. It uses the same muscles as if you were sweeping the floor. For most home gardeners, the best cultivating tool is the long-handled hoe. The names of these vary depending on the type of head they have. Some with a rectangular metal head with a sharp blade are called collinear hoes. Others have a stiff wirehead and are called wire hoes. An internet search will yield many more types of cultivators to choose from. Most of us were raised using a digging hoe. This tool is often used in the imagery of gardening. However, this type of hoe requires bending over and is more suited to moving soil, not cultivating it.

Cultivating soil is a simple process. Stand upright with a straight back and slide the head of the cultivator along the soil surface, applying slight pressure to just barely disturb the soil surface and dislodge any weed seedlings. If you cultivate once or twice a week, this reduces a lot of bending over for hand-weeding. The point of cultivation is to prevent the weeds from moving past the seedling stage. Once they grow larger, cultivation get’s more difficult. It also minimizes soil disturbance, that way we are bringing fewer weed seeds up from the weed seed bank. Don’t be too aggressive and ‘dig’ with your cultivator near the base of vegetables as this may damage the plant’s roots.

No matter what tools and tricks you employ, you will still have to pull weeds by hand. How you pull weeds is based on your physical capabilities. The best posture for hand-weeding is to bend over at the waist with your feet straddling the bed. Stick out your rear like a male peacock showing off his tail feathers. Some with hip problems or replacements cannot bend at the hip and need to bend at the knee. And still others with hip and knee problems should use some type of kneeler or stool.

Keeping up with your mulch layer will suppress weed seeds and make it difficult for any germinating weeds to push through the mulch. Any that do, tend to be very easy to pull.

Yes, a drip irrigation system can help suppress weeds. The key is to place drip emitters only where your plants are growing (or place your plants at the drip emitters). That way you are not watering the soil between plantings and creating more conducive spots for weed seed germination.

Some gardeners use an intensive style of gardening by planting closer together in blocks as opposed to rows. Square-foot-gardening follows this style. The idea is that as your crops grow and cover the soil, their canopy will suppress weeds. This works for some crops, but others do need good airflow to limit disease development and to make picking fruit easier.

As was mentioned above, there are not many herbicides labeled for use on a home vegetable garden, and even fewer for when the garden is actively producing food. If you use herbicides in the garden, make sure to follow label directions and only use those listed for vegetable gardens. On several occasions, I have encountered homeowners using a pesticide on their garden not labeled for vegetables and creating a potentially toxic environment that must lie fallow for an entire growing season.

In the end, keep in mind weeds are simply plants growing in a spot that you deem as unsuitable. Some plants classified as weeds can be edible themselves. Dandelions are the classic example of a plant that is edible from root to shoot, but we often try to kill it with extreme malice. For the desperate gardener facing a vegetable patch overcome with weeds, the main thing is to keep the weeds out of the growing row or away from the base of the plant. From there you can work little by little to remove overgrown sections, making sure to go back and cultivate cleared areas. And call your local arborist wood chip supplier!