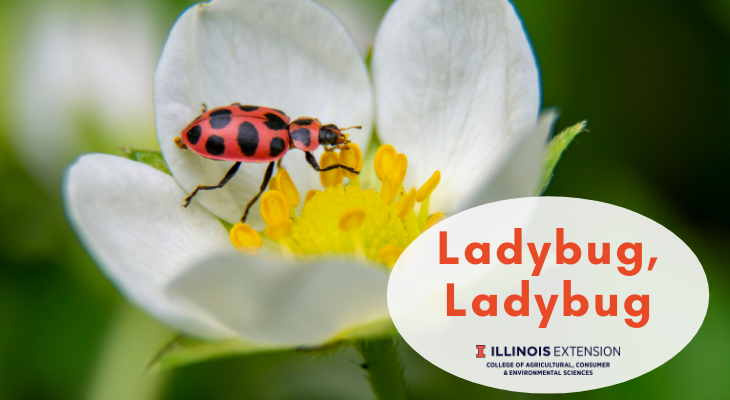 Ladybugs, ladybirds, or more appropriately lady beetles (they are beetles, not bugs after all) are common insects in the landscape. They are one of the darlings of the insect world. They’re commonly found on stationery and clothing, and they are even featured in nursery rhymes and songs. They are also one of the few insects people are excited to have land on them since many believe they bring good luck. While I can’t say whether or not a lady beetle will bring you good luck, they are useful insects to have around the garden.

These dome-shaped insects belong to the family Coccinellidae, which comes from the Latin word coccineus, meaning “colored or dyed scarlet.” While many lady beetles are indeed red, a variety of different colored species can be found. Colors can range from yellow, pink, red, orange, or black, usually with distinct spots. Like many other brightly colored (red, orange, and yellow) insects, they are warning potential predators they may not want to eat them. When disturbed lady beetles may release a smelly, bad tasting liquid out of their leg joints to deter predators. This is why your hands may smell after handling them.

Lady beetles go through four life stages: egg, larva, pupa, and adult. Eggs are long spindle-shaped and are typically yellow to orange in color. Eggs are commonly laid in clusters near a food source. The larvae are flattened and tapered, kind of like an alligator. They are usually dark colored with orange or yellow markings. Since the larvae look so much different than the adults, they are commonly misidentified as some sort of pest. This is one of the reasons why it’s important to ID a potential pest before you try to kill it. After several weeks the larvae will pupate before emerging as adults.

The vast majority of lady beetles are predators (there are a few species, like the Mexican bean beetle and squash beetle, that feed on plants). Both the adults and larvae will feed on a wide variety of different pests such as aphids, whiteflies, scale, mealybugs, mites, insect eggs, and small caterpillars;  some are more specific than others.

Pink spotted lady beetles are medium-sized lady beetles, about ¼ inch long. As their name implies, they are pink (to red) in color with six spots on each of their elytra (the ‘hard shell’). They also have two triangular spots on their thorax (body part behind the head). Here is a series of photos documenting their life cycle. Like many other lady beetles, they feed on a wide variety of pests. According to Cornell University, they feed on pea, green peach, melon (cotton), cabbage, and potato aphids; eggs of European corn borer, imported cabbageworm, fall webworm, and corn earworm; asparagus beetle, Mexican bean beetle, and Colorado potato beetle eggs and larvae.

Unlike other lady beetles, pollen is also a large part of their diet, sometimes up to 50%. Because pollen is an important part of their diet, providing early blooming plants that have a lot of pollen, such as dandelions, can make your landscape more attractive to them. Perhaps this is why I see so many in my yard... In fact, some research has indicated that the presence of dandelions in a crop (alfalfa) can help reduce the numbers of aphids due to their attractiveness (pollen) to these lady beetles. Just another reason to embrace the dandelions in your yard.

Good Growing Fact of the Week: When it comes to eating, lady beetles can be quite voracious. A single beetle may eat as many as 5,000 aphids in its lifetime!