How to successfully grow asparagus in your garden 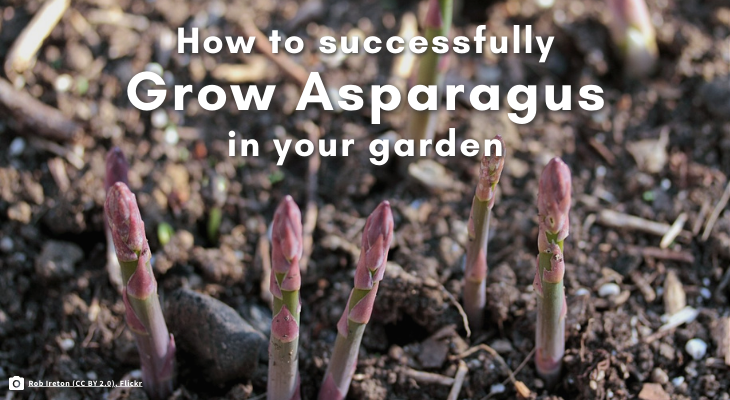 Asparagus is one of the few perennial vegetables that is commonly grown in gardens. But don’t let that intimidate you - it’s a relatively easy crop to grow. However, you’ll need to exercise some patience when growing asparagus.

What type should I grow?

When growing asparagus, you’ll have a choice between planting seeds and crowns. Most people tend to plant one-year-old plants, which are referred to as roots or crowns, and for a good reason. While asparagus seeds will be much less expensive than crowns, it will take much longer to get your plants established (one year to develop the root system, another year for above-ground growth). If you decide to grow asparagus from seed, you’ll need to wait for three or four years before you can start harvesting asparagus! With crowns, you can begin harvesting small amounts the year after they are planted.

Asparagus plants are dioicous, meaning they are either male or female. While female plants tend to produce larger spears, they produce fewer of them. Additionally, female plants will produce fruit and seeds, which take considerable energy from the plant and sprout new seedlings, which may cause overcrowding (become weedy).

While male plants tend to produce smaller spears, they will also produce more of them. Since they aren’t producing seeds, you won’t have to contend with seedlings becoming weedy. Male plants also tend to live longer than female plants. Because of this, male plants are the preferred choice for home gardens.

There are several different varieties of asparagus on the market. Unfortunately, one of the most popular and commonly recommended asparagus varieties will be difficult to find. In 2021 it was announced that the producer of the ‘Jersey’ series (Knight, Giant, and Supreme) has stopped propagating them. Other popular varieties include Millennium, purple passion, and the ‘Washington’ series (Mary, Martha, and Waltham).

Where and how to plant

Once you’ve decided what type of asparagus to grow, you’ll need to decide how much to plant. Obviously, the amount of room you have in your landscape for planting will play a role in this. But, if space is not an issue, 10-20 plants per person is a good start.

Since asparagus is a perennial crop, site selection is going to be important. It’s not uncommon for asparagus plantings to last for 15+ years. It does best in well-drained soils that are in full sun. When selecting your site, make sure it’s an area that isn’t going to be constantly disturbed - placing your asparagus patch in the middle of your vegetable garden probably isn’t the best idea. Also, make sure you are happy with its location; you don’t want to go through the trouble of establishing your asparagus just to have to move it in a few years.

Asparagus can be planted as soon as the ground can be worked in the spring (typically March 15-April 15). When planting, you’ll need to bust out the shovel and some elbow grease.

Weed control is very important when establishing asparagus as well as to develop a good crop. Many people believe that adding salt to asparagus plantings is a good way to go about doing this. While asparagus can tolerate higher salt levels than many plants, it’s not a good idea to be adding salt to the soil. Excess salt will destroy the soil structure and inhibit water penetration into the soil. The salt can also leach out of the asparagus planting and affect other nearby plants.

Instead, early in the season, before asparagus shoots emerge, shallowly cultivate your soil to eliminate weeds. Then add a layer of mulch to help suppress weeds. As the growing season goes on, continue to remove weeds.

During the first three years, plants should be fertilized in the spring with a balanced fertilizer (10-10-10, 12-12-12, or 15-15-15) at a rate of 2 pounds per 100 square feet. Starting in the fourth year, apply the same amount of fertilizer, but wait to apply it until you are done harvesting (June or July).

Now that you’ve gotten your asparagus planted and cared for, when can you begin harvesting? This is where patience comes into play: harvesting too much too early will lead to weak plants and lower yields down the road.

Harvest spears when they are five to eight inches tall. You can do this by either cutting or snapping. When cutting, you’ll want to hold your knife at a 45 angle and cut the spear below the soil line. When cutting, be careful to not cut too far, and damage nearby spears that haven’t emerged yet. This is how Asparagus is usually harvested commercially. When snapping spears, grab them near the base and bend them towards the ground until they snap.

Even though it can be a bit unsightly, it’s best to leave the fern-like growth until it begins to die back in the fall. Like spring bulbs, the foliage of asparagus helps generate energy for the following year.

Good Growing Tip of the Week: White asparagus isn’t a special variety of asparagus – it’s asparagus that has been blanched (grown in the dark). This is done by burying the crowns in more soil, straw, or covering rows with row covers that don’t allow light in.

BONUS Fact of the Week: After eating asparagus, you may notice your urine starts to smell. Asparagus contains aspragusic acid, which is broken down into sulfur-containing compounds by your body; it is believed this is what causes smelly urine. If your urine doesn’t smell after eating asparagus, you may be part of the 40% of the population that can’t smell these odors. Learn more from the University of Utah.