Buffalo gnats and how to avoid being bitten 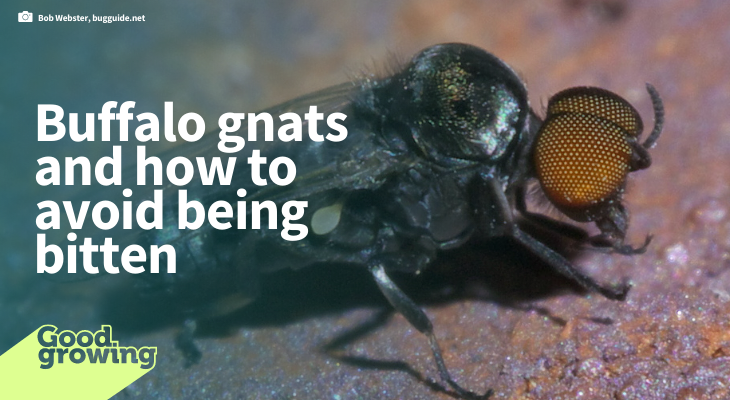 They’re baaaack. If you’ve spent much time outdoors recently, there’s a chance you’ve had an encounter with buffalo gnats.

Buffalo gnats (Simuliidae), also known as black flies, are small, 1/16- to 1/8-inch-long, humpbacked black flies. These humps resemble a buffalo/bison’s hump, which is how they get their common name. Both the males and females will feed on nectar and other sugar sources like plant sap and insect honeydew.

However, like mosquitoes, females need to feed on blood to produce eggs. Females will use their scissor-like mouthparts to bite. These bites can be painful and can cause itching, swelling, red welts, and allergic reactions in some people (due to the flies’ saliva).

In addition to their painful bites on humans, buffalo gnats have been known to kill poultry and other birds when their populations get high. The toxins from their bites can kill the birds, or they can be so numerous they can suffocate them. Buffalo gnats will also feed on the thinly haired areas of dogs, cats, and horses, such as ears and undersides.

After mating and feeding on blood, female buffalo gnats will begin to lay eggs in or near running water. They are usually capable of laying between 150 and 500 eggs over their lifetime. For the most part, buffalo gnats in Illinois will have one generation per year.

Most species of buffalo gnats will overwinter as eggs. After hatching, the spindle-shaped larvae attach themselves to rocks or other submerged items using silk. The larvae need to have flowing water, in part because they are filter feeders. They will use fan-like structures (labral fans) on their heads to capture food such as algae, bacteria, pollen, and other organic matter.

When the time comes, larvae will spin a cocoon underwater and pupate. When the adults are ready to emerge, they will rise to the surface in a bubble of air.

Adult buffalo gnats can fly 10+ miles in search of a meal but are most commonly encountered close to the water sources where they develop (usually around half a mile). Buffalo gnats are attracted to the carbon dioxide exhaled by people and animals as well as to sweat and dark moving objects.

They are most active on calm days, just after sunrise and just before sunset. Individual adults will live for several weeks. Fortunately, once water temperatures start to reach the mid-70s, eggs will stop hatching, and adult populations will begin to decline.

Not much can be done when it comes to controlling (killing) buffalo gnat populations. There are strict regulations about applying pesticides to moving bodies of water, so controlling larva is impractical. Any pesticides used could also have negative effects on other aquatic life, such as fish. Additionally, this would need to be done as part of an area-wide management program. Fogging areas for buffalo gnats does not provide effective, long-term management either.

Instead of getting rid of buffalo gnats, we should try preventing bites. Avoiding infested areas, especially when they are most active (early morning and dusk), is the best way to do this. Like mosquitoes, buffalo gnats aren’t particularly strong fliers, so using fans while outdoors can help reduce bites.

Covering as much of your skin as possible will also help reduce the number of bites you receive, such as wearing long pants and long-sleeved shirts. If you have the option, wear clothing with zippers instead of buttons. Zippers are better than buttons at keeping buffalo gnats from getting inside clothing.

Although many believe DEET-containing insect repellents are not effective, studies have shown that DEET repellents provide the most effective protection. Many have reported that vanilla can be a fairly effective repellent. Fortunately, buffalo gnats won’t bite through clothing like mosquitoes, so only exposed skin will be attacked.

Good Growing Fact of the Week: It may seem like there are more buffalo gnats nowadays than there used to be. This is likely due to cleaner bodies of water. Since our waterways have been becoming cleaner, we have seen an increase in their populations.