How plants eat: A history lesson on photosynthesis 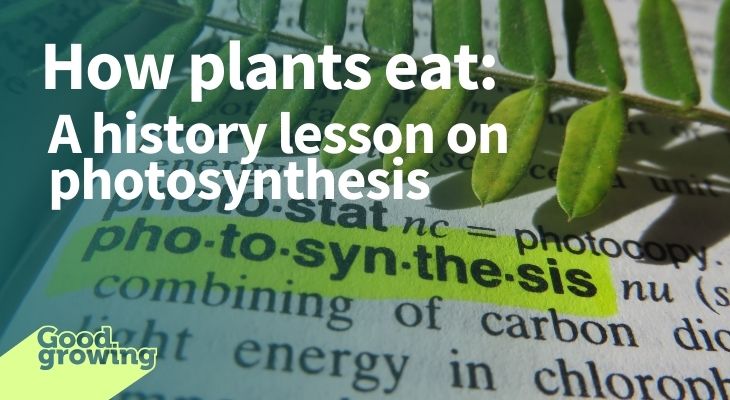 Fertilizer does not actually “feed” your plants. Let’s be clear, plants get their food from sunlight. I know we may have heard about photosynthesis and not paid much mind to this process. I was the same way. I remember sitting in high school biology learning about animal cells and plant cells and then hearing the teacher explain photosynthesis. Without a doubt, the term and definition of photosynthesis were placed in my short-term memory to get me through the next biology test, and afterward, it was mostly forgotten.

It wasn’t until I pondered, “Maybe I could make a career in the world of plants” that the wonder of photosynthesis dawned on me. Think about those primordial Earth days where there was little more than water and rock. Sunlight, which is full of energy, would illuminate these surfaces and that energy would bounce off as reflective light or radiate back out into the atmosphere and then eventually space. Then along comes a single-celled organism, with the audacity to harness light energy and hold it on the surface of the planet. This ancient process of seizing light energy before it can drift off the planet is photosynthesis and the basis for the complex web of energy that gave us well…pretty much everything. Making photosynthesis the most important biological process on Earth!

Photosynthesis works by taking carbon dioxide and water and then mixing them up with some light energy which then creates sugar and oxygen. The “mixing” part is a bit more complex than say making a fruity martini, but the result is just as sweet. The enzyme responsible for binding the carbon into sugar molecules is ribulose 1,5-bisphosphate carboxylase oxygenase, better known as RuBisCO. (RuBisCO is also just fun to say and might be the name of our next family pet.)

RuBisCO evolved at a time when there was no free oxygen in Earth’s atmosphere. Most living things then were adapted to living an oxygen-free lifestyle. These are called anaerobic organisms. The problem with photosynthesis is that the by-product is the creation of oxygen. This spelled doom for the anaerobic crowd. Photosynthesis is thought to be the cause of one of the first mass extinction events in Earth’s history. We still have anaerobic microbes. They exist in low-oxygen environments like water-logged soils, smelly compost piles, and your sourdough starter.

In this new oxygen-rich environment, the photosynthetic organisms thrived. To this day, any photosynthetic plant, bacteria, or algae contains RuBisCO. Yet, it wasn’t all chemically wedded bliss. As it turns out RuBisCO is highly attracted to oxygen, the very byproduct of photosynthesis. When oxygen shows up, instead of binding carbon molecules to create sugars the plant can use as energy, RuBisCO binds oxygen into useless compounds.

Yet through evolutionary time, plants have developed creative ways of getting around the stumbling block of RuBisCO’s attraction to oxygen. Some plants flood the system with more RuBisCO. While others such as C4 plants have created new photosynthetic pathways which gives them a competitive boost.

Good Growing Tip of the Week: How does the ancient story of photosynthesis affect the modern-day gardener? Well, many of these photosynthetic adaptations have made some plants more resilient than others. Hint, hint: C4 plants include ones like crabgrass, nimblewill, pigweed, and nutsedge.