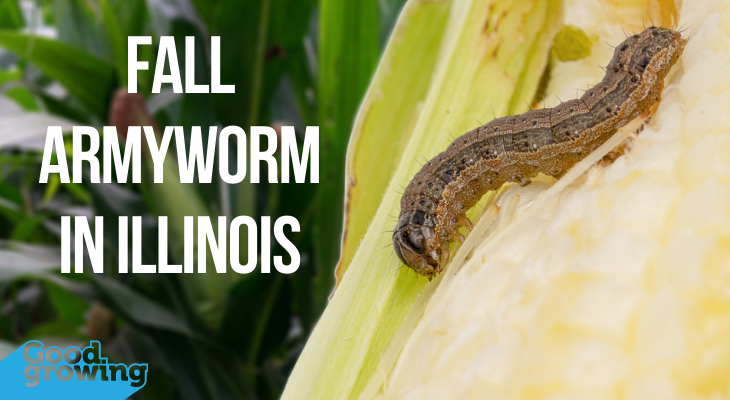 Fall armyworms are here, and can you say destructive? Some entomologists have even said it is the worst they have seen in 30 years! Damage done by fall armyworms this year has been seen in lawns, hayfields, pastures, soybeans, corn, and gardens.

With a large appetite and their habit of “marching” in large numbers, FAW can do some damage in just a few days.

What are Fall Armyworms?

Fall armyworms, FAW, caterpillars can be green, brown, or black with white to yellowish lines running along its back from head to tail with an inverted “Y” between the eyes. Another identifiable characteristic is four black spots in a square on the top of the segment near the back end of the caterpillar. Caterpillars are small at first (less than 1/8”); however, after feeding for about two to three weeks, they grow to be about 1" to 1.5” long.

After feeding, caterpillars tunnel about an inch into the soil and enter the pupal stage from which a moth emerges after about 10 days. From there, it will repeat its lifecycle.

Moths are grey with a pattern of light and dark areas and a wingspan of about 1.5 inches. Moths are more active at night feeding on nectar and depositing eggs. A female moth can deposit up to 2,000 eggs with four to five generations per year. FAW overwinters in the south in areas such as southern Texas and Florida. Southern populations increase in early spring with future generations moving north as the season progresses.

Why are armyworms so bad this year?

Fall armyworms can be found in the Midwest pretty much every year, but this year multiple generations of fall armyworms in the South created a larger than normal population of moths that moved to Midwestern states in late July and early August. The moths laid eggs which then developed into the caterpillars or larva that feed on our crops and lawn.

What kind of damage do armyworms do?

How do you find armyworms?

How do you control armyworms?

Good Growing Fact: The feeding damage we are currently experiencing is from the fall armyworm that visits Illinois in late July/early August, but there is also the true armyworm that moves to the Midwest from the south in April and May.