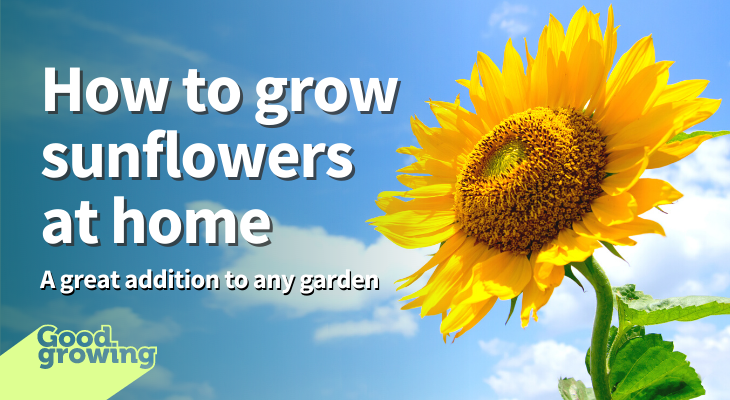 Sunflowers (Helianthus annus) are a great addition to the home garden. Not only do they provide colorful flowers, but they can also be a potential food source for people and wildlife. With various shapes, sizes, and bloom colors, sunflowers are an easy plant to incorporate into your landscape. 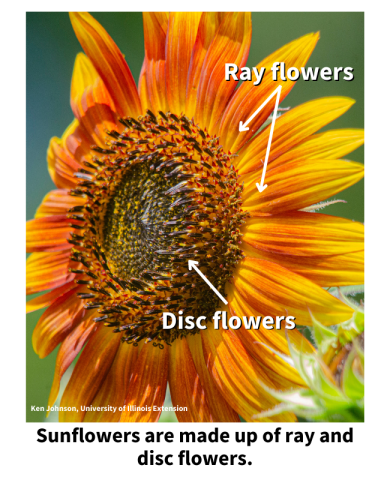 Sunflower flowers aren’t actually a single flower. Rather they are a composite of smaller flowers. What we often think of as the petals of sunflowers are individual flowers, called ray flowers’ while the center of the flowers is made up of disc flowers. So, a single flower can be made up of hundreds of smaller flowers which makes them great plants for pollinators such as bees.

Despite typically being grown as ornamental plants in home gardens, sunflowers have been used as a food crop for thousands of years by Native Americans. It’s believed that sunflowers started being cultivated around 5000 years ago in Arizona and New Mexico, and they’ve been grown in the Midwest for over 2,000 years.

Sunflowers were brought to Europe by Spaniards in the 1500s. They spread throughout Europe, being grown primarily as an ornamental. However, when sunflowers made their way to Russia, things changed, and it was developed into a modern food crop (sunflower oil). In the 1800s, the Holy Orthodox Church prohibited the consumption of many oil foods. But sunflowers weren’t mentioned. Because of this, sunflower oil became a popular food. 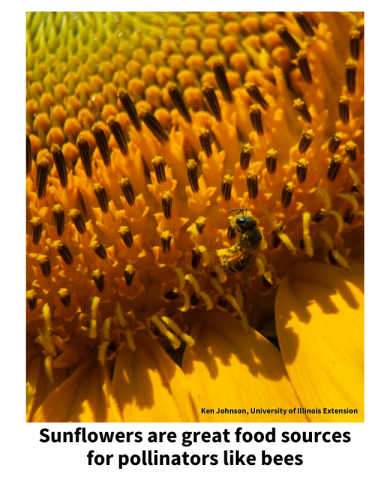 During the 1800s, sunflower production rapidly increased in Russia and spread into Ukraine. By the late 1800/early 1900s, sunflowers became a major crop in Russia, and concentrated breeding efforts had begun to increase the oil content of seeds. Eventually, cultivars like ‘Mammoth Russian’ were introduced into the United States. Commercial production of sunflower oil began in Missouri in 1926, and currently, over 1 million acres of sunflowers are planted for oil production annually (primarily North and South Dakota).

Selecting what sunflowers to grow

When most people think of sunflowers, they think of large, tall plants that may not fit well into smaller landscapes. However, that isn’t always the case. Sunflowers can range in size from 6 inches to 12+ feet tall.

If you are looking for smaller sunflowers, look for dwarf cultivars such as sunny bunch, sunray, and tiger eye that are less than three feet tall. Some cultivars, like Junior or Sunny Smile, may only get a foot or so tall and can be grown in pots!

If you want sunflowers that are a little taller, in the 3-6 foot range, look at plants like Busy Bee, Fire Catcher, or Super Snack. If you want even taller sunflowers, look at Treasure Mountain (up to 10 feet), Kong (up to 14 feet), or Pikes Peak (up to 15 feet tall).

In addition to a wide variety of heights, the blooms of sunflowers can also be different colors. While we often think of sunflowers as yellow, orange, red, and maroon blooming types can also be found. Additionally, certain types may only produce one flower, while others are branching and may produce dozens of flowers on a single plant. 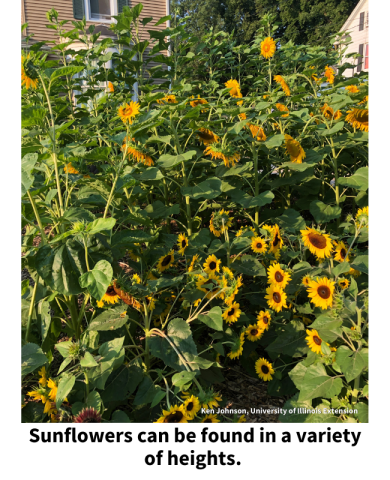 Sunflowers can be found in a variety of heights and colors

Sunflowers are fast-growing annual plants that do best in full sun. Sunflowers are able to grow in a wide variety of soils. So, as long as you have a sunny location and your soils aren’t consistently soggy, you can grow sunflowers.

Sunflowers are typically direct-seeded after the danger of frost has passed (early to mid-May). They can also be started indoors, typically 2-3 weeks before planting outdoors, if you want to get a head start. However, they don’t like having their roots disturbed, so be careful when transplanting. Sunflowers are also good candidates for succession planting (plant every 1-3 weeks), so you can have plants blooming for an extended period of time.

If you have kids or grandkids (or you’re just a big kid yourself), consider growing a sunflower house. Plant sunflowers in a square or circle at least 6-8 feet across (make sure to leave an entryway). Planting two staggered rows will make the walls denser. Before you know it, you’ll have a secret hideaway. 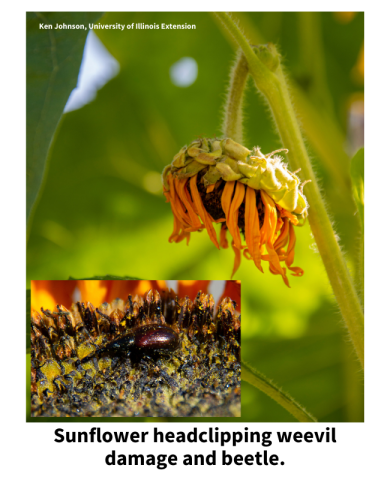 Sunflowers are relatively low-maintenance plants. While sunflowers are drought-tolerant, it is still a good idea to water them if the weather turns dry. Weeds can be a problem when plants are young. Weeds will compete with your sunflowers for light, water, and nutrients and can cause plants to become leggy and weak. Weeds can be managed by hand pulling, hoeing, or using mulches.

Wind: Taller varieties, especially with large flower heads, can be damaged in high winds. Growing them in a sheltered location can help prevent damage from wind. Plants can also be staked to prevent flopping or being damaged by wind. Staking can also help ensure straight stems if you grow sunflowers for cutting.

Wildlife: Depending on why you’re growing sunflowers (as an ornamental, for wildlife, to harvest seeds, etc.), wildlife can also be an issue. Birds and squirrels will often feed on the seeds of sunflowers, which can be an issue if you wish to harvest seeds for yourself. Netting or some other barrier can be used to protect seed heads from animals. Removing the leaves closest to the seed heads can make it harder for birds to perch and feed.

If you wish to harvest sunflower seeds to eat, remove the flower heads and about a foot of stem when they begin to dry out (turn yellow-brown) and start to drop downward. Hang the heads in a warm, dry, well-ventilated area and let them cure for several weeks. Once the seeds have dried, they can be removed from the head and enjoyed.

If you are growing sunflowers as cut flowers, they should be harvested as the flowers begin to open (as the ray flower petals start to rise). Like with other cut flowers, it is best to harvest in the morning when temperatures are cooler. Cut the stems at an angle. This will help keep the stems from lying flat on the bottom of a vase and help with water uptake. Before placing your sunflowers in water, remove most or all of the leaves, especially those that will be underwater.

Good Growing Tip of the Week: If you decide to grow sunflowers for pollinators, look closely at plant descriptions. Many newer sunflowers marketed for cut flowers are pollen-less, meaning they produce little to no pollen, which is an important food source for pollinators like bees.