Insects on the move – dragonfly migration 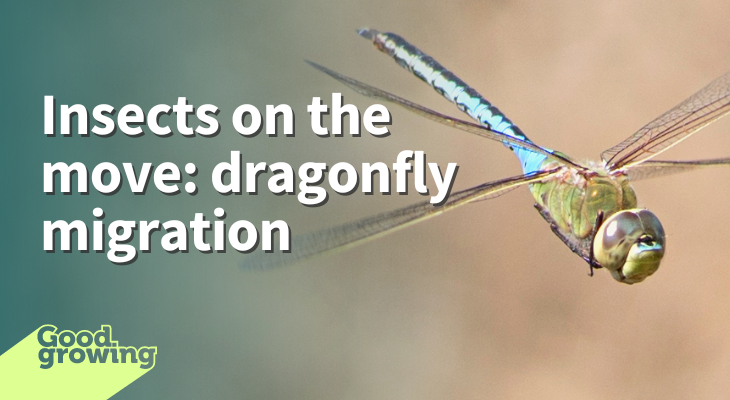 As we approach fall, the days are getting shorter, and the temperatures are starting to cool off. As this happens, we can start seeing changes in the landscape. Many of our landscape plants are beginning to look a little ragged this time of year. While others, like goldenrod and asters, are in their full glory, and before we know it, trees and shrubs will start displaying their fall colors. While our plants are preparing themselves for winter, so are insects.

Many insects will spend the winter here in Illinois, while others will head south. The most famous example of this is the monarch butterfly. In mid-August, monarchs will begin their journey south to Mexico from the northern areas of their summer breeding grounds (September and October in Illinois).

While monarch butterflies get most of the attention, they aren’t the only insects that migrate through the area. Common green darners (Anax junius) can also be seen migrating through Illinois in the fall. 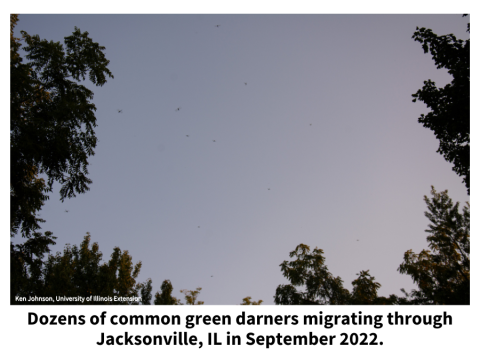 Common green darners are one of the most abundant dragonflies in North America. They are large, reaching 3 inches long with a 3 ½ inch wingspan. Both males and females have bright green thoraxes (middle body segment). The males have a predominantly blue abdomen with a purple stripe, while females have a rust-colored abdomen with a darker stripe.

Adults are commonly seen near lakes, ponds, and slow streams, where they will lay their eggs. The immatures (naiads) are aquatic and will feed on aquatic insects and even tadpoles and small fish. The adults will feed primarily on flying insects like flies, moths, butterflies, mayflies, and other dragonflies.

As mentioned earlier, common green darners will also migrate. Recent research has shown that three generations take part in the annual migration. The migration south begins as early as July (in more northern areas) and will continue through October. Large groups will move south from Canada and the northern U.S. to Mexico and the Gulf coast. As they migrate, they will frequently stop to feed, and the journey can take several weeks. Cold fronts will also help propel them southward.

Once they reach these overwintering areas, the adults will lay eggs and die. This generation will start emerging in November and will stay in these southern locations. Their offspring will emerge from January to May and will migrate north and will be aided in their journey by warm fronts. You can see a graphic of the migration cycle here.

Unlike monarchs, not all common green darners make the journey south. There are also ‘resident populations’ that don’t migrate but overwinter as nymphs (naiads). These individuals will start to emerge as adults from May to July. After eggs are laid, the nymphs will emerge and begin to develop. When water temperatures get too cold, they will stop their development until it warms again. It can take them 11 to 12 months to complete their development compared to 3 to 5 months for those that migrate.

Good Growing Fact of the Week: Monarchs and common green darners are only a few examples of migrating insects. Mike Quinn of Texas A&M University has compiled a list of over 70 species of migratory insects in North America. These include dragonflies, grasshoppers, leafhoppers, a species of aphid, large milkweed bug, butterflies, and moths.

References and for more information