More than monarchs - What are those bugs on my milkweed? 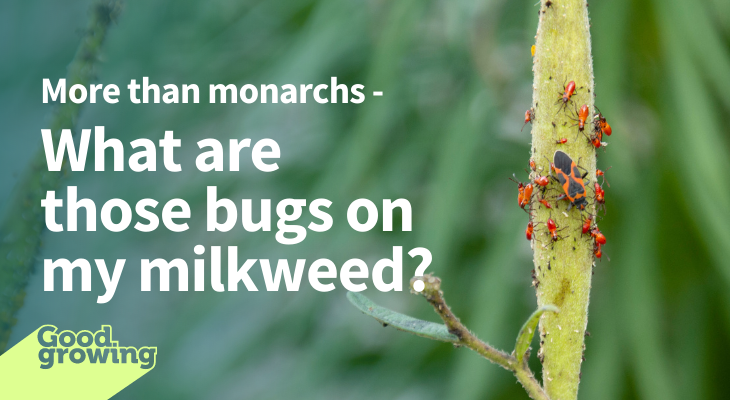 Milkweeds have become a popular garden plant the last several years. They are most commonly planted to help support monarch butterflies because milkweeds are the sole food source for monarch caterpillars.

Milkweeds contain toxic compounds (cardiac glycosides) to deter animals (insects and mammals) from feeding on them. However, monarchs have evolved to be able to feed on these plants. Additionally, they can take these chemicals and incorporate them into their bodies, making them unpalatable as well. 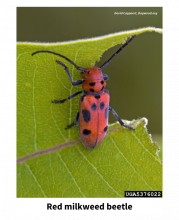 Several different species of longhorn beetles (Cerambycidae) will feed on milkweeds, with the most common species being the red milkweed beetle (Tetraopes tetrophthalmus). The adults are bright red with black spots, have long antennae, and are about ½” long. When disturbed, the adults will squeak.

The adults will feed on the leaves, buds, and flowers of milkweed plants. When feeding on leaves, they will cut the leaf veins below where they are feeding. This will cause the white latex in the leaves to drain out so that it doesn’t gum up their mouthparts.

Females will lay eggs near the base of milkweed plants. When the eggs hatch, the larvae will burrow into and eat the stems and roots of the plants. The larvae will overwinter in the roots before pupating in the spring. The adults will emerge in early summer when milkweeds begin to bloom. 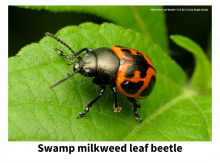 Swamp milkweed leaf beetle (Labidomera clivicollis) is another beetle species that can be found feeding on milkweed. As their name implies, they prefer swamp milkweed, but they will feed other species of milkweed too. Like the red milkweed beetle, both the adults and larvae will cut the veins of milkweed leaves before eating them.

The adults are dome-shaped with a black head and pronotum (the area behind the head). Their elytra (wing covers) are yellow to orange with black to dark blue markings. The larvae are grey to orange with a row of black spots along their side. When fully grown, larvae will drop to the ground and pupate. They will emerge as adults in the fall and feed before overwintering in plant debris (often near the base of milkweed) or in the soil. These adults will then emerge in the spring to resume the cycle. 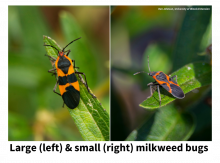 There are two species of true bugs (Hemiptera) that can commonly be found on milkweed, the large and small milkweed bugs. Adult large milkweed bugs (Oncopeltus fasciatus) are ¾” long, orange to reddish-orange, with a black band across their back. The nymphs and adults will feed on milkweed, particularly the seeds, and are commonly found clustering on plants' seed pods.

Monarchs aren’t the only milkweed feeders that travel south for the winter. Large milkweed bugs do too. When temperatures begin to cool and days get shorter, the adults will start migrating south. Eventually, they will end up in the southern Atlantic and Gulf coast states, where they will spend the winter. As temperatures begin to warm in spring, large milkweed bug populations will begin their trek north. 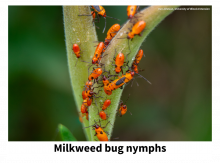 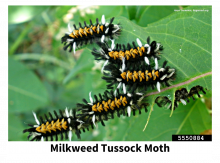 Monarchs aren’t the only caterpillars you may find on milkweed. Milkweed tussock moth (Euchaetes egle) will also feed on milkweeds. The newly hatched caterpillars are pale and hairless with black heads. When they are young, these caterpillars will feed in groups (gregarious) between the veins of milkweed leaves, leaving behind a skeletonized leaf.

As they develop through different instars, they will be covered in tufts of black, white, and orange hairs. These larger caterpillars will cut the veins in leaves to reduce the amount of latex in leaves, allowing them to consume entire leaves. Additionally, as they get larger, they will start to wander away from the group and feed alone or in pairs. When caterpillar populations are high, they are capable of defoliating milkweed plants.

When caterpillars are fully grown, they will drop to the ground and spin a gray cocoon where they will pupate. The adult moths appear rather non-descript with gray wings. However, underneath their wings is an orange abdomen with black spots. Unlike monarchs, which lay single eggs, these moths will lay masses of eggs on the undersides of leaves. 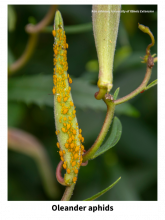 Oleander aphids (Aphis nerii) are probably the most commonly asked about insects found on milkweed (other than monarchs). These aphids are bright yellow with black legs and cornicles. They are native to the Mediterranean region, where their primary host plant is oleander (which is in the same plant family as milkweed). The females reproduce without mating (parthenogenesis) and give birth to live clones of themselves (they don’t lay eggs). This means populations are capable of growing quickly.

Like other aphids, they are often found in clusters on new growth. They have straw-like mouthparts and will suck sap from plants. Excessive feeding can cause plants to be stunted or deformed. Additionally, they produce honeydew, which can lead to the development of sooty mold.

What should I do?

Many people who grow milkweeds for monarchs aren’t particularly excited when they find other insects feeding on their milkweed plants. However, all of these insects, except for oleander aphids, are native to the U.S. and Illinois and have been feeding on milkweed with monarchs for a long time.

Out of all these insects, oleander aphids are probably the only ones you could consider pests that may need some management. Spraying the aphid colonies with a strong spray of water is often all that needs to be done. However, by doing this, you risk removing small monarch caterpillars too. As with other aphids, natural enemies, like lady beetles, lacewings, syrphid flies, and parasitoid wasps, will come in and manage populations.

Insecticides could also be used to manage these other milkweed feeders. However, this is not a good idea if you are trying to provide food for monarchs. Any pesticide that is going to kill these insects will also kill monarch caterpillars.

Instead of being concerned about the presence of these other insects, be happy that you have provided an environment that is suitable for these insects to thrive. Just remember, they depend on milkweed just as much as monarchs do.

Bonus Fact of the Week: Red milkweed beetles have interesting eyes. They belong to the genus Tetraopes, which comes from the Greek tetra, meaning four, and ops, meaning eye. The eyes of these insects have been divided in two by their antennae, making it look like they have four eyes. Additionally, its specific epithet, tetrophthalmus, also means ‘four-eyed’.

Want to learn more about other insects that can be found on milkweeds? Check out Milkweed, Monarchs, and More by Ba Rea, Karen Oberhauser and Michael A. Quinn.