Not all bugs are bad: Good bugs in the garden 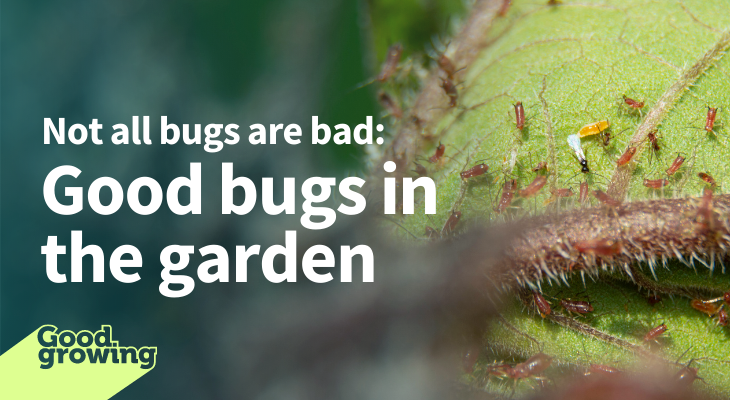 While it may seem like every insect out there is trying to eat your plants, not all the insects you see in your garden are pests. In fact, fewer than 1% of all insects are considered pests, meaning the vast majority are beneficial or, at the very least, benign.

"While most people are aware of the benefits of bees and other pollinators, a lot of other types of insects are beneficial in our gardens by helping to control pest insect populations in your landscape," says Ken, Johnson, Illinois Extension Horticulture Educator. "These insects, or natural enemies, can be broken up into two different groups, predators and parasitoids.

Predatory insects will feed on many different types of garden pests. Predatory insects include lady beetles, praying mantids, assassin bugs, lacewings, wasps, and syrphid flies. Depending on the insect, the larva, adults, or both stages can be predators. Here are few examples of some of the predatory insects you may find in your landscape.

Lady beetles are probably the most widely known predatory insect. These beetles are dome-shaped insects that range in color from yellow, pink, red, orange, or black, usually with distinct spots. Both the adults and larvae are predatory on small, soft-bodied insects like aphids. The larvae are flattened and tapered, kind of like an alligator. They are usually dark-colored with orange or yellow markings. Since the larvae look so much different than the adults, they are commonly misidentified as a pest.

Other beetles, like ground beetles, can also be important predators in gardens. Most are shiny and black and are typically found on the ground under leaves, logs, stones, loose bark, and grassy areas. They are most active at night and will feed on a variety of insects such as caterpillars, beetle larvae, snails, and other soft-bodied insects. Ground beetle larvae also feed on soil-dwelling insects.

Praying mantids are another well-known predatory insect. These large insects will eat whatever they can catch, whether it’s a pest or another beneficial such as bees. There are several species native to Illinois, but the most commonly encountered species is probably the Chinese mantis. Mantids probably don’t have a major impact on pest populations in gardens.

Assassin bugs and other predatory bugs use their straw-like mouthparts to impale their prey and then suck out the body fluids (like a juice box). These insects come in various sizes and colors, but one of the best known is the wheel bug. And even though we typically think of them as pests, some species of stink bugs are predatory. Like other predatory bugs, these predatory stink bugs have thicker mouthparts compared to their plant-feeding cousins. Predatory bugs will feed on pests such as aphids, leafhoppers, caterpillars, and beetles.

Green lacewings can be important predators of aphids and other small, soft-bodied insects. The larvae are alligator-like and have large sickle shaped mouthparts. They are predaceous and are often referred to as aphid lions. The adults are not always predators and can commonly be found on flowers feeding on pollen and nectar. The eggs of these insects are laid on stalks.

Syrphid flies range in size from ¼ to ¾ of an inch long and resemble bees and wasps with yellow, orange, and black markings and can be important pollinators. The predaceous larvae are legless with a tapered body and range in color from creamy-white to green or brown. They will feed on aphids and other small soft-bodied insects such as mealy bugs, scale, thrips, and eggs.

Despite their bad name, wasps such as yellowjackets, baldfaced hornets, and paper wasps can have a significant impact on the number of pests in a garden. The adults will hunt and capture insects such as caterpillars, flies, crickets, and grasshoppers to feed their young. The adults, on the other hand, feed on flower nectar and other sweet liquids.

Spiders can also have a significant impact on pest species in gardens. We typically think of spiders catching their prey in webs like orb weavers do. However, many spiders, like wolf spiders, crab spiders, and jumping spiders, don’t spin webs to catch their prey. Instead, they hunt or ambush their prey.

Parasitoids tend to be much more specialized in the insects they will feed on. They may only attack one type of insect, like caterpillars, or in some cases, one species. The adults will look for their hosts and lay their eggs on or in them. Once the egg hatches, it will start to feed on its host, eventually killing it.

Most parasitoid wasps are small; you would probably confuse them for a gnat. These small wasps will attack various insects, including aphids, whiteflies, mealybugs, caterpillars, and insect eggs. After consuming their host, the larvae will pupate, and adult wasps will emerge and go on lay eggs on new hosts.

Insects that these insects have parasitized will often look different than normal. Aphids that wasps have parasitized will eventually turn brown or black and paper-like (called mummies). In some caterpillars, like hornworms, the larvae will spin white cocoons on the outside of its host, which are commonly confused for eggs.

Some species of flies, like tachinid flies, are also parasitoids. The adults will lay eggs on or in their hosts, like caterpillars and beetles. The larvae of these flies will tunnel into their host and feed inside of it, eventually killing it.

How can I attract and keep beneficial insects in my landscape?

While many natural enemies can be purchased, making some changes to how you manage your landscape can make it much more attractive to these insects and help keep them around long term.

The next time you find a mystery insect in your garden, make sure you identify it before trying to kill it; it may be something that will end up killing the ‘bad’ bugs for you.

Good Growing tip of the week: If you notice pests in the garden, such as aphids, check closely to see if any predators and parasitoids present. If you have beneficial insects, you may not need to do anything to manage your pests.

Want to learn more? Check out this Good Growing webinar: