It's big, but it's not a murder hornet: How to identify large wasps 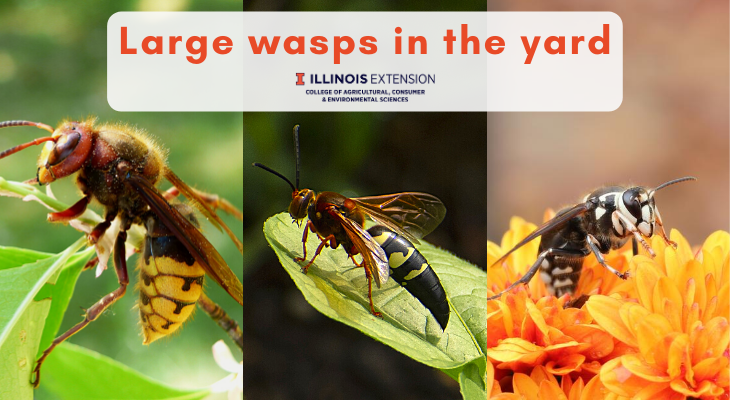 Wasps have an undeserved bad reputation. While some species can be a tad on the aggressive side, they are, as a whole, rather beneficial. Admittedly they can be intimidating insects, particularly large ones.

This year we have received more reports about large wasps than usual. Perhaps it’s because we’re spending more time at home and out in our landscapes. Maybe it’s because of the excitement over "murder hornets" - which are not in Illinois.

Regardless, several species of large wasps commonly found in Illinois are being confused with the Asian giant hornet: cicada killers, boldfaced hornets, and European hornets.

As you can see, it may be easy to confuse these wasps with Asian giant hornets (Vespa mandarinia). However, there are some key differences. Asian giant hornets are 1.5 – 1.75 inches long and much bulkier in appearance. They also have a yellow to orange head, and their abdomens have orange and black stripes. If you want to learn more about Asian giant hornets, check out Asian Giant Hornets: Your Questions Answered from the Home, Yard & Garden Pest Newsletter.

The species I’ve been getting questions about the most, particularly now in late summer, are cicada killers (Sphecius speciosus). Cicada killers can be up to 1.5 inches long and are black with yellow markings on the thorax and abdomen. They have large, rust-colored eyes as well as orangish-red wings and legs.

Cicada killers are a native wasp species, and as their name implies, they hunt cicadas. Females will fly up into tree canopies to capture and paralyze cicadas. She will then deposit them in underground tunnels where she will lay eggs on them. The eggs will hatch, and the larva will burrow into the cicada and begin to feed on it (while the cicada is still alive). The larva will overwinter in the burrow and pupate in the spring. Adults will begin to emerge in July, around the time when annual cicadas start emerging and will live into September.

They tend to build their burrows in well-drained areas with light-textured soils (think sandy instead of clay) that are in full sun. They can often be found along sidewalks or patio edges, in flower beds, gardens, or lawns. When building their burrows, they can bring a lot of soil up to the surface. Some people may find this undesirable, especially in highly managed turf/yards.

While the larvae feed on cicadas, the adults feed on flower nectar and tree sap. The males are territorial and will try to intimidate things (including humans) that enter their territory. Males are harmless, though, and they cannot sting. Females are not aggressive (they don’t protect their nests) and typically won’t sting unless handled or stepped on. Because of this, control is often unnecessary.

Management: One way of discouraging their nest building in yards is to have a healthy, dense stand of turf. If they are nesting in landscape beds, mulch or a groundcover can be used. Another potential strategy to discourage them from nesting in an area is to make sure that the soil remains moist. The wasps don’t like wet soil, and watering the ground may help the soil settle into their tunnels, further discouraging them.

If you would like to use an insecticide to manage them, you can apply an insecticide containing permethrin and carbaryl to the entrances of their tunnels. Make sure it to read and follow all label directions. These strategies will be most successful if performed before or shortly after the wasps are emerging in July.

Baldfaced hornets (Dolichovespula maculata) are another native wasp species. They are 0.5 - 0.8 inches in length and have a black body with distinctive white markings on their head. They also have white banding on the last few segments of their abdomen.

Unlike cicada killers, baldfaced hornets are social insects. They will build an aerial nest (3+ feet above the ground), attached to tree branches, typically near wooded areas. They can also occasionally be found in shrubs, on utility poles, or the siding of homes. Like other social wasps, they will defend their nests (sting) if they feel threatened.

A single queen starts each baldfaced hornet nest. She will begin constructing the nest by collecting wood fibers and mixing them with her saliva. This will create a papery material that she will use to create the nest. After she has built a small nest, she will lay eggs. The workers from these eggs will take over nest construction, foraging for food, and caring for the young while the queen will focus on egg-laying. Near the end of summer, colonies will produce new queens and males. They will mate, and the females will overwinter and begin new colonies in the spring.

Baldfaced hornets will capture other insects, particularly flies, to feed their young. Adults will also visit flowers to feed on nectar as well as other sugary food sources such as fruit and tree sap.

European hornets (Vespa crabro) were first found in the United States around 1840. These hornets are about one inch long with yellow and brown coloration. They have black and yellow-banded abdomens, with the black bands extending into V-shaped markings. One unique thing about European hornets is that they are active at night, unlike other bees and wasps.

European hornets are also social insects. Their colonies will begin as a single queen, and will grow over the year, and can contain 300 or more workers by late summer. They will create their nests in cavities, such as hollow trees (and on occasion, wall voids). Like baldfaced hornets, they will collect wood fibers to build their nests. These hornets will defend their nests (sting) if they feel threatened, but they are not as aggressive as some other social wasps. During mid- to late-summer new queens and males will be produced. They will mate, and the queens will find somewhere to overwinter (under loose bark, in tree cavities, etc.) until spring.

The adults can occasionally be pests. They may feed on fruit trees in the fall, and they may girdle twigs and branches of trees and shrubs to feed on sap (or to use the fibers to build their nests). Despite this, they are beneficial. They will capture a variety of different insects such as crickets, grasshoppers, large flies, caterpillars, and yellowjackets to feed to their larva.

Management of baldfaced and European hornets is similar. Both of these insects’ colonies are annual (colonies will die after a hard freeze or two) and will not be reused the following year. Therefore, if the colonies don’t pose a threat, it is best to leave them be (remember they eat other insects).

If they do pose a threat, a ready-to-use wasp and hornet spray can be used. Make sure to read and follow all label directions. It is best to do this at night. Since European hornets are attracted to light, make sure to place your light source away from you. It is also a good idea to wear protective clothing such as a thick jacket, long pants tucked into socks, gloves, and a hat. If you are not comfortable trying to control these insects on our own, or if their nest is inside a building, it may be best to contact a pest control professional.

Other Wasps of Illinois

There are many other types of wasps, such as yellowjackets, paper wasps, potter wasps, mud daubers, velvet ants, and horntails, not to mention parasitoid wasps that can be found in Illinois. I’m probably lucky you’ve read this far (you get a gold star), so they’ll have to be a topic for another day.

Good Growing Fact of the Week: European hornets are the only true hornets found in Illinois (hornets belong to the genus Vespa). Baldfaced hornets, on the other hand, are actually a type of yellowjacket.