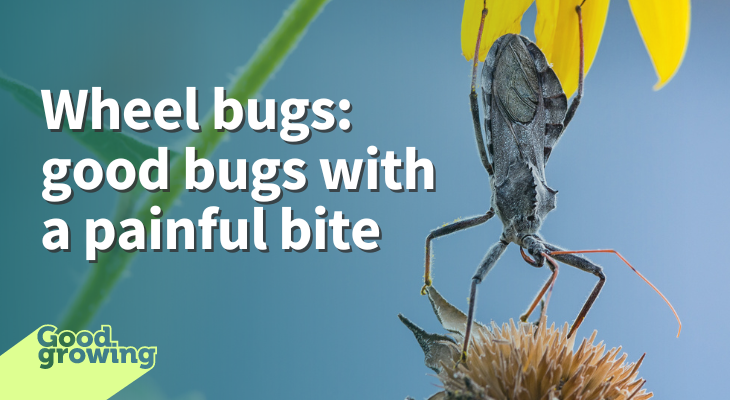 As we transition from summer to fall and the temperatures start cooling off, many of us will be spending more time outdoors. While enjoying our time outdoors, we often encounter various insets we may not have seen or noticed earlier in the growing season. One such insect is the unusual, and to some scary, looking wheel bug. 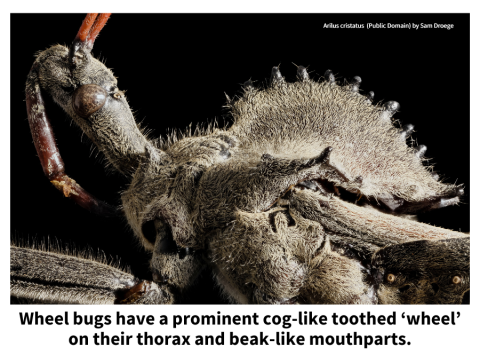 Adult wheel bugs (Arilus cristatus) are large (1 to 1-1/2 inches long) light gray to grayish-brown distinctive-looking insects. They get their name from the prominent cog-like toothed ‘wheel’ on their thorax (there can be 8-12 teeth/tubercles on this wheel). They are the only insects in Illinois (or the U.S.) to have such a structure. They also have beak-like mouthparts that arise from the front of their head, which some think resembles an elephant's trunk.

The nymphs are red and black when they first hatch. Later instars (stages) lose the red coloring, becoming black and gray. Unlike the adults, the nymphs do not have a ‘wheel’ on their thorax. This does not develop until they reach adulthood.

What do they do?

Wheel bugs are a type of assassin bug (family Reduviidae), so they are predators. They have raptorial front legs (like praying mantids) that they will use to grab prey. Once they have captured their prey, they insert their mouthparts into their prey and inject their saliva, which contains chemicals that paralyze the prey and begin digesting it. They will then suck out the ‘juices’ of the insect, like drinking a juice box. 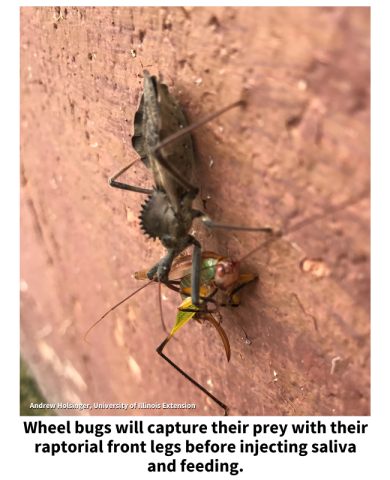 They are generalist predators, meaning they will feed on a wide variety of different insects. They can commonly be found feeding on pests like caterpillars, beetles, sawfly larvae, aphids, and stink bugs, among others. In fact, wheel bugs are one of the few insects that will feed on the invasive brown marmorated stink bug.

Because they are generalist predators, they may also feed on insects we would consider beneficial, such as honey bees and wasps. However, the benefit of their feeding on pest insects far outweighs the occasional beneficial insect that may be eaten.

Why are we seeing them now?

While we can find wheel bugs throughout the growing season (eggs hatch in spring), we commonly overlook the smaller nymphs. The nymphs will begin maturing into adults from mid-summer to fall. The larger, more impressive-looking adults catch our eyes much better than the nymphs do.

Adults are often attracted to lights at night, bringing them close to our homes, where they will search for prey. They are also on the move this time of year, looking for potential mates as well as places to lay their barrel-shaped eggs (usually on trees and shrubs)

Because of their large size and intimidating appearance, people are often concerned that they may pose a threat. While wheel bugs are not aggressive and avoid contact with humans, they will defend themselves (bite or, perhaps more accurately, stab) if harassed or handled.

Their bite has been described as being as bad or worse than a sting from a wasp or hornet. After the initial pain of the bite, which can last for several minutes, the area may be numb for several days, and it may take a few weeks for the wound to heal.

While they may look dangerous and pack a painful bite, remember they aren’t aggressive or out to get you, and they help control pests.

Good Growing Fact of the Week: Like their stink bug cousins, wheel bugs will release an unpleasant chemical when disturbed, although not as potent.