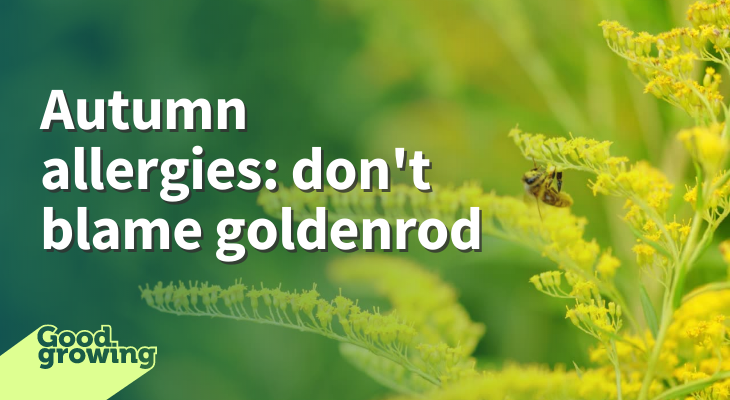 As the growing season draws to an end, temperatures cool, woody plants prepare for dormancy, and we enjoy the last blooms of the season. For many of us, autumn also means sniffles and sneezes caused by seasonal allergies.

Seasonal allergies are a reaction to airborne pollen entering the body and being misidentified as a threat. Itchy eyes, runny noses, sneezing, and congestion are frustrating symptoms, so many of us look around for the culprit and notice the bright yellow blooms of goldenrod. The correlation between seasonal allergies and the bloom time of goldenrod is strong but this does not equal causation. Goldenrod is not to blame…ragweed is the guilty species.

Goldenrod species (Solidago spp.) bloom bright yellow throughout the Midwest in our wild spaces and backyards. The bold blossoms attract the attention of insect pollinators and people. With this comes a curse, it is often accused as being the source of allergy-causing pollen. However, being insect pollinated, goldenrod produces pollen grains too heavy to be transported by wind. The allergy-causing culprit is ragweed.

Giant ragweed (Ambrosia trifida) is native to the Midwest and is a wind-pollinated, annual plant. Each autumn, giant ragweed takes its best shot at reproduction by releasing millions of pollen grains into the air. Having no need to appeal to insect pollinators, ragweed flowers are green and blend into the landscape. But for allergy sufferers, ragweed pollen demands attention.

For any species, reproduction is the name of the game. Without producing offspring, species cease to exist. In the plant kingdom, most reproduction is achieved through seed development. How are those seeds produced? Well, this is where the birds and the bees conversation becomes literal and how we know goldenrod is not to blame for our seasonal allergies.

It is estimated that 88% of the world’s plants are pollinated by animals moving pollen grains from the male anther of a flower to the female stigma of the same or another flower. The remaining 12% of plants rely on the wind to disperse pollen.

Generally speaking, plants that rely on animals for pollination have evolved strategies for attracting animals to their flowers. Bright color blooms, fragrances, and nectar rewards help entice pollinators to visit plants, putting them in a position to transport pollen from flower to flower. These pollen grains are often large and sticky to hitch a ride on the backs, legs, heads, or bodies of pollinators.

Allergies and the Environment

According to the Centers for Disease Control and Prevention (CDC), hay fever affects as many as 60 million people each year in the United States. The CDC also reports that the changing climate has the potential to lead to a greater abundance of pollen being produced and an extended pollen production season, causing more people to suffer.