I have been composting yard and organic material for a while now. However, when I have just a few food scraps, sometimes it can be inconvenient either to carry them outside to the compost pile, or to save to do later.

Deciding to add options to my repertoire, I thought I'd give worm composting, called vermicomposting, a try. Laziness and thinking of impending winter was part of my impetus to try indoor composting, I admit, but also I was just curious about it! 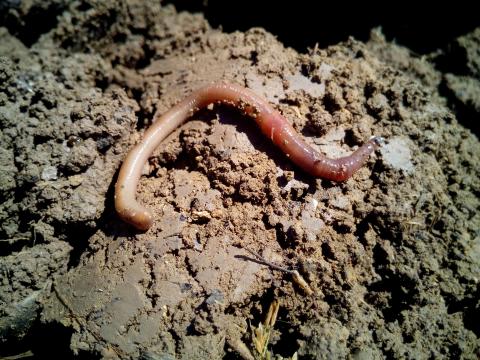 How does composting and vermiculture work?

Composting of any kind removes uneaten organic materials from the waste stream. In landfills, organic materials create methane gas, a greenhouse gas, as a by-product. Composting is the classic "reduce, recycle, reuse" mantra come to life with an additional "R."

Vermiculture is a subtype of composting. It does not take much space, and produces little to no odor making it ideal for indoor composting. The worms eat organic materials and create worm castings, a powerful additive that increases soil fertility.

What kind of worms?

Red Wrigglers, or plain red worms as anglers know them, are the worm of choice for vermicomposting. Their scientific name Eisenia fetida is pronounced "iSEEnee a FETid a."

Unlike earthworms that carry their food deep into the soil, red worms are surface feeders. This and the fact that they are happiest at temperatures between 50-70°F makes them ideally suited to live indoors.

Red worms can eat half their body weight in food each day. One pound of worms will consume about one-half pound food daily or about three and a half pounds each week!

They reproduce much faster than earthworms and in proper living conditions can double in population every three months.

The Vermiculture Experiment: What did I get myself into?

I’m not going to say I wasn’t apprehensive at first. I love science and nature as much as the next person, but I wasn't sure how I felt about having worms indoors. Forging ahead anyway, I set up the bin, purchased 1,000 worms, about 1 pound's worth, and proceeded with caution by adding a half-cup of vegetable peelings.

A few days later, someone threw in a whole banana peel….gasp! A week and half-later, the original offerings and banana peel were gone.

Astounding, right? I thought it was, and my worm aversion conversion was complete. The worms are now eating much of the daily kitchen scraps, and the little Adams Family-esque pets are so appreciated. Check out this cute micro video to see my real worms!

I still get a little amazed and always grateful for the transformation that takes place in my outdoor bin, turning organic material into that wonderfully brown-black, nutrient-rich substance called compost. However, I'm happy my occasional laziness and curiosity compelled me to try the fast, up-close and personal method of vermicomposting.

Vermiculture might even be a fun and educational thing to do with the whole family. For more information on the subject, see below or contact the experts in your local Illinois Extension office for more information.