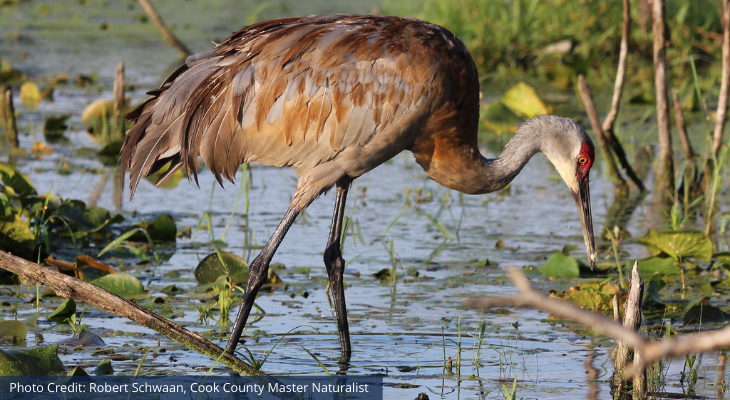 Growing up in central Illinois, I was familiar with swaths of Canada Geese migrating across the sky and their characteristic HONK!, but after moving to Northeastern Illinois, I have discovered the joy of a slightly more charismatic bird that captures the hearts of naturalists and nature enthusiasts alike with their Gurrooo-gurroo-gurroo calls and large migrating flocks.

The Sandhill Crane (Antigone canadensis) is a fairly large grey bird, whose characteristic rattling bugle calls and large flocks fill the skies in the spring and fall. There are six different populations of Sandhill Cranes in the United States; the ones that flyover and stop in Illinois are called the Eastern Population. These are the cranes that, starting in Mid-September through Mid-November, are found in the northeastern Illinois skies migrating south to their winter homes in the southern United States. Northern Illinois is a key staging area for these charismatic cranes-meaning they stop here to rest, drink, and eat.

These birds were once a rare sight in Illinois with only two dozen breeding pairs in the upper Midwest in the 1930s. However, researchers estimate that  due to restoration of essential breeding habitats such as wetlands, marshes, and prairies, sandhill crane populations have doubled over the last decade growing at a rate of 4.4% each year according to the U.S. Fish and Wildlife Service. Overall, conservation of these birds is a Midwest success story.

Sandhill Cranes can be alarming upon first encountering them on the ground. They stand three-and-a-half to four feet tall with a wingspan of six to seven feet, and like many species in the crane family, they have long necks and legs. A defining feature of Sandhill cranes is the red cap on their heads which is only present in adults. As they migrate, Sandhill Cranes can cover an average of 200 miles in a day through rising in thermals and gliding great distances.

As you embark on your fall stewardship, hikes, or just a walk around your block, keep your ear out for the sounds of migrating birds and if you’re lucky-and in the right spot in Illinois-you just might hear these magnificent birds bugling across the skies.

Learn more about Sandhill Cranes from the U.S. Fish and Wildlife Service, Wildlife Illinois, Cornell’s Lab of Ornithology, or the Audubon Society.

Abigail Garofalo is an Energy and Environmental Stewardship Educator for Cook County. She manages the Cook County Master Naturalist program and the Conservation@Home program for University of Illinois Extension. She has a BS in Natural Resources and Environmental Sciences and MS in Agricultural Leadership Education both from University of Illinois Urbana Champaign. Her background in is environmental outreach and interpretation and works to create a culture of environmentalism through community buidling.