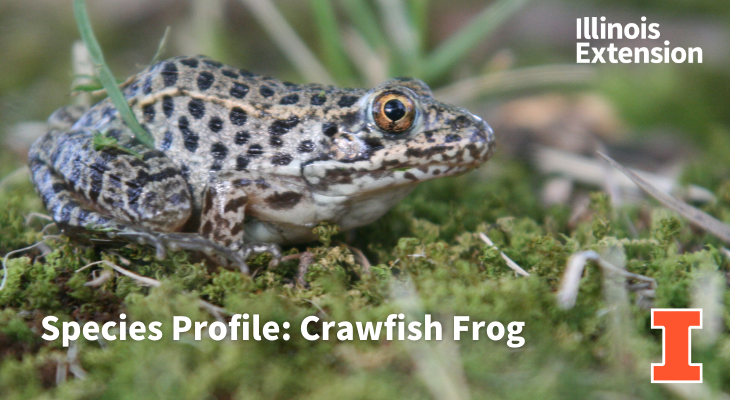 Imagine you are five years old and playing in the tall grass, feeling the spongy wet soil beneath your feet, when suddenly the quiet is interrupted by shockingly loud, deep guttural calls all around you.   You are startled beyond your wits and leap out of the grass in a rush back to the house thinking some huge predator must be close at your heels.  That was my daughter’s introduction to crawfish frogs!

Crawfish frogs (Lithobates areolatus) do not live where you think a frog should live and definitely do not sound like what you think a frog should sound like. Historically, this was a frog of the southern prairies.  For most of their lives, crawfish frogs live underground, beneath wet prairies, meadows, and other grasslands.  They often live in crawfish burrows or other animal tunnels, feeding on small crawfish and invertebrates.

They are one of the first frogs to call in the spring (often starting in February), first from their burrow entrances in the grassland, then moving to ponds or other wetlands where they breed.  Calling is often triggered in the spring by heavy rain events and warming nighttime temperatures.  I usually associate crawfish frog calling with woodcock displaying as they often happen about the same time of year in similar habitats. Their call is a deep, guttural ‘snore’.  A full chorus sometimes is described as sounding like a group of hogs hungrily feeding. It is hard to describe how loud these calls can be!  Warm spring nights when crawfish frogs are heard with the other early calling frogs, such as spring peepers and chorus frogs, can create a beautiful cacophony of sounds that is wonderful to listen to!

While hearing these frogs is much more common than seeing them, crawfish frogs are actually one of the largest frogs in Illinois.  The have large heads on short bodies.  Dark, irregular spots cover their back and sides.  Older individuals will often form a humped lower back.    Because they spend almost all of their lives underground, they do not have strong rear legs and won’t win any jumping contests!

Crawfish frogs are found in the southern half of the state.  While they are not listed as Threatened or Endangered, they are listed as a Species in Greatest Conservation Need in Illinois due to declining populations brought on by loss of habitat.  With the loss of much of the native grassland in Illinois, crawfish frogs now primarily are found in pastures and hayfields.  One of the most important practices landowners can do to help conserve this species is to provide fish-free wetland habitats such as farm ponds or flooded fields.  The next time you are exploring wet grasslands and you hear some loud snoring, don’t run away!  Instead, start looking around for the one of the most interesting amphibians that lives in Illinois.

More information on the distribution and status of crawfish frogs in Illinois is available from the 2018 article by John Palis in the Transaction of the Illinois Academy of Sciences.

Chris Evans is an Extension Forestry and Research Specialist and the Interim State Coordinator for the Master Naturalist Program.  He has been with the University for over five years.  Chris has a BS in Wildlife Biology from Murray State University and a MS in Forest Biology from Iowa State University.  He is interested in forest health and management, native plant restoration, and invasive species management.