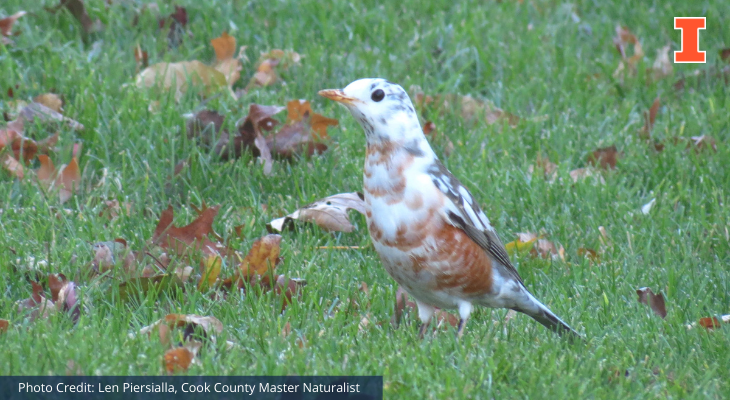 A couple of months ago, a Master Naturalist sent in an interesting photo of a bird. It was dark brown on the back with a reddish-brown belly but with white discoloration all over its body. Almost like nature’s printer was having ink issues as our bird was printed. Upon closer inspection, our Master Naturalist found the bird was a robin, but a special kind called colloquially: “piebald.” Some search on this topic found that this bird is not albino, but a term called leucistic. Meaning our robin has a partial loss of pigment- allowing some of the feathers to retain their normal coloration, and most importantly, the retention of color in this bird’s feet, beak, and eyes. Albino animals have very distinct pink eyes, while leucistic animals have standard eye color.

Several months later, I was doing some research on squirrels, and I came across a similar phenomenon in a population of Eastern Grey Squirrels in Olney, Illinois. Olney is home to a famous population of white squirrels. I was curious, how many animals in our world could be affected by leucism? And how common are they?

The answer to the first question is simple; almost any animal can have leucism. If it has pigmentation, then that animal can have the genetic mutation that causes a partial lack of pigment. Color abnormalities such as albinism, melanism (an excessive amount of pigmentation), and leucism can affect birds, mammals, reptiles, amphibians, and even fish. The second question is a bit more complicated and made even more complicated by human interaction.

From a biological perspective, white as a color reflects light more efficiently; therefore, a lack of coloration can be deadly for animals that rely on sunbathing or solar radiation for heat (i.e., reptiles and amphibians). From a natural selection perspective, leucistic animals can survive if their unique coloration does not interact with their ability to hide from predators or attract mates. Many bird species, for example, rely on bright coloration to attract mates. Duller colors, particularly in males, are less attractive to females and therefore less likely to mate.

For camouflage, a bright white deer is easy to spot, even for the weaker human eye. A bobcat, coyote, or human hunter should have no problem viewing and landing the poorly camouflaged deer. However, although we have no official totals, white deer are much more common than they were even 30 years ago. Why is that? In short, humans are providing selective pressure towards leucism of these animals.

Culturally, these animals are a novelty. An awe-inspiring beauty that pushes us to protect them for their unique features. Even providing tourist attractions in the case of the Olney’s white squirrels. Additionally, many hunters view shooting white deer superstitiously- that they may never bag a deer again. Some states have even banned the shooting of white deer (Illinois included)- for cultural reasons as opposed to ecological ones.

It’s important to note that these leucistic animals are animals with a genetic anomaly, not a separate, rare or endangered species. These uniquely colored animals provide us some fascinating lessons in ecology and human influences in nature. It makes me wonder what other examples of selective pressure humans are having on our species and ecology.

Abigail Garofalo is an Energy and Environmental Stewardship Educator for Cook County. She manages the Cook County Master Naturalist program and the Conservation@Home program for University of Illinois Extension. She has a BS in Natural Resources and Environmental Sciences and MS in Agricultural Leadership Education both from University of Illinois Urbana Champaign. Her background in is environmental outreach and interpretation and works to create a culture of environmentalism through community buidling.