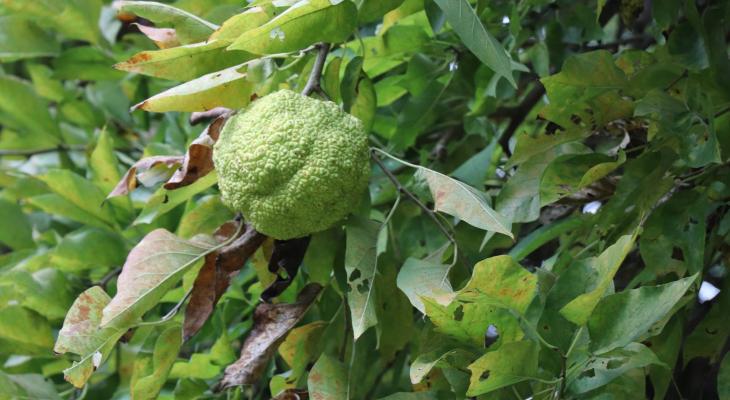 From out in the southwest, in the drainage area of the Red River in Oklahoma, Texas, and Arkansas, came a deciduous tree known as the Osage Orange (Maclura pomifera), often called the Hedge Tree. It was prized for its wood by the Osage Nation of Native Americans, as well as the Cherokee — producing the finest hunting bows available (the only challenger might be the English yew). Indeed, 200 years ago it was said that an osage bow was worth more than a horse and blanket.

As the hedge tree naturalized in the United States, it became prized by Midwest farmers and ranchers. With its sharp thorns, it was planted to make living fences, called hedgerows, before the introduction of barbed wire, and because of its resistance to insects and moisture — better than today's treated wood — it was prized for fence posts. It also found its way into tool handles and furniture.

It was a primary tree in Franklin Delano Roosevelt's WPA project called the "Great Plains Shelterbelt," where 220 million trees were planted, stretching for 18,600 miles. And there are a lot of old farmers around our area who remember as kids being sent out of the farmhouse during the winter months, getting combat pay to prune the lower branches of the hedge trees serving as wind breaks or living fences on the field edges of their family farms.

Osage Orange is an unusual tree with thick and strong roots covered with bright orange bark. It is said by bulldozer operators that it's harder to knock down an osage than an oak. Out in Texas the trees may grow to 30 feet, but here in Illinois, the older ones seem closer to 60 feet. The wood is hard and it sure is tough on chainsaws. When dry, it burns hot, with more BTUs than any commonly available wood in North America. The trees are tough and long-lived. There is an Osage Orange tree at a farm in Alexandria, Virginia that is thought to have been a gift from Thomas Jefferson.

This brings us to hedge apples, which is a common name given to the fruit of the Osage Orange. There are male trees and female trees, but only the females bear fruit. The fruit, like the tree, is unusual; it's a heavy ball, ranging from 3 to 6 inches in diameter, and it has a tough, wrinkled, or bumpy surface, which turns from dull green in the summer to bright yellow-green in the autumn as the leaves fall.

It's full of sticky, acrid white latex or milk (be careful, it just might irritate the skin) along with hundreds of seeds, and it emits an "orange" scent from which the tree derived its name. Squirrels and chipmunks love hedge apples; humans do not, but they're not poisonous. Cattle can choke on them.

Putting whole hedge apples in your house to repel spiders and other critters doesn't work. Purified extracts and oils from the fruit have been shown to repel some insects, but not the entire fruit.